May I have this experimental dance?

Variable Velocity's annual dance show is right around the corner

Fast versus slow. Primitive versus classical. Black versus white. Juxtapositions and contradictions are the building blocks of this year's Variable Velocity performance, "Juxtaposed," taking place June 7 through 9 at the PAC's Spanos Theater. For anyone who's never experienced a show hosted by SLO's experimental contemporary dance group, it may come as something of a shock to watch the deeply philosophical and subtly humorous antics unfold on stage and on chairs in the audience. Basically, Variable Velocity dancers embrace any space they find, refusing to confine or restrict their movement. But it's not just movement, to be entirely precise. The performance group incorporates other artistic media and technology including words, film, and lighting to enhance the message behind their dance. 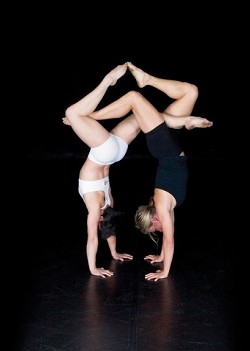 # In January of 2001, Diana Stanton and Jude Clark Warnisher founded Variable Velocity. Since then, they've choreographed a dance show every year, with the exception of 2004. Their troupe of dancers, currently 14 members strong, is mostly comprised of Stanton and Warnisher's dance students (Stanton teaches dance at Cal Poly, and Warnisher teaches at Cuesta). The group's purpose is to represent an alternative to more traditional dance groups. Each June they invigorate, question, play, and re-define, encouraging audiences to follow them along this journey.

"The ideas for a show usually drop in during the cast party of the previous year's show," Warnisher said. "This one came later."

Regardless of when the ideas begin to flow, each show begins with an unexpectedly complex exchange of ideas and thoughts. This year Stanton and Warnisher were considering contradictions, both simple and complex, in everyday life. Basic movements like up versus down and fast versus slow presented interesting contrasts to physically explore. During the choreography and brainstorming period, which can last until a week or so before the performance, all members of Variable Velocity contribute ideas.

"There's usually a lot of what ifs like 'What if we tried this?' or 'What if we did that?'" Stanton said. "The movement of our group is very unique it's based on what we want to say." This year's performance will include eight distinct dance pieces in addition to what Stanton refers to as "interludes," a term which covers a lot of ground. Variable Velocity dancers do not jete around the stage for two hours. They do stand on tables and throw imaginary baseballs at one another. They've also been known to dance on chairs in the audience and verbally and physically disparage the concept of "dancing like no one is watching" on stage.

# One problem with performance groups eager to enter the realm of experimentation is that they can come across as deeper-than-thou. As in, how could you not understand that the three dancers in the first dance sequence represented the spiritual evolution of man through Confucius' 12 tenets of philosophy? But while Variable Velocity dances down many paths, egotism isn't one of them, and there are no right or wrong interpretations of their work.

Not taking themselves too seriously also means incorporating humor into their pieces, sometimes in the form of subtleties you could never imagine would be funny until you see them. Warnisher insists that, unlike many other dance companies, Variable Velocity's dancers aren't afraid of food. Bringing cookies to rehearsal is no cardinal sin, and most of the dancers appear more strong than sylph-like.

Fortunately, their inherent playfulness does nothing to dull the group's natural intensity. Variable Velocity dancers always put on a physical show, incorporating the floor and other dancers' bodies whenever necessary. Their dancing technique is derived from a variety of movement forms, including yoga, Pilates, martial arts, and gymnastics. And the dancers generally emerge from the show with a few more bruises than they went into it with.

# Another unusual element of their performances is the fact that Warnisher and Stanton don't just add lighting and technology to their show they choreograph with these non-dance elements in mind. The technical aspects of lighting the theater become another opportunity for creativity and expression, allowing the group's founders and choreographers to explore different methods of making a visual statement. It's not enough that they're familiar with how the lighting and choreography will interact on stage. They expect the dancers to show the same level of understanding when they move onto the stage an expectation that the committed dancers fulfill.

Despite the many physical and mental challenges of a Variable Velocity show, neither Stanton nor Warnisher is afraid of failure. Given their willingness to experiment, they expect that some of their ideas will meet with greater success than others. The true failure, for them, would be never having explored and expanded the boundaries of what's possible.

"If you're not challenging yourself, then why bother?" Warnisher asked. "Because then you're just putting on a recital."

Variable Velocity Performance Group will be performing "Juxtaposed" at the Spanos Theatre June 7, 8, and 9 at 8 p.m. Tickets cost $22 for adults and $15 for students, seniors, and children and can be purchased at the PAC box office, at www.pacslo.org, or by calling 756-2787.

Arts Editor Ashley Schwellenbach's only fear is a world without chocolate. Send sugared messages to aschwellenbach@newtimesslo.com.