It starts with a classic ’60s Motown opening, the bada-boom-boom drum with tight guitar and organ riff. Then the falsetto back-up voices singing “so long you did me wrong; so long you did me wrong” come in before Mayer Hawthorne’s smooth, soul voice croons, “Baby, what you’re doing now, you’re pissin’ me off. Mmm. But your hair is so luxurious and your lips are so soft, mm-hmm. (Anyway you slice it—ooh) you’re doing me wrong. Mmm. But I love the way you walk now and your legs are so long.” 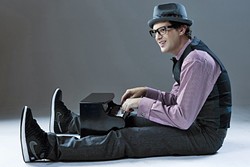 It sounds like classic old-school soul, but the lyrics? Decidedly not ’60s radio friendly: “From the moment that I met you, I thought you were fine, so fine. But your shitty fuckin’ attitude has got me changing my mind, yeah. (Everybody tells me—ooh) I need to let go, I know.
But your cocoa butter skin now has got me beggin’ for more.”

Hawthorne is breathing new life into a genre already rife with great regenerators, everyone from Leon Bridges to Duffy to James Hunter. He grew up in Ann Arbor, Mich., where his dad taught him to play bass by age 5. He cut his teeth hip-hop DJing and rapping but soon segued into soul to create his own samples without having to pay royalties. He also plays almost every instrument on his recordings.

Now on his fourth studio album, Man About Town, Mayer Hawthorne (born Andrew Mayer Cohen, his stage name taken from his middle name and the street he grew up on) is rolling into Fremont Theatre this Thursday, May 5 (8 p.m.; all ages; $23.85 presale at tickeyfly.com or $25.85 at the door).

The Wild Reeds play on Friday, May 6, at Tooth & Nail Winery (5 p.m.; free). Featuring a trio of harmonizing vocalists—Kinsey Lee, Mackenzie Howe, and Sharon Silva—the group plays everything from ethereal folk to country twang to rock, rhythm, and roll.

FMLYBND, Olivver the Kid, and Dark Waves play on Saturday, May 7, at Tooth & Nail Winery (7p.m.; all ages; $12 presale at ticketfly.com or $13 at the door). The vowel-less family band features synths, genre-bending hooks, and trance-inducing gang vocals, according to press materials. 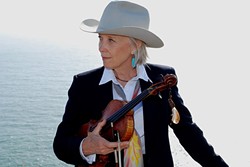 Laurie Lewis is without question among the very best in bluegrass. She’s a two-time California Women’s Fiddling champion and two-time Female Vocalist of the Year according to the International Bluegrass Music Association. She’s also a Grammy Award winner for True Life Blues: The Songs of Bill Monroe (1997). Most importantly, she’s playing Castoro Cellars this Saturday, May 7, for the SLOfolks show (7:30 p.m.; all ages; $20 tickets at 238-0725 or online at castorocellars.com/events).

Lewis was one of the first concerts SLOfolks hosted locally, and this time around she appears with her amazing band Right Hands, which includes some combination of the following gang of players: Tom Rozum (mandolin), Chad Manning (fiddle), Andrew Conklin (upright bass), Patrick Sauber (claw-hammer banjo), Todd Phillips (upright bass), Craig Smith (guitar and banjo), and Scott Huffman (guitar). Each is a world-class player in his own right.

Don’t miss this opportunity to see this living legend of bluegrass, but hurry. I won’t be a bit surprised if this one sells out. As bluegrass musician Tim O’Brien said, “Laurie Lewis’s true songs make this planet a better place.”

This Thursday, May 5, cumbia, reggae, ska, African, Middle Eastern, and flamenco-inspired act Alarma returns to Frog and Peach (10 p.m.; 21-and-older; free). The world music indie rock dance band will have you up and grooving! “We’re excited to be back in SLO from L.A., and this is one Cinco de Mayo event you definitely won’t want to miss!” said band member Alessandro Morosin. “Actually, we’ll first be playing on the Cal Poly campus at 11 a.m. that day. Then we’re gonna play a good few hours of music at the Frog and Peach pub that night. We were very welcomed last time so we hope people keep showing us all that SLO love.”

Silver-voiced banjo princess Erin Inglish brings her dulcet sounds to three all-ages, pass-the-hat Songwriters at Play showcases this week starting Thursday, May 5, at The Shell Café (6:30 p.m.); then Sunday, May 8, Sculpterra Winery (1 p.m.); and finally Monday, May 9, at the Otter Rock Café (6:30 p.m.). Inglish is touring in support of her new album Muse, which includes guest performers such as Inga Swearingen, the Stringtown Ambassadors, and Steve Amadee of The Subdudes. Each showcase will also include several guest performers, playing four-song sets. 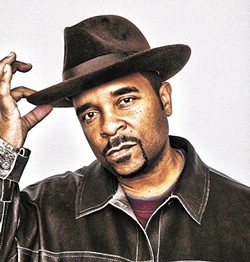 Cuesta College has three events scheduled this week in the CPAC, starting with An Evening of Opera Scenes on Thursday, May 5, at 7:30 p.m. Expect select opera music and stories, from Handel to Verdi. On Saturday, May 7, Cuesta Jazz Ensembles will play live and record their CD Project Concert featuring the Big Bands, student small groups, and faculty starting at 7:30 p.m. Finally, on Wednesday, May 11, the Cuesta Wind Ensemble and their special guests, the Symphonic Winds of the SLO Youth Orchestra, will present a varied program that includes music of Bach, Holsinger, Sousa, and more, also at 7:30 p.m. Ticket information is available at cpactickets.cuesta.edu.

This Friday, May 6, the SLO Presbyterian Church hosts another free brown bag concert at noon. Bring your lunch to Wilson Hall and settle back for a performance by John Pillow, who’s toured nationally as a singer and actor. His performance is called Bach to The Beatles to Bruce and Beyond.

Gypsy Soul returns to the Música Del Río house concert series this Friday, May 6 (8 p.m.; all ages; $20 reservations available at 466-6941 or online at musicadelrio.com). “Before Gypsy Soul first joined us here in 2008, we had heard Cilette Swann and Roman Morykit’s music defined 50 different ways,” concert host Fred Munroe noted. “The only definition that matters has been and still is, ‘Artists who bring blessings to our hearts and ears.’” 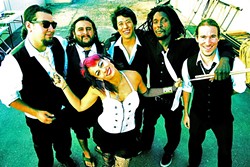 He likes big butts and he cannot lie, “you other brothers can’t deny that when a girl walks in with an itty-bitty waist and a round thing in your face you get sprung!” Seattle-based rapper and producer Sir Mix-A-Lot plays San Miguel’s The Ranch this Friday, May 6 (8 p.m.; 21-and-older; $15 to $19 tickets available at liveattheranch.com). He hasn’t released a new album since 2003’s Daddy’s Home, but as long as he plays “Baby Got Back,” who cares?

Get your Perfect Pitch on! Cal Poly a cappella ensemble That’s the Key performs its spring concert on Friday and Saturday, May 6 and 7, in Room 218 of the Davidson Music Center (Building 45 on the Cal Poly Campus) at 8 p.m. (all ages; $5 at the door). This tight vocal harmony group includes 14 singers offering vocal arrangements of popular music. 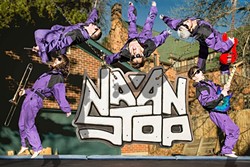 California meets Scandinavia in the husband and wife duo To Wake You— comprised of Mark Davis and Karoline Hausted—one half of the local ethereal folk pop act Shadowlands. They recently released their debut single “Not Gonna Fall,” a lush love song. “The initial year of the relationship was spent mostly on opposite sides of the globe,” according to their bio. “It became a time of writing songs to and with each other, about the longing between them, the accompanying fears, and the mysterious nature of love.” Together now for eight years, they’ll debut this intimate collection of songs on Saturday, May 7, at Steynberg Gallery (7:30 p.m.; all ages; $12). Girls + Boys opens the show.

If you were a fan of the vibrant music scene at Pismo’s Vino Versato, don’t panic! The wine bar and music venue has been sold to Charlie Puffer, who plans to continue the fun under a new name, Puffer’s of Pismo. “The first show under my stewardship will be Sunday, May 8, Mother’s Day, featuring LA based saxophonist Chuck Manning with Adam Levine on guitar, Ken Husted on acoustic bass, and Dean Giles on drums,” Puffer said. “The show will be from 5 to 8 p.m. and there’s no cover. Food, wine, and music? Three things everyone needs! 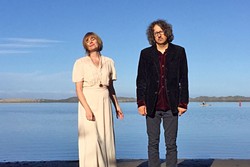 LA-based Oliviero plays “indie-rock, experimental folk, post-rock, minimalism, ambient, and post-classical music,” according to the Maine-born singer-multi-instrumentalist’s bio. See him Monday, May 9, at Otter Rock Café (6:30 p.m.); and Thursday, May 12, at Shell Café (6:30 p.m.). Both shows are all ages and free.

King Ropes started their upcoming album, DIRT, in Brooklyn, and they plan to finish it this summer in Venice, and in between they’re going to lay some of those songs on you when they play Linnaea’s Café this Tuesday, May 10 (7 p.m.; all ages; pass the hat). Expect lyric-driven rock songs “inspired by struggle and hope, weather, and the human condition; layered with textures and melodic hooks and words that stick like a bur,” according to their press materials. 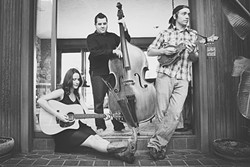 Boulder, Colo.-based high-energy reggae-rock band Na’an Stop is headed to Frog and Peach this Tuesday, May 10, for Pint Night with The Olès (10 p.m.; 21-and-older; free). This is Na’an Stop’s third time through SLO Town, and they’re linking up for a three-show tour with Santa Barbara’s fellow rock-reggae act The Olès. Expect a blend of unique original music with crowd-pleasing covers.

The Salty Suites headline the Wednesday, May 11, Wine-Down Wednesday series at Sculpterra Winery (6 p.m.; all ages; $15 or $10 for wine club members on brownpapertickets.com). The L.A.-based acoustic trio will deliver traditional folk and bluegrass numbers with three-part vocal harmonies. The incomparable Phil Lee opening will open the show.