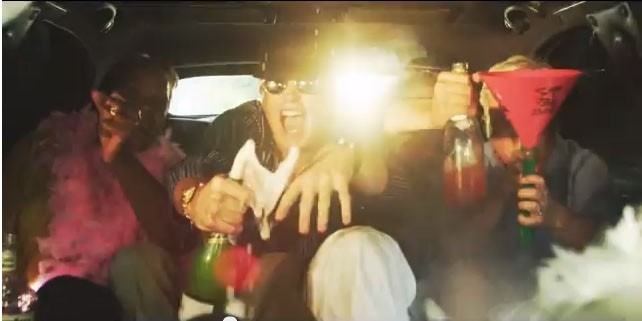 Who knew that being a daytime regular at McCarthy’s could lead to fame, stardom, and also getting really drunk?

That’s just what happened to a group of folks enjoying a quiet day-drink at this San Luis Obispo watering hole, when hip-hop artist Ray Myles rolled up. Myles was shooting the video for his song “Blacked Out” from his debut EP FlopHouse, and appears to have simply rounded up all of the available McCarthy’s regulars as extras.

The opening of the video (professionally shot and edited, from the look of things) sees a passed-out partier woken up by a phone call from his aunt, who says she was supposed to go wine-tasting with some friends, and now she can’t make it, so can he just go instead? In about 15 minutes? Friend calls up Myles; Myles is pretty much like, “I’m there,” and the next thing you know, he’s rapping in a limo surrounded by middle-aged McCarthy’s patrons, standing in for the aunt’s friends. Gorgeous, gauzy lighting. Slow motion. Champagne.

Soon enough, things start to get hazy, starting off with some dirty dancing, and some shotgunning of beers by respectable-looking folks who most likely have adorable grandchildren. Now Myles is rapping in a wine cellar. (Central Coast, biotch!) Cut back to the limo, where a beer bong is proudly held aloft by someone statistically too old to know what that is. Someone glugs a thing of boxed wine. Elsewhere, a May-December make-out session ensues, and it’s beautiful. Things only get drunker from there. See if you can spot someone you know at youtube.com/watch?v=VlZSRNI0yqU. (WARNING: The video features explicit language and shows people drinking.)

“Blacked Out” is a single from Myles’ EP FlopHouse, which you can check out on iTunes and Soundcloud. Find out more at raymyles.com or Facebook.com/raymylesmusic.