Longtime Atascadero City Manager Wade McKinney has accepted the city manager position in the moneyed desert oasis of Indian Wells, the city of Atascadero announced in a May 31 press release. 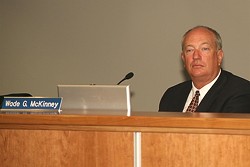 In Indian Wells, McKinney will inherit a position with a troubled history. In late 2011, former Indian Wells city manager Greg Johnson resigned amid an abuse-of-power controversy. In addition, Johnson was pulling in more than $250,000 annually in base salary at the time—augmented further by opulent perks and benefits.

Indian Wells has employed various interim city managers since Johnson’s resignation, and McKinney is the first subsequent permanent hire. His employment agreement is a five-year deal, and came after a five-month-long search by Peckham & McKenney—a recruitment firm for executives that sifted through 75 applicants.

McKinney has been city manager of Atascadero since August 1997. The Indian Wells City Council is expected to approve McKinney’s employment agreement in a June 6 meeting. Pending that approval, McKinney’s last day in Atascadero will be June 30, and he’ll start in Indian Wells the next day.

The press release stated that McKinney, when submitting his resignation to the Atascadero City Council, told them that although he and his wife Cheryl would miss the “wonderful sense of community” in Atascadero, they are “looking forward with great excitement and anticipation to this next chapter in our lives.”

“[Speaking as] mayor, Wade’s decision is a significant loss to the city,” Atascadero Mayor Tom O’Malley said in the press release. “However, as a friend, it is the right move for Wade at this stage of his career.” McKinney did not return a request for comment.

Indian Wells is a desert resort city rife with golf and tennis facilities, as well as luxury hotels. It has only roughly 5,000 full-time residents, but that population swells considerably during the winter months.