The attorney for the family of Kevin McLaughlin, whose 2017 death in SLO County jail has been the focus of a denial-of-care lawsuit and part of an ongoing FBI investigation of the jail, is disputing claims that the parties settled the case last week.

At the Board of Supervisors' Oct. 22 meeting, County Counsel Rita Neal reported that the board had approved a negotiated settlement with the McLaughlins during the morning's closed session, agreeing to pay the family $41,850 without further liability. 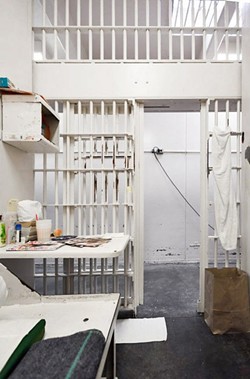 But that same morning, the McLaughlins' attorney James McKiernan notified county lawyers via email that the family had withdrawn their support for the settlement, according to a copy of the email shared with New Times.

"The plaintiffs, after further considering the county's offer to settle, now withdraw their acceptance," McKiernan wrote on Oct. 22 just before 11 a.m, adding that the board's approval had "not yet occurred [or been] conveyed."

It's unclear exactly when the supervisors voted on the settlement or when county officials became aware of McKiernan's letter. Neal told New Times on Oct. 30 that the board had approved it and the county considers it final.

"If plaintiffs' attorney contests the settlement, the county intends to make a motion with the court to enforce the settlement," Neal said via email.

McKiernan, in an Oct. 30 press release, contended that the case "has not been settled and will proceed to trial."

"The four attorneys for the county were advised of the plaintiffs' rejection of the county's offer before it was approved by the Board of Supervisors," McKiernan said.

Kevin McLaughlin died behind bars on April 13, 2017, at age 60, of a heart attack while awaiting sentencing for a felony assault charge. According to a death investigation report, he had complained to jail medical staff of having trouble breathing and experiencing numbness and pain in his arm and shoulder, and he asked to go to a hospital. In response, jail officials gave him Tylenol and sent him back to his bed. He died of a heart attack less than an hour later.

In 2018, the McLaughlin family sued the county for denial of medical care and negligence after the county rejected an administrative claim. The county denies the allegations.

"[Kevin] complained to jail staff of multiple classic heart attack symptoms that would otherwise have required him to be rushed to an emergency room code red," McKiernan's press release said. "Dorothy McLaughlin, the decedent's 85-year-old mother, will continue on with the grueling court process to see that justice is served for her dead son and others in the county jail." Δ