by Peter Johnson and Chris McGuinness

In the final weeks leading up to the Nov. 6 elections, the campaigns for and against Measure G—the local initiative to ban fracking and new oil and gas wells in San Luis Obispo County—are throwing around their full financial weight to sway voters' minds.

But one campaign is 32 times heavier than the other. 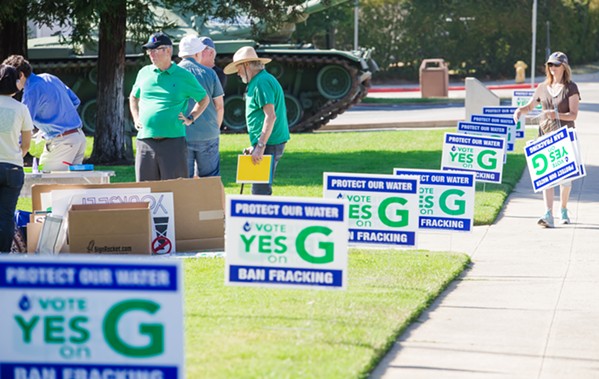 Local residents should expect more mailers and advertisements to hit their mailboxes and digital screens all the way up to Election Day. While No on G has already spent $6.2 million, the campaign still has $2.2 million in cash on hand. That's compared to $42,134 for the Yes on G group.

"[Representing] more than 90 percent of SLO County's production, we stand keenly interested in the outcome of Measure G," Christine Halley, Sentinel Peak Resources' director of environmental health and safety, said in a statement to New Times. "Our employees and contractors that work in support of your energy production join in this interest."

While both campaigns work to get their messages out to the public, Yes on G backers have been critical of No on G's rhetoric and tactics. Members of the campaign have accused the opposing campaign of spending some of the millions of dollars they've acquired to trick progressive and Democratic Party voters into voting against the measure.

In late October, Yes on G supporters began circulating photos of slate mailers aimed at progressive and Democratic voters, but urging them to vote "no" on Measure G. Locally, both the SLO County Democratic Party and the SLO Progressives have endorsed the measure.

"I have gotten a lot of calls from people," Varni said. "They're outraged at it."

Those mailers include one from a group called "Feel the Bern," a term coined by supporters of 2016 Democratic socialist presidential candidate Sen. Bernie Sanders (I-Vermont). That mailer suggests recipients vote for Democratic Party candidates like Gavin Newsom and Xavier Becerra, and yes on Proposition 10, a statewide measure that would allow cities to enact rent control, but also includes a suggestion to vote no on Measure G. Another mailer touting itself as a "Democratic Voter Guide" included something similar, showcasing SLO Mayor Heidi Harmon, who supports Measure G, while also promoting a position against Measure G.

According to campaign finance filings, the two mailer companies received roughly $6,000 from Winner & Mandabach Campaigns LLC, a consulting company working with the No on G campaign. The records also showed that the SLO Progressives paid $1,270 to put Harmon on the mailer for one of those companies.

Matt Cunningham, spokesman for the No on G campaign, pointed out that Harmon's name appears on a "Republican Voter Guide" mailer. Harmon told New Times she was unaware her name was on the mailer.

"Is the Yes on G campaign calling her deceptive?" Cunningham said. "This is a nonpartisan election and we're informing all voters, regardless of party affiliation, about how Measure G will shut down existing oil and gas production in SLO County."

While the mailers have been called deceptive, Varni acknowledged that they're not illegal. Both include a disclaimer noting that the guides were not prepared by an official party, and use asterisks to show that the No on G and Harmon suggestions were paid for by a campaign.

"I think for me, the mailers may be the clearest symbol in this campaign of the lengths at which Big Oil will go to achieve their goal," Vanri said. "Their willingness ... to trick people into voting no on G is just indicative of a real lack of moral and ethical grounding that I think for a whole lot of people in the county was kind of a final straw." Δ