But this year, the program and its artistic director are using that creative acumen to adapt to a bizarre and unprecedented fall semester disrupted by a pandemic. With classrooms and theaters closed indefinitely due to COVID-19, valle has pivoted the drama program to a brand-new medium—podcasting—with current social and political events shaping its focus.

"We've decided that we're creating a podcast that interrogates policing and the Black Lives Matter movement in the U.S.," valle, a Cuesta professor since 2001, told New Times. "Our performance, which we're really excited about, is in response to the May 25 murder of George Floyd. When Mr. Floyd got killed, obviously there was a huge change in culture." 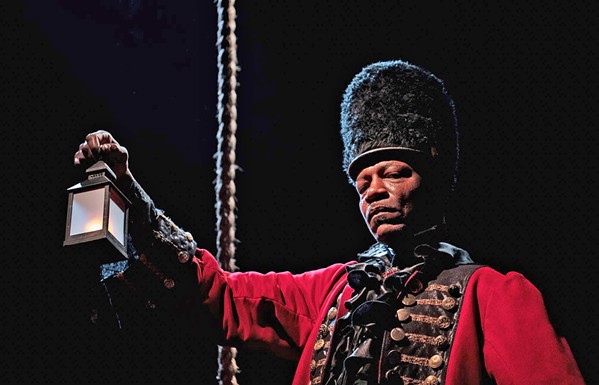 Producing a podcast presents a whole new challenge for both faculty and students—but that's in keeping with a program that's never shied away from creative risk. While virtual classrooms on Zoom are useful for conducting certain acting courses, like camera acting and script analysis, valle said podcasting is a much better medium for an online production.

"The other option is to do a play over Zoom with everybody in little squares, and I can't actually stomach that anymore," valle said. "It's a good way to continue to hone your craft as an artist, but the reality of it is it's difficult for the audience to sustain their attention on a screen like that."

Valle said that the podcast, which students will produce as a series over the semester, will have its "footing in something similar to what you can hear on NPR," but will take on a life of its own combining historical reenactments with journalism-style storytelling and interviewing.

The themes of the project—the Black Lives Matter movement, protests against racial bias and police brutality, and their historical context—solidified for valle after the death of former congressman and civil rights leader John Lewis, who passed away in July.

"That was a pivotal moment for me," she said. "The day after, his family published in the newspaper a note from John Lewis. It was all about remembering history, that history has lessons for us today. It's about memory and how we remember events and how we get amnesia."

One of the historical events that Cuesta students will bring back to life in the podcast is the 1970 Jackson State University massacre. Happening just 11 days after the more widely known Kent State massacre, which occurred amid Vietnam War protests, Jackson, Mississippi, police opened fire on a group of Black students around midnight, killing two and injuring 12 others.

"Jackson State University students were not protesting," valle said. "They weren't doing anything actually. They were just hanging out outside of their dorm. It was basically a message they were sending to Black people. And it was kind of a blip on the media scene because it was Black students."

For that episode, Cuesta students are interviewing survivors of the shooting and the widow of one of the slain men. For another episode, about the history of tear gas, students interviewed police chiefs—including outgoing SLO Police Chief Deanna Cantrell, who recently authorized the use of tear gas against local protesters—as well as scientists and scholars. Another episode discusses the legacy of Emmett Till, a 14-year-old Black boy who was lynched in 1955 after being accused of flirting with a white woman. Interspersed through all of the interviews are students performing lines from historical documents, videos, and recordings.

"Actors are storytellers," valle explained. "We have actors reading some of the script. We're taking real pieces of text that have been said in different videos that we've seen of the protests. We're taking quotes from newspapers and things like that, and we're having our actors say those quotes. So we're taking print material and breathing life back into it and telling the story that way."

She expects the first episode in the series to publish sometime before the November election. She added that the project could extend into next semester if COVID-19 restrictions continue in 2021.

With the pandemic upending every facet of the performing arts industry, including Hollywood, valle hopes students will learn new skills that will help them adapt to a post-COVID-19 world. And have some fun while they're at it.

"This is all an experiment. We've never done anything like this," she said. "But we're always looking to challenge ourselves in new directions. And our students are stoked." Δ