Whimsical, playful, and fresh (the food's good too) 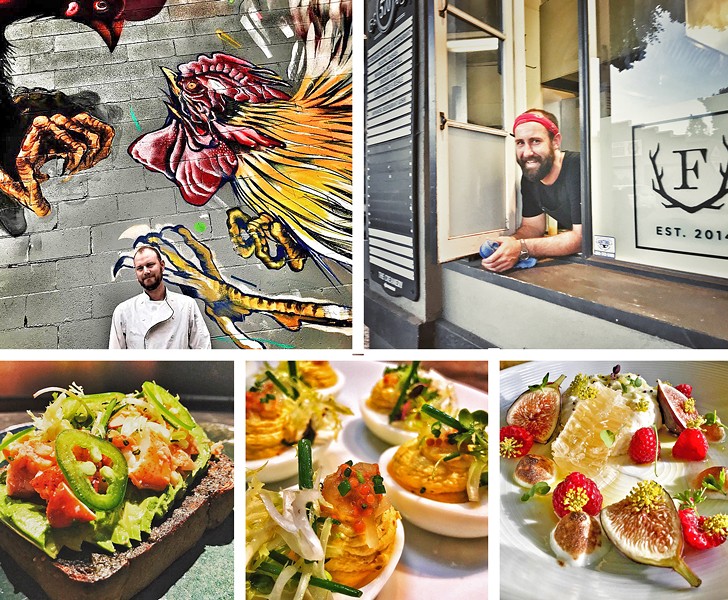 Are you digging what these chefs are putting down? Go say, "Hey." Foremost Wine Company is located at 570 Higuera St. in SLO and open for dinner Tuesday, Wednesday, and Thursday from 6 to 9 p.m. and Friday and Saturday from 6 to 10 p.m. Happy hour is 5 to 6:30 p.m. Tuesday through Saturday at the lounge and wine bar. For more information, go to foremostslo.com or call 439-3410.

I can't remember the last time I had so much fun at an empty restaurant. It's 11 a.m., Foremost Wine Company is preparing for the night's customers, and I am fortunate enough to be seated in the middle of their vast dining room, surrounded by foliage and fantastic smells.

The first dish that arrives sets the tone: a happy little deviled egg with pickled mustard seed, cornichon pickle, chive, and compressed apple. It's served on a slight wooden board accompanied by a simple crostini smeared with zesty pimento cheese and bright peppers.

In two sloppy bites, both apps are gone, and my appetite—and sense of adventure—are totally aroused.

Next, comes a plate adorned with a single octopus tendril and a side of warm farro salad that melts in my mouth instantly (the octopus, cabbage-brined and meaty, has a slightly smoky vibe). Bright green, nickel-sized polka dots of kale, butternut, and pumpkin seed pesto also speckle the plate, turning my meal into delicious pop art. And as we all know, pop art is not meant to be viewed from behind a velvet rope. It's for everyone.

Since opening in 2014, Foremost Wine Company has always been fresh and farm-to-table, but it hasn't always been this playful, fun, or whimsical. You can credit this recent transformation to the restaurant's two new chefs, Andrew Cross and Drew Vaughan, who are just as fun themselves.

As soon as the interview begins, we're laughing, joking, and swapping stories about travels, music, and dreams. The guys, both in their 30s, share more than three decades of cooking experience between them, proving that two chefs are infinitely better than one.

Both have come to SLO to take on the mission of transforming Foremost from "date night" spot to "any night" hangout.

In the process, they've also become fast friends. It shows on their faces, but it shines even brighter in their creative collaboration. Their new menu—unlike anything you've ever seen at Foremost—is a partnership of charming Southern comfort and refreshing Pacific Northwest passion.

Executive Chef Cross is a native of Sequim, Washington, and was raised in a family who farmed.

"My parents were hippies," Cross says. "It was all organic, sustainable. We had chickens, ducks, rabbits, bees, goats, sheep, cows—the whole gamut. Bacon was raised and cured, potatoes were home grown, everything was from the farm. This was just how I was raised. This was just how we ate."

Every Sunday was a special day for the Cross family.

"Before church we would go out to the bay, dig up clams, and let them soak in a bucket. By the time we got back from church, the clams would have purged their shells of sand and would be ready for my mom to make fresh clam chowder."

As if that didn't seal the deal on the young man's future career, the chef's grandmother on his mom's side was a cook, and his grandma on his dad's side was a pastry chef.

Could Cross have become anything but what he is today?

Over the past 17 years, he's made upscale French food under chef Daniel Boulud in Palm Beach, lent his skills to Picán in Oakland (and worked for free at Chez Panisse in Berkeley for a stint), performed sous chef duties at Canlis in Seattle, and, more recently, worked in Denver.

Partner in crime Chef de Cuisine Vaughan, originally from eastern North Carolina, is a master of barbecue. Look for the "hickory smoked North Carolina pork croquettes" on the menu, and you'll see what I mean.

"I'm fond of the particular kind of barbecue I grew up with. It's a vinegar based, no barbecue sauce, spice rub," Vaughan says. "The idea with food is to have fun with it. I feel like a lot of chefs have something to prove, but I just want to cook good food."

That's not to say that Vaughan hasn't had his own impressive career. He started cooking as a teen, went to culinary school in New York City (where he landed a job cooking at a high-end cocktail bar), and went on to cut his teeth at the now defunct Brine and Bottle in North Carolina.

"It was high volume; we got our asses kicked nightly," the chef says, adding that he worked at Wolfgang Puck catering in LA until he "couldn't stand catering anymore." A detour into the world of cooking on West Coast yachts left him disillusioned and seeking more.

"It's odd when you're finally doing something you dreamed of, but it's not what you really wanted after all," Vaughan says. "I had some friends in Morro Bay, and I ended up just staying there. I had worked in so many cities and what really brought me to SLO was the fact that Foremost felt like family."

Over this past summer "the Drews" have overhauled Foremost's menu with an eye toward creating modern small plates you can easily mix and match without thinking too hard.

Mains—grilled petite tenderloin with blue cheese and mushrooms; roasted duck with fennel slaw; braised lamb with pumpkin pappardelle—offer satisfying portions that still leave you feeling light, not bloated. With quick, munchable additions like avocado toast, truffle popcorn, roasted Brussels sprouts, and even mac and cheese, the chefs have added a shot of levity to the eatery's beautiful—if not slightly cavernous—dining space.

Longtime fans should know that the beloved charcuterie bar is still in full effect, (manned by the gregarious Rachel Owens) and you can still get that super fresh burrata infused with seasonal goodies like honeycomb, roasted squash, and candied pumpkin seeds.

"When we took over, there were 14 dishes on the menu. Now, there's 24. We want people to have a few bites, enjoy the company they're with, drink a few glasses of wine, and hang out for a bit," Cross says.

One small plate you might not want to share? The roasted bone marrow, which is as lovely to eat as it is to look at on Instagram. This carnal treat encourages you to dip a small spoon into the bone, harvesting the rich, roasted marrow, which is topped with garlic and Meyer lemon gremolata, pickled Japanese mushrooms, and micro greens.

Scoop up a dollop and smear onto a crostini. Repeat.

The baby greenery (which looks a lot like moss) and perky mushrooms create a rustic storybook effect.

"We call it the forest floor," Vaughan says with a laugh. This is one of about a bajillion little inside jokes the guys share (as they both tell me, 'There's a lot of us saying to each other, 'Get out of my head!'").

Truth be told, the 33-year-old chefs were born just 11 days apart. They go to the farmers' market together, cook together and—of course—laugh together. This is what you'll see—and taste—when you come back to Foremost this fall.

"We're excited to give Foremost a new face. Eating out should be fun and lively, full of laughter," Vaughan says.

Adds Cross, "We're just both on the same wavelength." Δ

Hayley Thomas Cain is all about collaborating when it comes to food. Contact her at hthomas@newtimesslo.com