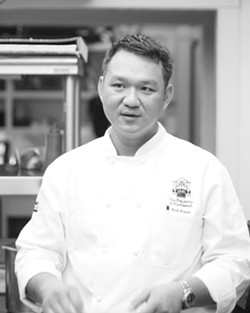 # I first heard about chef Budi Kazali from my friend Jim Adelman, winemaker at Au Bon Climat and Qupe in Santa Maria Valley. I was thrilled to learn of Kazali's new restaurant: The chef had worked as sous chef to the Food Network celebrity chef Ming Tsai at Blue Ginger restaurant in Boston. Kazali had recently moved to the Central Coast and purchased the quaint Ballard Inn and Restaurant, near Los Olivos. His fabulous Asian and French cuisine started attracting more local winemakers than it did tourists who come to experience Sideways wine country where the Oscar-winning movie was filmed.

Most winemakers, after all, know good food like they know good wine. And they had reason to frequent this outstanding restaurant: Kazali's food is exactly what you'd expect to be served in the finest restaurants in San Francisco or L.A. When I first met the chef two years ago, he said candidly: "I don't like the label 'fusion.' It's outdated. I call it East/West borrowing from each country, mostly French and Asian, that gives me great freedom."

I was already a fan of Ming Tsai's cookbook Blue Ginger, a reliable source for preparing authentic Asian dishes. Although I'd never experienced his Boston restaurant, I was eager to try Kazali's cuisine. I visited the Ballard Inn with sky-high expectations. Admittedly, such lofty ideals sometimes result in rock bottom disappointment--but not here. With each meal during three dinners, I was blown away by the foods the talented chef was sending out of the kitchen. His cuisine was consistently impressive.

That was two years ago, and I held off reviewing it since it's off the beaten path for San Luis Obispans planning to enjoy dinner out. However, two recent dining experiences at the Ballard Inn and Restaurant were extraordinary and inspired me to share the news of this local celebrity.

Every nice dining room should have servers as knowledgeable and personable as the staff led by dining room manager Hans Wolff. Not only do they know the food, they know the wine list. I was impressed to see Kazali come out of the kitchen every so often to talk with guests at each table. Few people knew of his background when he purchased the inn and restaurant, but he said: "As word got around, it started bringing in more business."

Kazali's dining room--filled with antiques, original art, and a crackling fire in a three-sided open marble fireplace--is comfortably elegant. Although it looks like a historic estate, the inn isn't very old and offers the modern conveniences we expect in contemporary hotels. Naturally, few locals would book a room. But the fine Pacific Rim cuisine makes this extraordinary place well worth the 50-mile drive from San Luis Obispo.

"People are afraid it's fine dining and expensive," Kazali reported on my first visit.

Well, it is fine dining--but without the outrageous price tag that's usually attached. Portions also seem generous, such as the spicy octopus salad with Korean chili-garlic dressing ($11) with several slices of tender octopus topped with a mound of bitter greens in an intriguing sweet and spicy dressing (but not pungently hot). His new style hamachi sashimi with avocado and soy-yuzo vinaigrette ($13) was among the best I've eaten anywhere in the world (and I travel frequently).

My husband, Dan, who orders salmon everywhere we dine, loved Kazali's organic version with an irresistible truffled chive risotto and miso broth ($29). He orders salmon rare and rarely ever gets it that way--here, the kitchen sent it out perfectly cooked. I had the Ballard Inn fruits de mer: tender scallops, prawns, clams, mussels, and calamari, in a shiitake-leek fondue and coconut, saffron nage ($28). As much as I loved it, I kept trading bites with Dan to get more of that wonderfully rich risotto.

Unlike the many chefs who relocate to the Central Coast because of the excellent wine regions, Kazali had different reasons for moving here after working in San Francisco and Boston. He grew up in Santa Barbara. After earning a business degree there, he enrolled in the California Culinary Academy (CCA) in San Francisco. A chef with innate talent can open an outstanding restaurant without going to culinary school just as a culinary grad can fail to impress despite his or her years of training. Kazali has both the talent and the impressive resume.

After graduating from CCA in 1992, Kazali started cooking professionally in San Francisco's finest restaurants, including Campton Place with chef Bradley Ogden (I interned there in 1988 while enrolled at CCA), and at La Folie with chef Roland Passot. The latter is a French restaurant owned and driven by a native Frenchman who had a reputation at CCA for his rigid standards. He scared most of the weenies among us away, which I'm sure is exactly what Passot wanted. That's why I'm impressed Kazali was hired by Passot.

After working in San Francisco, Kazali moved to Boston where he became sous chef at Ambrosia Restaurant. Hired by Tsai to help him open Blue Ginger, Kazali stayed with the charismatic television star for three years. When he quit, Kazali returned to San Francisco to work at Gary Danko Restaurant with another of the city's most highly acclaimed chefs. Kazali said he wanted to move back home with his wife to raise their two children here. That's how he came to buy the inn and restaurant that was formerly named Cafe Chardonnay.

Dan and I rarely order dessert, but decided we had try something here. Kazali's blood orange sorbet, one of a trio with a lime and a coconut sorbet ($6), was another creation I can report was the best I've ever had. And no chocoholic should think of skipping the intensely flavored warm chocolate cake with homemade vanilla bean ice cream ($7).

With all of the winemakers hanging out at his restaurant, it's easy for Kazali to compile a terrific wine list that offers gems from Santa Barbara County's finest wineries, including Au Bon Climat, Beckman, Curran, Foxen, Margerum, and Rusack. It also offers great Champagnes, French and German selections, and a wine or two from Paso, Napa, and Sonoma, none of which are exorbitantly marked up.

"We get a lot of people who are wine connoisseurs who want fine wines paired with the food," Kazali explained.

The wine list features about 20 white and red wines that can be ordered by the glass (averaging $8 to $12 each). Kazali said he does most of the food shopping himself.

"I keep the menu changing, otherwise I get bored," he explained. "We introduce one or two new things at a time so the cooks can get used to [preparing] it. I like to give everyone a change to try something new."