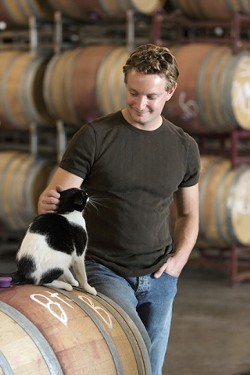 # Visiting Domaine Alfred in late August, I finally met their new winemaker Fintan "Fin" du Fresne and found that he was feeling pretty enthusiastic about the 2007 harvest. A day earlier, he brought in his first grapes: four tons of Pinot Gris, which kicked off their harvest in Edna Valley. The Pinot Noir was still a good two or three weeks away, he reported, but everything about this year's growing season indicated a good vintage:

"I'm excited about this year compared to the 2006 harvest, which was so late after the cool summer. It was a tough year for Edna Valley," du Fresne admitted.

A native of New Zealand, du Fresne joined the Edna Valley Pinot Noir specialist Domaine Alfred (DA) just before harvest in 2006. Just beginning his second harvest at DA at their new production facility on Orcutt Road, he compared this year's even growing season to last year's atypical season of irregular temperatures. He has good reason to feel confident.

"This year we had the right conditions throughout the early season berry development. It was the right amount of fruit set, and the grapes have good color and flavor, the numbers are really looking great," he enthused.

When an unexpected thunderstorm hit SLO County one week later, I called du Fresne for an update and he reported: "The brief thunderstorms were worrisome at first, but the warm winds that followed quickly dried the clusters, reducing the possibility of mildew problems."

During our meeting, he invited me to taste his three new 2006 DA white wines, proving talent can overcome the wrath of Mother Nature. The wines were refreshingly crisp and fruity just the ticket for my taste preference lately. But they're far apart from the rich Burgundian style DA owner Alfred "Terry" Speizer favors. However, he understands a winemaker's inclination to follow his heart. No surprise: du Fresne leans toward the crisp, fruit-forward style of New Zealand's white wines, particularly so with the Chardonnay dubbed "Stainless" that du Fresne describes as "unencumbered by oak."

"I'm a big fan of the stainless-steel style," du Fresne explained while snapping the caps off the bottles. "I like crisp, fruit-driven Chardonnay, and I wanted to do this from day one."

Those who prefer rich Chardonnays needn't worry: du Fresne still makes the estate and Califa (the proprietary name for reserve selections) Chardonnays that DA fans have come to expect.

Of the three samples, I favored the Pinot Gris. Lately I've been enjoying outstanding versions of this delicious varietal from California, Oregon, and France. DA's was aged in neutral French oak with the exception of one new barrel, which gives it a slightly creamy texture. It offers an impressive array of nectarine, ripe apples, and citrus flavors with nuances of minerals, spice, and honey. The Vin Gris of Pinot Noir a lovely Rose that DA describes as tasting like "Jolly Rancher candy" offers ripe red fruit flavors highlighted with Meyer lemon notes. All three well-balanced wines, much too drinkable alone, will complement an array of dishes (available in wine shops and at DA's tasting room).

The charming du Fresne, only 28, doesn't have many seasons behind him, but he's certainly made the most of his career since college. After earning graduate degrees in geomorphology (the study of landforms) and geology, he received a post graduate degree in viticulture and enology at Lincoln University in New Zealand. After college, he spent two years working as a geologist in Denmark, Scotland, and North Africa. In New Zealand, he worked at three wineries: Martinborough Vineyards in the cool climate Marlborough region (which he believes produces the best Pinots in his homeland), at Matahiwi in Masterton, and at Ngatarawa in Hawke's Bay.

In 2001, du Fresne moved to California to work for winemaker Josh Jensen, founder of Calera near Hollister. He's considered a leader in California Pinot Noir, and du Fresne praised Jensen for his experience, knowledge, and down-to-earth attitude. While there, du Fresne worked with another young talent, Terry Coulton, now winemaker at Adelaida in Paso Robles.

In 2006, du Fresne relocated to Paso to work for Coulton, but moved nearby to help the owners of Thunderbolt Junction revive Paso's historic HMR estate. That's when Seizer called to offer him the winemaker position at DA. Recalling the moment, du Fresne said: "When Terry called, I realized this opportunity wasn't going to come up often. It was a bit of dream come true."

DA's previous winemaker, Mike Sinor, was first onboard. He left to focus on his label, Sinor-LaVallee in Edna Valley, and the new value-brand Ancient Peaks at Santa Margarita Ranch. As wine connoisseurs know, Sinor's 2004 DA estate and Califa Pinot Noirs rated 93 and 96 points, respectively, from Wine Spectator's critics. The day those ratings were published, www.domainealfred.com registered 754 hits from wine collectors nationwide. Recently, the 2004 Syrah Califa was named best red wine by Decanter magazine. DA's new winemaker has huge shoes to fill. But after getting to know du Fresne and hearing about his plans for DA's Rhone wine program, he's proved he's got moxie.

"We're going to give John Alban a run for his money," du Fresne said, grinning confidently.

Speizer noted that his only two winemakers have much in common: "Fin and Mike share a lot of, shall we say, idiosyncrasies," Speizer chuckled. "They remind me of each other."

When asked, how so, Speizer explained: "Both of them pay a lot of attention to detail, they're willing to get their hands dirty, and no hill is too big to go climb."

Speizer, who spares no expense with DA, considered 36 winemakers before deciding on du Fresne.

"Among them, I interviewed 22 Napa Valley winemakers who wanted to learn to make Pinot Noir," Speizer said. "I was reluctant to pick someone without Pinot Noir experience."

Du Fresne believed he was chosen for three reasons: "My viticultural experience and passion for vineyards was first second was my Pinot Noir experience and third, my cool-climate experience."

He has no plans to change what's clearly right for this ultra premium estate. While admitting seeing room for improvement, he doesn't feel he needs to alter DA's signature style.

"Sticking with the house style is no problem. This is the ninth winery I've worked for. You learn there's no right way to make wine, but there are definitely some wrong ways," du Fresne said. "I've learned not to be pigeon-holed, and my experiences have given me the knowledge and ability to make many styles of wines."