Meet the wizard himself: Pancho and the Wizards will bust out of the garage in 2017

Editor's note: Glen Starkey is on vacation so Flavor writer Hayley Thomas Cain is stepping in for a couple of weeks.

The hardest thing about performing live music isn't getting the chords right or remembering where the bridge starts. It's not remembering to shout out the promoter or schmooze with the headliner. The hardest part is always staying present, being in the moment, savoring the energy in the room, and knowing that it'll never be quite like it is on this particular night. It's about living the magic while you're on stage and transforming mere "attendees" into accomplices. 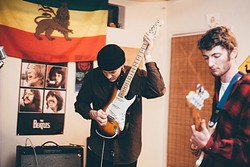 Although Tristan "Pancho" Cole Wildey is on the young side—20 years old, braces and all—he's got the hard part down. The music rushes over the guitarist like a waterfall, and damn if it isn't fun to get drenched in the splash zone.

Dancing to his frenetic garage rock three-piece outfit Pancho and the Wizards (originally formed last year with friends Liam Kitchen and Trenton Class of Royal Suns) is a uniquely energetic experience. Go listen to their 2016 self-titled release, recorded at Lompoc's Certain Sparks Studios, and crank that sucker loud (download at bandcamp.com). You will understand firsthand how it beautifully crosses your wires and hits all the dirty, chaotic sweet spots in your soul. This is the sound of SLO's underground garage scene, and it's a lively ecosystem, to be sure.

Wildey's bluesy, ballsy rock 'n' roll is intentionally left rough around the edges: One part soul, one part punk rock embrace, and a whole lot of danceable beats. Yes! I have actually seen real live millennials of my generation and younger dance to these tunes, which is no small feat in this chilly, modern world we live in.

"Cowboy Song" off the self-titled release is a party-starter jam that begins with upbeat drums, a fat walking bassline, off-the-cuff chatter from the band, and three infectious chords—defiant yet classic in their simplicity. Wildey shouts out the lyrics like a crazed preacher from a different era. Listening to this song, you feel like you're in the garage with the guys on a weeknight. There's magic in this utter approachability.

We chatted at the top of the projection booth of the Fremont Theater, where he works to set up concerts (hauling gear, hanging lights, handling larger-than-life rock stars, grunt work; he does it all). Looking down at the vast stage, I can't help but imagine the new incarnation of his band—with Aaron Wick of Jagged Jubilee on drums and high school buddy Quentin Karamitsos on bass—rocking the place into a sweaty jelly. That's exactly what Wildey plans to do this Feb. 23 with mega accomplices The Garden, The Frights, and the Regrettes (all ages; Good Medicine Presents/Numbskull Productions; tickets at ticketfly.com).

These headlining bands are SoCal legends and rising stars, but Wildey isn't tempted to go where the action is. He's lived in the Village of Arroyo Grande for most of his life, and likes it that way.

I ask him how he got started in music. It's a common story for this area, where so many enter rock 'n' roll through Jesus.

"I started playing guitar my freshman year in high school. I grew up in the church, so I listened to a lot of Christian rock," he says. "When I got into eighth grade, I was exposed to the White Stripes and then Black Keys, secular music. I knew the guys from local band Ragged Jubilee from church and I started going to their concerts. When I saw King Walrus for the first time, I was exposed to this underground scene and it was amazing. Here was this band from SLO always playing with these cool touring bands from LA."

Those two local bluesy rock bands, plus the exposure to outside sounds, opened up a vortex of new music for Wildey. Next came a wave of modern garage rock from smaller indie labels as well as vintage garage rock, surf rock, and psychedelic music.

When I ask Wildey about his very first band, he laughs.

"We had one show, at a high school dance, and it was terrible! We were called the Gnars. That's how I met Josh Price, still my best friend. He lives in Utah now and he's married and an 'adult,' but he's still in a band called Primitive Program, which is great. He is actually 'the wizard.'"

That's right, folks. There is a real wizard! And a real Pancho, too.

"'The Wizard' was a nickname we gave Josh because he shreds at everything he does. We wrote a bunch of songs together, recorded a tape in 2015 called Pancho and the Mucho Wizard Jam Band. My name at my old work, at Rooster Creek Tavern, was Pancho. The kitchen staff gave it to me," Wildey explains.

Note: You can listen to those early, fuzzed-out recordings on bandcamp.com, too. Get ready for a lot of bluesy bass lines, reverby guitar, distorted vocals, and intentional feedback. But you can also hear a more elusive sound: It's the sound of pure joy, unselfconsciously put into the world.

"We want to be in the moment. Playing guitar and singing and doing music is literally my favorite thing to do," Wildey said. "Every time I play a show, the next day I'm thinking, "Man, I wish I could do that again!" 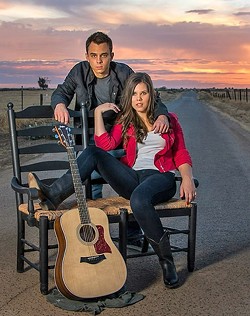 "We brought out guitars and quickly realized the talent each other had," Reed said in press materials.

Over the next year, they began writing original music and preparing to perform live. Brianna was a contestant on American Idol where she made it to Vegas week, which aired on Jan. 16 of last year. In early 2016, Aubrey Road cut their debut EP Red Light with Grammy nominated producer Brian Kolb. The EP would feature Rob McNelley on guitar. Aubrey Road also managed to stir the interest and support of Garth Brooks' lead player and Trisha Yearwood's manager Johnny Garcia, who continues to support their efforts. Aubrey Road has opened for The Band Perry, Cassadee Pope, and Michael Ray. Be sure to check out their song "Fender Bender," a twangy revenge song that's as hot as whiskey going straight down yer gullet. Music and more awaits at aubreyroadmusic.com.

On Dec. 22, put your ear to the ground and hear just what the Central Coast is singing and strumming at an open mic night hosted by local musician Noach Tangeras (7 to 10 p.m.). The night also features performer Akusaa Delorbe supplying all the holiday songs you know and love. On Dec. 27, stick around for Side Effects, an acoustic duo known for their classic Americana tunes (6:30 to 9:30 p.m.). Puffer's of Pismo is located at 781 Price St.

Hayley Thomas Cain is doing the Jingle Bell Rock, whatever that is. Contact her at hthomas@newtimesslo.com.