Nick Regalia knew he wanted to do something different for himself, and he knew that something would involve food. 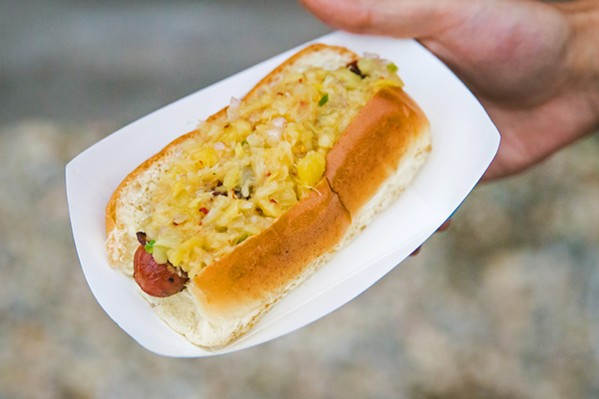 He wasn't so sure about the details, but in 2016 the San Luis Obispo resident—at the time in his late 20s and working at the Apple Farm Inn—did have a food cart that he'd picked up for $800 and a case of homemade wine.

"That cart kind of just fell in my lap," Regalia said.

Regalia also had a passion for street food. Having lived on the East Coast and spent time in places like Brooklyn as well as cities in Europe, the Italian-American was inspired by the vibrant street food culture at those places—where in one block you can find foods, flavors, and people from many different countries. He was curious to find out what living that life was like. 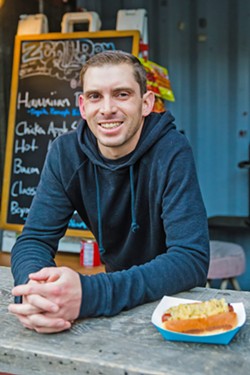 "That was the thing that got me into it," Regalia said of his travels. "Everything is more street food oriented. I really like that. ... I thought, let's take a shot at it."

Now, Regalia (and his food cart) is better known around SLO County as Zen Dog (@zen_dog805 on Instagram). You can find him slinging his tasty gourmet hot dogs and vegan dogs on weekend nights at McCarthy's Irish Pub in SLO 'til closing time and at various events and food truck gatherings around the county. Regalia said he believes he's the only street-style vendor currently working in downtown SLO at night, a gig he was afforded thanks to the pub's location on a street corner with a spacious patio and private parking lot, and his own scrappiness.

"SLO is really difficult to do business as far as [street food]," Regalia said. "You can't set up anywhere that's city owned, so that eliminates downtown. It's outdated, really."

Regalia started Zen Dog in the parking lot of Miner's Ace Hardware in SLO. The store graciously allowed Regalia to set up his food cart outside the cashier area, at no charge. There, he got the opportunity to learn the ropes of cooking street dogs, selling them to whichever patrons happened to be hungry for one.

"It was cool because I got to, for free, basically learn what the hell I was doing," Regalia said.

Hot dogs' speed and flexibility made them Regalia's food of choice. His most popular item is a bacon-wrapped Hawaiian dog, complete with a tequila pineapple relish, on a brioche bun. But he has other options, including classic dogs with a variety of topping choices, and even vegan dogs.

"I'm Italian, and I was always growing up around food and cooking and whatnot, so it's been cool to be able to create the menu; I'm always trying to keep it fresh, keep people guessing," Regalia said. "The hot dog works well with the crowd, and as far as grab and go."

As Regalia gained confidence behind the cart, he eyed McCarthy's as the golden destination. Several times he tried to reach out to the bar ownership, ASH Management, to make the pitch, but could never successfully make contact.

Still working his day job at Apple Farm, Regalia also moonlighted as an Uber driver. On one call during a particularly slow night, the McCarthy's Pub owner serendipitously stepped into Regalia's car for a ride home.

"I kind of gave them the elevator pitch," Regalia remembered with a laugh. "I was like, 'People leave downtown. There's not that many options late night.' I was trying to fill that gap and keep the patrons there. ... He was like, 'OK, let's try it out.'"

Since Regalia got established there, Zen Dog has built up a reputation and following on social media that's enabled Regalia to turn his side hustle into a full-time job.

"Everyone's been stoked," Regalia said. "It started taking off and paying for itself. I said, 'I gotta commit to this.' I just went for it."

Regalia now not only has ambitions to grow Zen Dog in the area (he recently bought a second food cart and a Santa Barbara County business license), but he hopes to help unify a growing local street food community.

"There weren't a lot of trucks down here when I started, but definitely in the last year I'm seeing more and more," Regalia said. "Now that this is my second and third year, you know the people, you start to build relationships. It's nice to see those doors kind of open. ... What I want to do is start a little coalition."

Part of his vision is to advocate for city policies that will allow street food to begin to really thrive on the Central Coast, like it does in so many places around the world.

If so, maybe Regalia won't be downtown's lone late-night street chef for long.

Assistant Editor Peter Johnson is cheering for street food in SLO. He can be reached at pjohnson@newtimesslo.com.