For Megan Souza and Eric Powers, opening the first dispensary in the city of San Luis Obispo has been a 10-year journey. From growing cannabis to operating a permitted delivery service and finally opening a storefront, Powers said he feels like it's a homecoming.

"This was kind of the idea since day one. After working with the local municipalities to make it happen, it's really great to finally realize the full potential of what we had always wanted to do," he said.

You would never guess that Megan's Organic Market at 280 Higuera St. is a dispensary. It seems more like a market. Cannabis-infused tea, mints, gummies, and chocolate, as well as marijuana bud, are on display on tables and shelves for customers to pick up and check out. With an open floor plan, the dispensary is different than the usual setup of having all of the products behind a counter. Souza said she was very firm about having a more open and inviting storefront for their customers. 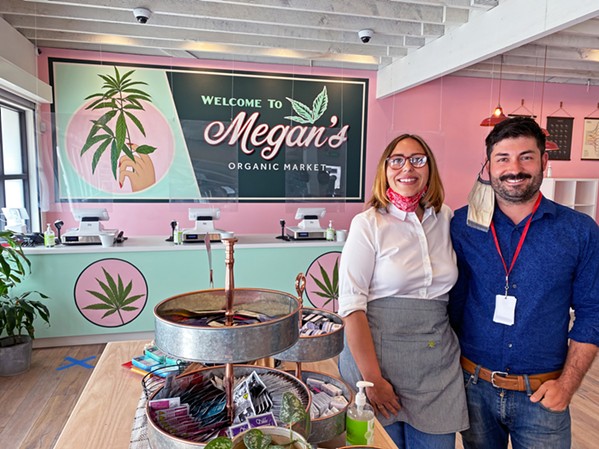 "It was a struggle to convince [the San Luis Obispo Police Department] and even my own business partner that this is the right model to pursue. But I feel like we are destigmatizing cannabis a lot with just this one feature, and we're destigmatizing by our wholesome aesthetic and our commitment to community benefit," Souza said.

One of Powers and Souza's goals with the storefront is to change society's idea about cannabis users and cannabis industry operators. They're hoping to join the movement in normalizing cannabis because Souza said they believe "cannabis is wholesome."

It's also a big responsibility for the pair to have the first legal storefront in the city.

"We're going to be so many people's first introduction to legal cannabis retail, and we want to do it right and show that it can be done better than it's been done elsewhere," she said.

Aside from state and federal regulations, the market also has local commitments to follow so it can stay in operation, including making local hires. All employees are SLO County residents, and 50 percent of the Megan's Organic Market team are city residents. The starting wage for market employees is 40 percent above the median income for similar positions in other industries within the county.

For now, the local business won't be continuing with its delivery operation but it will start offering curbside purchase and pickup for its customers.

During the recent public health crisis, Souza said they were elated that the state deemed cannabis retail as an essential business. Similar to other businesses, Powers and Souza implemented policies to keep their employees and customers safe—such as cleaning all the touch-point areas in the store every hour.

Megan's Organic Market has been a labor of love for Powers and Souza that started with Powers growing cannabis for Souza. They jokingly told New Times they were saving money for an adventurous trip to Panama, but then they learned they couldn't get a business loan for a cannabis business. So they scrapped the idea and worked double shifts to make Megan's Organic Market a reality. To learn more about the storefront, visit megansslo.com or call (805) 592-1420.

• The SLO County Behavioral Health Department in partnership with the county's Suicide Prevention Council is looking for input through a survey as they shape the future of local suicide prevention efforts. The council hopes its new survey and responses will paint a clear picture of the county's needs and assist in creating a unique prevention plan for county residents. The anonymous 10-minute survey asks participants to share their personal thoughts, experiences, and knowledge about suicide. The online survey is open to all residents through Sept. 30. Visit slobehavioralhealth.org for surveys in both English and Spanish. For more information, contact Alysia Hendry at (805) 781-1357 or aahendry@co.slo.ca.us. If you or someone you know is struggling with suicide, call the National Suicide Prevention Lifeline at (800) 273-8255. Δ