Mellow Banana strikes the perfect balance between delicious and health-conscious

It's rare that someone's childhood career ambitions become their reality as an adult, but SLO County local Chantal King experienced just that when she and her partner, James Clayton, opened Mellow Banana Smoothie Shop on April 1.

"I've wanted to open a smoothie shop for over 10 years," King said. "It was a dream I had when I was in middle school. I just love smoothies, fresh fruit, everything like that. And I was really into eating healthy."

With her interest in health and food science in mind, King studied to become a physician assistant.

"I saw the huge connect between diet and lifestyle and how that impacts health," King said. "And I was like, if we could just get people to eat healthier and make it simple, maybe this would help prevent a lot of health issues down the road."

King decided to combine her dream to open a smoothie shop with her passion for promoting a tasty and accessible healthy diet, and Mellow Banana was born.

"Every smoothie we make has a specific purpose, or is geared toward something: energy, or anti-inflammatory, or good for your stomach, that type of thing," King said. "A lot of people like the Salvation Mountain, which is a protein smoothie that has granola and a cinnamon flavor. Then our Super Greens is like your classic green smoothie, but on steroids: It has a lot of good, healthy fats in it from hemp seeds, flax seeds, coconut oil."

Including healthy proteins in smoothies is key. If a smoothie has just fruit and juice in it, King explained, the sugar will convert straight to glucose in your body and spike your blood sugar. But if you add some coconut oil, almond butter, protein powder, or another protein source, King said, the sugar enters the bloodstream slower, resulting in longer, more sustained energy.

"We use frozen fruit, that's the basis of our sugar, and then we use an organic Greek yogurt," King said. "Adding in just a simple Greek yogurt, the protein balances the sugar of the fruit. That was really important to me, to make it fully balanced."

I tried the Heart Beet smoothie—one of the few Mellow Banana menu items that don't actually involve bananas—because King told me it tastes just like chocolate-covered strawberries, which sounded like my ideal smoothie situation. And that was exactly what it tasted like. As the name suggests, the Heart Beet smoothie also had beet powder in it, adding a nutritional component that didn't impact the delicious taste at all.

If you want to go for the namesake, try the Mellow Banana smoothie, loaded with banana, blueberries, leafy greens, hemp seeds, peanut butter, yogurt, and cinnamon. If a beverage isn't what you're craving, Mellow Banana also offers açai bowls and waffles—plus lots of topping options that you might not find in your typical smoothie shop, like hemp hearts, ginger, reishi (a type of mushroom with all sorts of health benefits), ashwagandha (a medicinal herb), and turmeric, to name a few. 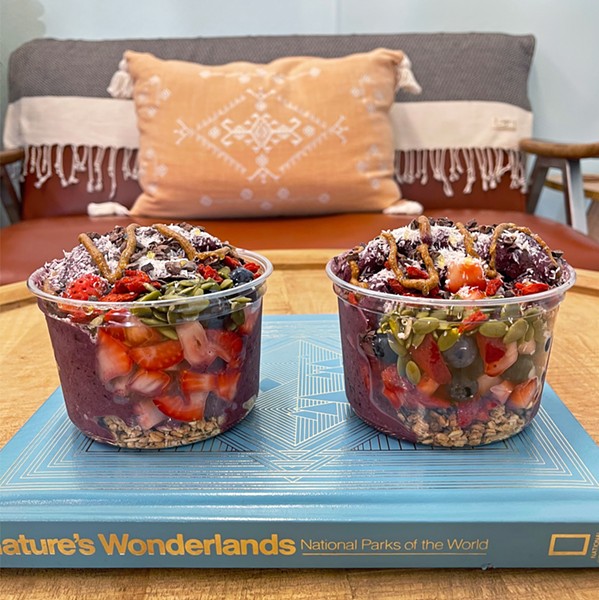 "We also offer paleo and vegan waffles," King said. "Then we have coffee: We connected with Spearhead Coffee in Paso. We wanted it to be like, if you're here late in the afternoon, you can have a waffle and some coffee."

The cozy lounge chairs, twinkly lights, and beachy decor inside Mellow Banana make for a perfect atmosphere to kick back and soak in the good vibes, whether you're grabbing a morning smoothie or an afternoon waffle. Owners King and Clayton envision Mellow Banana as a place where the community can gather and enjoy some healthy eats, minus all the exclusivity and intimidation that often come with health food spaces.

"Even though smoothies are a to-go item, we really want this place to be a space where people can hang out and meet and connect," King said. "Our goal is to really make it accessible to young and old, and not just serve one specific group. We're trying to welcome all people, whether you're already eating healthy or not, this can be a place where you can come and feel welcome. We want to take away that stigma."

"Eventually we want to do hiking groups once a month, surfing groups, whatever people are interested in, and get people from the community to be leaders," King said.

That community component is integral to Mellow Banana's mission to give people healthier lifestyles.

"As I was studying medicine ... the biggest issue I saw a lot of people have is making changes that lasted," King said. "A huge thing that influences that is community. If someone goes into a healthy community and has other people around them—that's what makes it stick." Δ

Staff Writer Malea Martin will take another Heart Beet smoothie to go. Reach her at mmartin@newtimesslo.com.