Last I checked, Bone Thugs N Harmony was reunited and complete, with Bizzy, Wish, Layzie, Krayzie, and Flesh-N-Bone all returned to a group that MTV called "the most melodic hip-hop group of all time" and that About.com ranked 12th on its list of The Best Rap Groups of All Time. 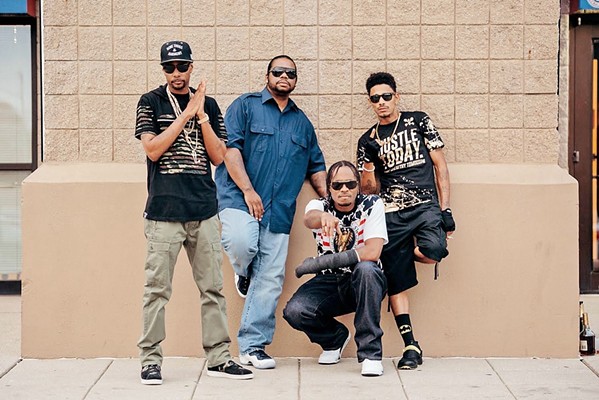 The Grammy Award winners—they won in 1997 for their track "The Crossroads," a tribute to the then-recently deceased Easy-E—haven't released a new album for a couple years, and their 10th, 2017's New Waves, only featured two members, Krayzie and Bizzy Bone.

I'm guessing when they play the Fremont Theater this Sunday, Dec. 22 (doors at 8 p.m.; all ages; $43.73 at Boo Boo's and eventbrite.com), they'll be reaching into their catalog. In any case, their sound is still as smooth as butter but punctuated with staccato raps. Think of them as an R&B vocal group that can also lay down some slick rhymes!

Bad Santa in the house!

Numbskull and Good Medicine Presents are bringing Moonshiner Collective to Morro Bay's The Siren this Friday, Dec. 20, for a Bad Santa Party (7:30 p.m.; 21-and-older; $10 presale at Boo Boo's and eventbrite.com, or $12 at the door), with Silk Ocean opening.

Moonshiner Collective is fronted by multi-instrumentalist singer-songwriter Dan Curcio, who pens very hooky tunes in the folk, rock, and Americana genres. Ben Harper is often my touchstone when trying to describe his sound, which can change depending upon the revolving collection of excellent musicians he surrounds himself with.

"So the Bad Santa Party is just an excuse to get a little festive with the local community and bust out some holiday songs with our own spin on them along with our originals and covers," Curcio explained. "We love how the holidays bring out the joy and nostalgia in us, and [we] just wanted a night where our local community can have a good time together with it. We're gonna have an ugly sweater contest, holiday cocktail specials, and all the good tidings/cheer you can handle. We just released a cover of Chuck Berry's "Run Rudolph Run" on Krush 92.5 as well as Spotify, Apple Music, and all major streaming sites if anyone wants a glimpse of what the Christmas songs will be like on Friday." 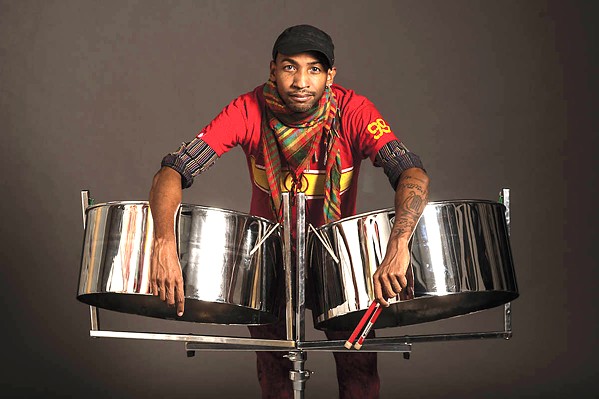 Also at The Siren this week, get things started on Thursday, Dec. 19, with the Jonathan Scales Fourchestra (doors at 7 p.m.; show at 8 p.m.; 21-and-older; free). Scales is an amazing steel pan artist. His latest album, Pillar, climbed to No. 5 on the iTunes Jazz Chart; he was selected by the U.S. Department of State as a cultural ambassador, with tours in Asia and Africa; he's a TEDx speaker; and he's a three-time special guest performer at Victor Wooten's prestigious music camps.

Scales is a true virtuoso on the steel pan, an innovator who's redefining the limitations of the instrument that was invented in around 1880 in Trinidad and Tobago and made out of 55-gallon steel drums used to store chemicals.

"In his hands, the sonic palette of an instrument often associated with cruise ships and tropical resorts is radically expanded to mimic the role of horns, piano, vibraphone, or marimba due to his stunning, virtuosic technique," press materials read.

The quartet features Marshall Otwell on piano, Jeff Miley on guitar, Ken Hustad on bass, and Darrell Voss on drums. Swearingen will add her warm, lustrous voice to the proceedings.

Money raised will benefit Restorative Partners, a nonprofit organization "whose mission is to transform lives impacted by crime through healing services and relationships."

This Sunday, Dec. 22, the Songwriters at Play showcase is bringing Sacramento singer-songwriter Jenn Rogar to Sculpterra Winery (1 to 4 p.m.; all ages; pass-the-hat).

According to organizers, "Rogar is a rabble-rouser, a folk singer in the tradition of Holly Near and Joan Baez, [who uses] her music as a tool to educate and incite pacifism and activism and awareness. Her music is also intended to invite sentimentality along the lines of Kate Wolf and Janis Ian."

Special guests include Mike Scully and Craig Louis Dingman, and these showcases generally include one featured act surrounded by several other singer-songwriters playing four-song sets. Δ