Steel Magnolias will be onstage at the Great American Melodrama through March 10. Tickets range from $23 to $30. Visit americanmelodrama.com for more information.

But you know what, y'all? It's 2019, and election time is just a mere 21 months away. So extend some benevolence to your nearest bro and take them out for a heart- and mind-changing night of theater to see Steel Magnolias (followed by a vaudeville revue celebrating women in comedy) at the Great American Melodrama. 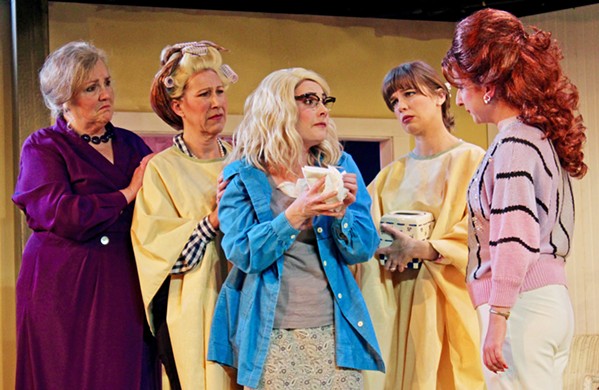 The show, popularized by the 1989 movie adaptation featuring Dolly Parton and Julia Roberts, celebrates its 30th anniversary this year. It also marks the first time that an all-female cast takes the Melodrama stage.

So sit yourself down with some of the Melodrama's insanely good chocolate cake and prepare for a night of laughing through the tears. Steel Magnolias made its stage debut in 1987, and playwright Robert Harling (First Wives Club, Laws of Attraction) based it on his own family tragedy, so there are tough times ahead in this story. It's Annelle's first day on the job, and it's a busy one at the salon with Shelby getting her hair done for her wedding day. Clairee and Ouiser stop by for their regular appointments, too. The fun, witty banter between old and new friends comes to an abrupt halt when Shelby, a diabetic, goes into insulin shock.

Later it's revealed that although Shelby and her husband are in love, because of her myriad health problems, doctors have urged her to not have children. Steel Magnolias deals in heavy, light, and everything in between, and the ladies onstage adeptly roll with the emotional curveballs the story throws their way.

Worley-Beck as Annelle is in turns quirky, endearing, and vulnerable. Moore as Truvy embodies the hairdresser that you immediately spill your guts to before a single hair hits the floor. Church's Ouiser is the gruff yet lovable elderly bachelorette. Thayer as Clairee is quick-witted and warm. And Newman and Tucker capture the eternal push and pull between mother and daughter as only two strong women who refuse to give an inch can.

And just when the feels have been clean knocked out of you and you think it's time to go—BAM!—it's bonus show time. Every Melodrama production includes a vaudeville revue, and Steel Magnolias is no exception. This revue delights audiences with a skit about group therapy for wannabe Disney princesses, comedic sketches honoring greats like Gilda Radner, and musical tributes to Carole King. Although there are no men in this show, as the ladies of Steel Magnolias sing in their parody of Beyoncé's "Single Ladies": "Don't worry 'cause the ladies got a handle on it." Δ

Arts Writer Ryah Cooley adores funny women, including but not limited to Tina Fey, Amy Poehler, and Amy Sherman-Palladino. Contact her at rcooley@newtimesslo.com.