How the West Was Really Won shows on alternating nights with Poppa Pia! through Sept. 22. Tickets range from $23 to $30. Each show includes two intermissions and a vaudeville review. Visit americanmelodrama.com for tickets and more information.

Once upon a time, the Central Coast—and all of California, really—was a lawless wasteland. But not as much of a lawless wasteland as say, Arizona, if the Great American Melodrama's hilarious farcical play, How the West Was Really Won, is anything to go off of.

In a series of short stories that poke fun at theatrical and storytelling tropes, How the West Was Really Won fleshes out the world of Dead Water, Arizona, a chaotic place with water that will kill you, where even the horses drink whiskey. 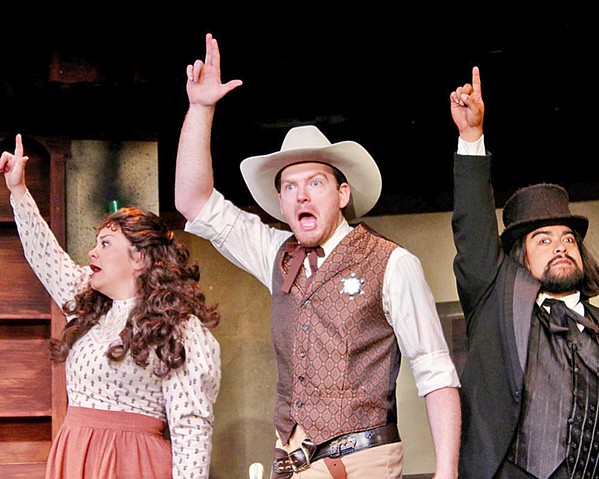 Enter our brave sheriff (Mike Fiore), who is constantly going head to head with evil outlaw Snake (Ben Abbott) and his lady love, Mustang Sally (Katie Pautler). Snake is so dastardly that he kills Card Player No. 1 (Rachel Tietz) for refusing to give him 3s she didn't have in a rousing game of Go Fish. As the sheriff cautions earlier in the show, "Bad things can happen to minor characters without real names."

Upon thumbing its nose at one storytelling trope, the show promptly winks at another as Snake brings an audience member onstage to replace Card Player No. 1, all while saying, "This is called the fourth wall that you're breaking." You can guess how well that second round of cards goes.

And a Judge Judy-themed trial only further tips its hat as it acknowledges the comical necessity of multiple actors playing multiple parts when Tietz (formerly Card Player No. 1) must execute justice at the trial over her own character's murder. 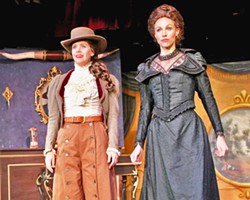 With that first storyline's resolution, all is quiet in Dead Water, but only for a mere moment as Johnson (Tietz) and Johnson (Pautler)—the railroad tycoon and cattle baron, respectively, before they got in the business of baby powder and such—scheme up ways to get widows and small children off the ample land so they can build a railroad and graze cattle. However, their inept henchmen (Abbott and Henry Fisher) fail them time and time again, in progressively sillier ways, resulting in Abbott's playing the femme fatale in a dress as he attempts to seduce and poison the sheriff. Oh my!

But fear not, dear audience member, there are plenty of bad guys to boo and hiss at in How the West Was Really Won, and there's also a love story or two (gasp!). Plus, I'm not naming names, but we even see one beloved minor character narrowly escape death and get a real, proper name!

How the West Was Really Won is simply too joyfully silly to be actually scary, but if all that talk of ne'er-do-well villains puts you on edge, there's always the Family Fun Vaudeville Review after the second intermission to cheer you up, pardner. Δ

Arts Writer Ryah Cooley is writing off into the sunset on her trusty steed. Contact her at rcooley@newtimesslo.com.