Treasure Island and the Soda Shop Jukebox Vaudeville Review will show at the Great American Melodrama in Oceano through June 16. Tickets range from $23 to $30. Visit americanmelodrama.com for more information.

You're minding your own business, running an inn with no customers, when an about-to-be-dead pirate runs in, gives you a treasure map to hide, swears you to secrecy, and then has the nerve to get captured by his own men.

It's a wild goose chase from start to finish, but the Great American Melodrama's quirky (and very loose) adaptation of author Robert Louis Stevenson's classic novel, Treasure Island (followed by the Soda Shop Jukebox Vaudeville Review), will have audiences in stitches from beginning to end.

When a stolen treasure map falls into the hands of young Jim Hawkins (Mia Mekjian, Less Miserable), he and his friend, Jenny Smith (Bailey Leyvas, a Melodrama alumni since her child acting days), become the pirates' next prey. Further complicating matters is the fact that Jim's long-dead father used to be a man of the high seas and he's not sure which pirates—including the cunning Long John Silver (Mike Fiore, Unnecessary Farce)—are friend or foe.

Jim sets out on a chartered ship to search for the treasure, along with Jenny and their rich backer and wannabe captain, Young Squire Trelawny (Ben Abbott, Unnecessary Farce), only to find Long John Silver is just as eager to get his hands on the gold.

Treasure Island, set in the year 1757, takes audiences to the port of Bristol, the high seas aboard the good ship Hispaniola, and finally to Skeleton Island itself. The tale is familiar, but the comedic twists and turns are brand new, including a parody spin on Justin Timberlake's "Sexy Back," in which Fiore as Long John Silver sings, "I'm bringing booty back."

Mekjian as Hawkins is plucky yet naive, until he wises up to what his smart, discerning friend, Jenny, has seen all along: Pirates just want the treasure for themselves. There are moments of on-the-nose humor, such as when Abbott as Young Squire Trelawny proclaims, "What are rich sons for?" as he blindly agrees to fund their quest for treasure.

Alejandro Guiterrez puts on a dress to become Mrs. Bluveridge, the innkeeper, who serves as the audience's direct narrator, hilariously chirping things like, "They're pirates!" in a high-pitched voice while anxiously skipping off stage. 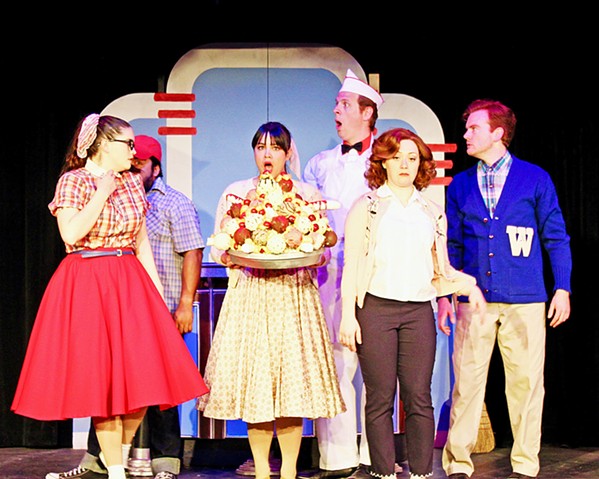 And even after the hunt for treasure is over, audiences will bliss out to the charming 1950s style Soda Shop Jukebox Vaudeville Review, complete with poodle skirts and promises to only go to the big dance if everyone has a date. If there's one show to take the whole family to this season, it's the Great American Melodrama's Treasure Island. Δ

Arts Writer Ryah Cooley is a fan of all that glitters. Contact her at rcooley@newtimesslo.com.