Men camp, solve all the world's problems, and then wake up in the rain

It’s Saturday, Jan. 30, and I’m eating a chicken waffle at Southern Station in Santa Margarita. It’s my first and it’s just like it sounds: a waffle with a big pat of butter under a deep fried chicken breast, which I’ve covered in maple syrup. Yes, it’s freakin’ awesome. 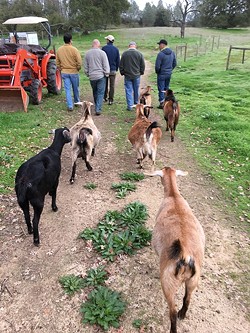 I’m with five buddies, and we’re all making bad decisions—chicken fried steak, biscuits and gravy, bacon and sausage. It’s the beginning of another M.O.F.E., which stands for Men’s Opportunity For Excess—a campout with lots of rich food, booze, and manliness.

Do you remember Iron John: A Book About Men by American poet Robert Bly, which was published in 1990? The title is taken from a Brothers Grimm parable about a boy developing into adulthood under the guidance of a wild man. Bly’s book is considered a pioneering work in the mythopoetic men’s movement, which according to Wikipedia “grew as a reaction to the second-wave feminist movement and aims to liberate men from the constraints of the modern world, which keep them from being in touch with their true masculine nature.”

Men need to be men, see?

This is serious stuff, and we’re obviously carrying on an important tradition of men reclaiming their manhood. Well, that or maybe our M.O.F.E. group is just an excuse to eat, drink, and do all the stuff our wives or girlfriends don’t especially want us to do, so we’re having a rich breakfast and then we’re going to another friend’s 10-acre Santa Margarita spread for a one-night campout. Somehow, despite the brevity of our excursion, the entire back of my full-size pickup is full of stuff. 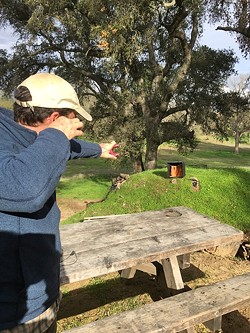 It’s been raining this morning, so our proposed hike along the Riconada Trail near Pozo has been scrapped in favor of heading to our friend’s goat and chicken farm to set up our camp and drink adult beverages because it’s almost noon, and this is a M.O.F.E. after all.

We all love women, but sometimes we need to hang out with men and solve all the world’s problems with our conversations, because when women are around, it turns out that our brilliant ideas aren’t that great. 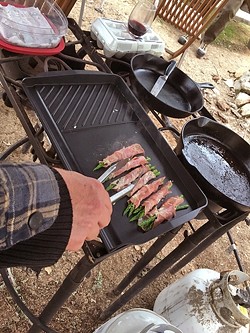 It’s a beautiful day and we set up a couple pop-ups to cook under in case the rain returns (Spoiler alert: It does!). Then we spend the day eating and drinking and talking and laughing, and then it gets dark and we start a fire and we drink and talk and laugh some more. I can’t remember everything we talk about (Thank you, mind-erasing whiskey!), but it’s pretty clear that if we were in charge, the world would be a much better place.

When we wake up, it’s pouring rain. Rivulets of water are etching ruts in the ground around us, but we’re men, so we put on rain suits and we cook breakfast. We’re not idiots, however, so we soon retreat to the yurt on the property and get the potbelly stove going, and we discuss the engineering behind a thermoelectric stove fan and we think about breaking down camp and we wonder if the rain will let up, and then one of the pop-ups—despite being staked to the ground—flies away and our manhood once again is required.

My back is killing me from sleeping in the back of my truck, but we pack up in the pouring rain, thank our host, say goodbye to the goats, and drive back to reality, where the world’s problems are pretty much unsolvable, but our wives and girlfriends remind us that life’s pretty good, especially when a hot shower is available. 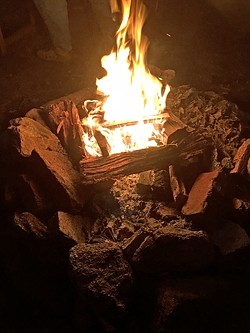