SLO County has a cat problem.

Stray and feral cat populations have exploded in recent years, most alarmingly in North County, where “community cats” are overwhelming animal shelters, multiplying faster than they can be neutered, and putting a strain on the availability of both natural and human resources. 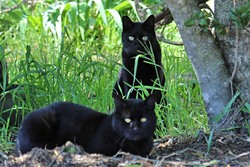 According to SLO County Animal Services data, more stray animals originate from Paso Robles and Atascadero than from SLO’s five other cities combined (even with 37 percent fewer residents).

North County’s unincorporated land is also a big source of stray animals: from 2010 to 2012, 45.5 percent of all the animals taken to the county shelter were found in unincorporated parts of the county.

“We get a disproportionate intake of community and feral cats from the North County area,” said Eric Anderson, director of SLO County Animal Services, the first stop for lost animals in the county. “They wind up being a real challenge for us to manage.”

North County is a hotspot for cat breeding thanks to the open, rural land; a reluctance on behalf of residents to claim ownership of cats and shoulder their vet bills; and the absence of an affordable spay and neuter clinic in the area.

“A large percentage of cats that are out there probably don’t have a person that truly identifies themselves as the owner of that cat, even though they might sleep on somebody’s porch, even though they might have somebody putting food out for it,” Anderson said. “Because nobody really thinks of themselves as the owners of those animals, nobody takes it to provide it with basic veterinary care, and to get them spayed or neutered.”

Jill Tucker, executive director for Woods Humane Society, told New Times that if cats in a particular area aren’t getting altered, it doesn’t take long for their numbers to increase exponentially.

“Cats, their breeding cycles are pretty quick. They can have two litters a year,” Tucker said. “That can get out of hand in a rural area because there’s more space so you might not notice there’s a problem until there’s a lot of cats.”

Tucker noted that the cats owned and cared for in North County are often unneutered, especially on larger, rural properties, thus those populations can get out of control quickly. Now, a handful of organizations are scrambling to curb the cat population.

Paws Cause, an organization based in North County, specializes in the “trap, neuter, and release” practice. Paws Cause first identifies where cat colonies are thriving—from Bradley to Shandon to Santa Margarita—with the help of the public. Then, they trap the feral cats, get them spayed or neutered, then release them back where they originated.

It took a long time for that practice to become the norm. Prior, the approach to stray cats in the county was the same as the one used more successfully with dogs: Socialize the animal and get it adopted. That approach proved to be unsuccessful because many feral cats don’t adjust well to domestication, which resulted in low adoption numbers, a spike in euthanasia rates, and it did nothing to solve the population issue.

Laura Hughes, director at Paws Cause, called it the “vacuum effect.” New cats moved into recently cleared areas and reproduced. Trap, neuter, and release has proven to be more effective in limiting population growth.

North County Humane Society takes a different approach, trapping cat litters and raising the kittens at its shelter in Atascadero. The city of Atascadero allots some money to the organization, which helps pay for the $25 spay/neuter vouchers offered to people interested in getting a community cat (or two, or three) fixed.

“Each one of us is trying to do something,” said Sherry Chapman, North County Humane Society shelter manager. “We’re making progress. It’s better than it was.”

Even with those efforts, organization leaders say that the long-term solution will simply require more resources and involvement. North County is missing a low-cost spay and neuter clinic, which would assist more people in getting their community cats spayed or altered.

Woods Humane Society is currently seeking to fill that need. Tucker said the organization is talking with SLO County about the possibility of leasing a plot of county-owned land in Templeton, with the ultimate intention of building a spay/neuter clinic and shelter there to serve the area.

“There’s a lot of reasons why that site might be good,” Tucker said. “It’s accessible to the freeway and it’s centrally located between Atascadero and Paso Robles. We think it’d be really easy for everyone to get to. If we get the go-ahead, it’s our intention to secure a lease on it and move forward on it very quickly.”

Anderson, director of SLO County Animal Services, believes the addition would be a critical piece of the long-term cat solution.

“There are a lot people out in the community who are providing some basic care for cats, and if they can get that cat in and get it spayed for free or for $5, then they’d do it,” Anderson said. “The hope is that by getting affordable spay and neuter programs going in the area, we can begin to get those populations under a little more control.”

Meow at Staff Writer Peter Johnson at pjohnson@newtimesslo.com or on Twitter at @pljohnson9.