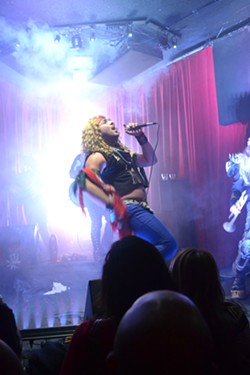 It’s Thursday, Dec. 20 at 9:21 p.m. when I meander into SLO Brew to the heady sounds of Metalachi, a group with the distinction of being the first heavy metal mariachi band. After wrapping up a Led Zeppelin cover, the band gives a lengthy shout-out to all the cholas and “reformed cholas” in the audience.

“San Luis Obispo, how the fuck are you feeling tonight?” hollers singer Vegas de la Rockha. San Luis Obispo responds with a few woo-hoos before heading to the bar for another beer.

I can’t quite get a read on Metalachi’s audience. There’s no clear “type” out in force tonight, just a lot of people in town over the holidays and looking for something to do; perhaps curious as to what something billed as “heavy metal mariachi” would be like. (It’s weird. That’s the extent of my music-writing abilities. Where’s Glen Starkey when you need him?)

I’m flanked by my boyfriend—who pleads that his name not be used—as well as New Times Staff Writer Rhys Heyden, and lo!—There’s New Times News Editor Matt Fountain, who materializes from the crowd to let us know we’re all goddamn fools for not standing up front, where all the titties are! It’s my first heavy metal mariachi show, so I guess I’m not totally aware of the titty protocol. What a noob!

As Rhys is dragged against his will to the alleged titty area, the band calls for a “volunteer” to help them make their introductions, selecting an attractive (in retrospect perhaps overly trusting) blond woman named Tina. De la Rockha gives Tina an empty glass, and proceeds to introduce his bandmates as each of them pours something sketchy into it. Thus, we meet gitarron player Pancho Rockafeller, trumpet player and clear Alice Cooper admirer El Cucuy, Roman Holiday (get it?) on guitar, and Maximilian “Dirty” Sanchez on the electric violin. (Legend has it they’re all brothers, miraculously carried to the United States from Mexico as babies on the back of a burro.) De la Rockha concludes with a phallocentric piéce de résistance that my boyfriend and I are both too short to actually see, but which the comparatively taller Rhys lets us know involves Tina, a codpiece, and a lime. (Later, while writing, I will text him for clarification: “Hey, could you describe the codpiece/lime juice mechanics for my Art Bash? I was too short.” His descriptive reply: “They made Tina go down on her knees, and the dude with the codpiece squirted two lime quarters down a channel in his codpiece. His pelvic thrusts propelled the liquid into the glass.” After a pause: “Ugh, now my thumbs feel so unclean.” So there you have it, reader, straight from the horse’s codpiece.) 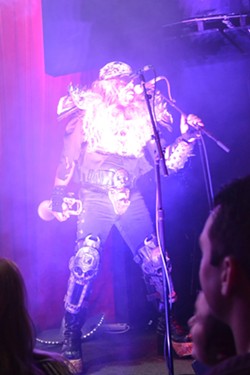 After getting fake peed on by a man wearing a light-up sombrero and a crop-top, Tina is permitted to stand up, but not to leave until the drink—turns out it’s a margarita—is gone. “Chug! Chug! Chug!” cries the crowd, spurred on by de la Rockha, as Tina gamely glugs her way through the enormous and possibly undesired beverage.

“But we roofie ourselves before every show, so we’re equal-opportunity roofers,” he reassures her.

Thus introduced, Metalachi launches into “Livin’ On a Prayer,” transitioning cleverly into “La Bamba.” After some witty banter concerning chi chis, and cholas wearing lip-liner on their vaginas, delivered in exaggeratedly nasal Mexican accents, they launch into Sublime’s “Santeria,” which Maximilian “Dirty” Sanchez spins into a shreddy electric violin breakdown at the end.

After an homage to Metallica, de la—I can’t believe I have to type this ridiculous name so many times—Rockha begins scouring the audience for another volunteer. The winner is Susie, a blonde in glasses, a sweater, and a mini-skirt. (“Sexy Susie!” the band croons nasally.) Susie’s job is to spread her legs while being serenaded and ground upon by each Metalachi member in turn.

“I feel really bad for that girl,” Rhys confides, after at least 10 minutes has gone by.

My boyfriend wants to know if we can go now. I nod, and put on the coats I have been awkwardly carrying under my arm, while trying awkwardly to take notes.

I’d come out of curiosity, and because there is frankly nothing happening the weekend before Christmas. But in seeking to meld two cultures, Metalachi seems only to have extracted their worst stereotypes, turning women into punchlines and portraying both metal-heads and Mexicans alike as sleazy and gross. Sure, it’s sort of funny, in a queasy sort of way. (And yes, I’ve seen Spinal Tap.) But it’s also deeply problematic. And either way, I’m done. I’m too sober—no; I’m too smart for this shit!