Metalachi brings its metal and mariachi sounds to SLO Brew on March 12!

The horn, the strings, the sombreros—all the magic awaits on Thursday, March 12, when Metalachi returns to SLO Brew (8 p.m.; all ages; $12 presale or $13 at the door).

The quintet of classically trained mariachi musician brothers now calls Hollywood home, but they purportedly hail from Juarez, Mexico, and they deliver a musical/comedy stage show that’s like the virgin birth lovechild of Cheech & Chong meets Spinal Tap … with the three wise men—KISS, Gwar, and Rob Zombie—looking on and giving their blessing.

“On a hot summer night in Veracruz, Mexico, circa 1982, Consuela Espinoza stumbled out of her dilapidated shanty and into rock ’n’ roll history,” reads the band’s bio. “What began as an innocent night of snorting horse tranquilizers in a hotel room with seven members of the village jai alai team went on to produce the greatest metal band to ever live. Unhampered by a steady regime of tequila and ill-advised sumo lessons, nine months later five bastard children where born. Unable to care for her hungry offspring and concerned that motherhood would seriously interfere with her Tuesday night Karaoke league, Consuela hastily packed the babies into the saddlebags of a burro and sent her children off to America in search of a better life. Against all odds, 14 years later, and nearly dead from dehydration, the burro knelt down to drink from the stagnant waters of the Rio Grande just outside of Juarez, Mexico—mere yards from the U.S. border. With one fleeting burst of energy, the brothers Espinoza cinco climbed from their leather restraints and scampered the vast reach of the river, collapsing onto the sweet amber hue of American soil. As if by destiny, lodged in the sand beneath their tanned faces was a record sleeve upon which were the words “PARANOID” and “BLACK SABBATH.” For many years to follow, this definitive black metal album served not only as a teacher and a mentor … but also as a friend. From these bleak and humble beginnings grew the seed that would eventually be the band we know today. Often referred to as the greatest heavy metal band to ever live … always referred to as … METALACHI!”

But that’s not all! Also at SLO Brew this week is the return of High Voltage—A Tribute to AC/DC on Saturday, March 14 (7:30 p.m.; 21-and-older; $10 presale or $11 at the door). Who doesn’t love AC/DC? You? You don’t love AC/DC? Shame on you! Stop reading and go sit in the corner. The rest of you head to SLO Brew and hear all the classics like “Highway to Hell,” “Thunderstruck,” “Sin City,” “You Shook Me All Night Long,” “Problem Child,” “Dirty Deeds Done Dirt Cheap,” “For Those About to Rock (We Salute You),” “Let There Be Rock,” and “Back in Black.” These guys deliver!

On Sunday, March 15, see bluegrass expansionists The Infamous Stringdusters (8 p.m.; all ages; $15 presale or $17 at the door), whose acoustic rootsy string music moves way beyond your granddad’s bluegrass. The title track of their fifth album Let It Go pretty much sums up their ethos: “If it’s worry you’ve been feeling over things you can’t control, it’s time to let it go.” Check out Andy Hall (dobro), Andy Falco (guitar), Chris Pandolfi (banjo), Jeremy Garrett (fiddle), and Travis Book (upright bass) in their exhilarating and unpredictable live show.

Despite about a thousand Cal Poly students jumping the St. Paddy’s Day gun and collapsing a roof last week while partying (I guess all the architectural engineering students were studying that morning), saner Saint Patrick’s Day festivities will prevail!

Meanwhile, the Painted Sky Concert series presents a special Irish and Celtic music concert with Paddy Keenan and Padraic Conroy this Tuesday, March 17, at 8 p.m. “This Man is the real deal,” said concert host Steve Crimmel, “There’s nothing quite like sitting in a room and hearing uilleann pipes being played live. Recordings can’t even come close to capturing the magic of their sound. Generally acknowledged as the most accomplished uilleann piper performing today, and a recipient of The Irish Music Association’s Lifetime achievement Award, Paddy is certainly one of the most brilliant musicians of his generation. He can rightfully claim his place alongside such open-style legends as pipers John Cash and Johnny Doran. Paddy’s accompanist will be singer-guitarist Padraic Conroy, who hails from the town of Athlone in Co Westmeath, Ireland.” Tickets are $20 at Cambria Music Box Shoppe, Boo Boo Records, or at 927-8330. 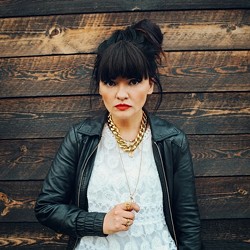 Scottish folk-pop singer Natalie Clark performs live at Frog & Peach on Thursday, March 12 (at 7:30 p.m.), and at Creeky Tiki on Friday and Saturday, March 13 and 14 (at 8 p.m.). “After recently giving up her teaching career in the U.K. to pursue her dream of writing and playing music, the rising soul-pop artist made headlines in the U.K. when Virgin impresario Richard Branson invited her to sing on-stage at a BBC Radio 1 Academy session in Glasgow,” according to her bio. “Clark accepted his impromptu challenge, and sang ‘Weakness,’ from her debut EP. It prompted Branson to proclaim: ‘That was absolutely and utterly stunning—no backing band, no musicians, no forewarning.’ He later called her ‘inspiring.’” I watched some videos online, and she’s really got a beautiful style and a big heart. Check her out!

Cal Poly’s University Jazz Bands will perform their Just Jazz concert this Friday, March 13, in the Spanos Theatre (8 p.m.; all ages; $12 or $9 for students at 756-4849). “An important part of jazz for any musician is staying true to its tradition and expanding its boundaries,” said Paul Rinzler, director of jazz studies at Cal Poly. “The element of surprise is always present, because jazz is improvised.” The concert features the university’s best student jazz musicians in two big bands and two jazz combos.

This Saturday, March 14, Unfinished Business and four special guests will present A Rock and Roll Fantasy Adventure at 7 p.m. in the Pismo Vets Hall. “Does The Byrds’ song ‘So You Want To Be Rock and Roll Star’ relate in any way to your personal bucket list?” asked the band. “Well, the answer was ‘yes’ for four local musicians who will be performing on stage before a live audience with Unfinished Business. The ‘adventurers’ who will be rehearsing for this show and then performing with Unfinished Business are Marty Black, a Pismo Beach drummer and singer, Greg Braun, a guitarist residing in Nipomo, Bo Pearsall of Paso Robles on guitar and vocals, and Kevin Beauchamp of Nipomo on guitar.” Tickets are $10 at Boo Boo Records, brownpapertickets.com, or at the door (provided it doesn’t sell out). 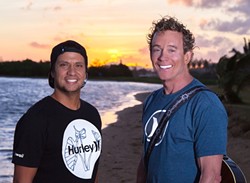 Take a trip to Hawaii without leaving town this Saturday, March 14, when one of the island’s hottest groups, Hapa, plays Cal Poly’s Spanos Theatre (8 p.m.; all ages; $36 to $45 at 756-4849). Featuring Hawaiian guitarist Barry Flanagan and lead singer Kapono Nā‘ili‘ili, the duo’s music was declared “majestic, stunning, [and] reflecting a link to the past while soaring mightily into the future,” by the Honolulu Advertiser. There music “is an amalgam of influences ranging from ancient Polynesian rhythms and genealogical chants to the strummed ballads of Portuguese fisherman and Mexican cowboys, blended with the inspired melodies and harmonies of the traditional church choirs of the early missionaries,” according to press materials.

Steve and Eydie Gorme were a class act, and now local performers Mary Anne Anderson and Steve McCann will offer a loving tribute to the famed pop vocal duet on Saturday, March 14 (7:30 p.m.), and Sunday, March 15 (3 p.m.), in A Tribute to Steve and Eydie at CCAT (Cambria Center for the Arts Theatre. The backing band includes guitarist Doug MacDonald, vibraphonist/pianist Charlie Shoemake, bassist Dylan Johnson, and drummer Darrell Voss. “I’ve always loved their song choices,” said Anderson. “Steve in his tux and Eydie in her gowns were the quintessential ‘cool’ couple back then. Style is back in fashion, and the musical stylings of Steve and Eydie deserve a second notice.” Tickets are $20 at brownpapertickets.com.

It seems like there’s been a lot of Beatles tribute shows lately, but that’s OK because the music of the Beatles never gets old. Rain: A Tribute to the Beatles is next up this Monday, March 16 (7:30 p.m.; all ages; $48 to $80 by calling 756-4849), at the SLO PAC. The Associated Press called this all-new Broadway show “the next best thing to seeing The Beatles.” The band plays music from throughout The Fab Four’s career: “I Want To Hold Your Hand,” “Hard Day’s Night,” “Sgt. Pepper’s Lonely Hearts Club Band,” “Let It Be,” “Come Together,” “Hey Jude,” and more—all while LED/HD screens play multimedia content behind them. Be warned: This is a high volume show!

Next Thursday, March 19, jazz greats Ramsey Lewis (piano) and John Pizzarelli (guitar, vocals) will pay homage with Straighten Up & Fly Right: A Tribute To Nat King Cole, in the SLO PAC (7:30 p.m.; all ages; $30.40 to $58 at 756-4849). “Lewis and Pizzarelli have crafted a tribute to the titan of ’50s vocal pop, from his numerous hits—‘Route 66,’ ‘Paper Moon,’ ‘Unforgettable,’ ‘Sunny Side of the Street,’ just to name a few—along with those singular tracks of sophisticated cool jazz that have influenced their own careers,” according to press materials.