I dare you to listen to Michael Franti’s new song “Once A Day” and not feel inspired, uplifted, and restored. The video is filled with people from all walks of life—the disabled, LGBT, old, young, black, brown, white—with one thing in common: They all embrace their place in the world community. 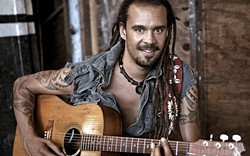 Franti gave New Times a ring between concert dates to talk music and politics—two things that have been central to his life since his first industrial band The Beatnigs (1986 to 1990). I first heard him when he formed the hip-hop act The Disposable Heroes of Hiphoprisy (1991 to 1993), and I’ve always thought his politics were one of the most compelling elements of his long career. What are his biggest political concerns these days?

“Well, my politics stem from one thing, and it’s the same reason I do music,” said the perpetually barefoot, 6-foot-6 gentle giant. “The one thing I care a lot about is people. Today when you look at the world, we’re facing many challenges—environmental chaos, economic challenges, police shootings of black people and people of color—so many things we see every day, and right now we’re coming into an election cycle and we’re seeing the same things: people trying to make inflammatory statements to rile up their fan base and score those important points in the first quarter.”

For those following the upcoming election, the political landscape looks pretty bleak, but Franti tries to take a broad view.

“Right now, I try to look at each election from an historical perspective. Where we were as a nation eight years ago is very different from today. To imagine we have marriage for all people or that pot is legal in some states or to look at where we were after the real estate crash and where we are now, or how people—both Democrats and Republicans—are talking about prison reform. On the other hand, sometimes it feels as if politics move slowly and change is difficult. There are the broken promises of closing Guantanamo or getting us out of Afghanistan and Iraq. We should be using those resources toward a commitment to help educate people around the world and raise their standard of living so they don’t strap a bomb around their chest.”

Does he know whom he’s voting for?

“I haven’t made a decision about who I’m going to personally vote for. I really believe we can have politics that don’t divide our nation in two. That’s very important. I don’t look at issues from the left or the right. Policies or laws either help people or they don’t.”

Franti said he looks at issues from a “holistic” point of view, pointing out, for instance, that while fracking might lead to some jobs and energy, it’s a “short-term fix” that pollutes and can destroy water tables for “generations to come.”

He’s been advocating for social justice for nearly 30 years. Are things getting better or worse?

“I think things are for sure getting better. It’s the old adage of half full and half empty. Look at the advances we’ve made, how far we’ve come in terms of civil rights, our new acceptance of people living together that we didn’t have prior to 1965. Yes, we have a long way to go in that regard; we can do better, but if we have the idea that everything’s hopeless, we can’t move forward. If we have hope that every day things can improve, they will.”

He’s clearly an optimist, but does he ever get down?

“Yeah, I get down. When I saw that [church] shooting in Charleston, I was crying, ‘How can this happen?’ But I saw people coming together and supporting each other. In the end, I feel that those families who lost those family members did everything they could to make a horrible situation become positive. That’s one of the most powerful things anyone can do. How do we make the best out of these situations?”

Franti has a particular vantage point from which to see race relations in our country, mainly because of his complicated mixed heritage.

“Yeah, well, my birth father is an African-American and Native American and my birth mother is of Irish, German, and French descent, but I was raised by two Finnish-Americans who had three biological children and an adopted African-American son when they adopted me. I have one sister who’s a lesbian, one police officer brother—it’s all led me to see things in a broader way.”

“Her mother had been raped by her slave owner, which means one of my ancestors was a slave owner and one was a slave. When I said that out loud for the first time, man …” Franti said, his voice trailing off. “One of the main things I’ve learned is people are not always what they seem like on the surface. I’ve met people wearing Confederate flag belt buckles and they’re the nicest people. I met with the Dalai Lama a few weeks ago and performed for him, and afterwards we’re talking and he said, ‘When I saw you with your dreadlocks and tattoos, I didn’t know what to think, but I heard your music and it was inspiring, light, and joyful. It made me feel differently about you.’ Even the Dalai Lama makes prejudgments! I told him I thought his robe was cool, and he told me to get a robe like that, you have to be a monk, which means you have to shave your dreadlocks and make a vow of celibacy. He said, ‘I’m a monk with a lot of responsibilities, but you’re like a good monk without all the responsibilities.’”

The robe is cool and all, but celibacy? I think Franti’s path of spreading joy and enlightenment through music is probably a path he’s better suited to.

“Music taps into our emotions and core beliefs and makes us feel, and that inspires us to act, inspires us to believe. I’ve always been moved since I was a kid by artists whose politics were part of their music—Johnny Cash, John Lennon, Bob Dylan, Bob Marley, The Clash. I like other music. Calvin Harris makes great dance music, but it doesn’t make me feel a deep powerful connection. The same is true for leaders. Martin Luther King Jr. was an inspiration because he didn’t say you should go out and change laws. He said, ‘I believe in a land where black kids and white kids will not be judged by the color of their skin but by the content of their character.’ Music can inspire actions, thoughts, and beliefs.”

Franti’s verse from “Once A Day” summarizes his philosophy perfectly: “I heard the purpose of life’s to live a life full of purpose,/ And so don’t ever take for granted what the spirit has given you/ In the first verse,/ You might never get a second verse,/ This ain’t a rehearsal, you can’t put it in reverse./ Believe in yourself, don’t let nobody be a negative or tell you what to do. / Cause I know (cause I know)/ In this sweet, sweet life that just this much is true!” 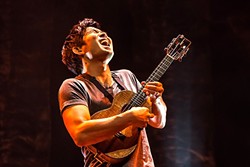 What Bela Fleck did for the banjo, Jake Shimabukuro has done for the ukulele, taking the instrument where no one before dared to go. The dude shreds, and the fact that he’s returning to the area this Saturday, Aug. 15, to play the Performing Arts Center at Cal Poly as part of an encore Cal Poly Arts and Otter Productions Inc. concert shows just how many fans he has on the Central Coast.

As Eddie Vedder, who’s no slouch on the uku, said, “Jake is taking the instrument to a place that I can’t see anybody else catching up with.”

The ukulele is synonymous with Hawaiian music and culture, having arrived there via Portuguese sugarcane workers and since adapted with influences of island folkloric, European music, and Spanish guitar. Shimabukuro mixes these and other sounds to create complicated arrangements that drift into spontaneous improvisation. Melodic, incendiary, and captivating—it’s music unlike anything you’ve heard on the ukulele.

If you need more inspiration, check out the documentary Jake Shimabukuro: Life On Four Strings currently on Netflix. His concert starts at 8 p.m. Call 756-4849 for ticket info. 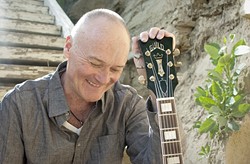 You learn something new every day. I had no idea that Creed Bratton of the TV comedy The Office was a bona fide ’60s music star who appeared on shows such as American Bandstand and Playboy After Dark with his band The Grass Roots (“Let’s Live for Today,” “Midnight Confession”) before getting his acting start in a 1975 episode of Kolchak: The Night Stalker in a role called “Man Entering Lab.”

He appeared in small roles in films like Heart Like a Wheel, Mask, and Neon City, but he’s always been a musician, and since joining the cast of The Office, he’s released three solo albums: Creed Bratton (2008), Bounce Back (2010), and Tell Me About It (2012).

This Friday, Aug. 14, at SLO Brew, Bratton plays a Good Medicine Presents and Numbskull Productions show that mixes his offbeat comedy and music (7:30 p.m.; 21-and-older; $15 presale or $17 at the door).

In addition, The Mighty Fine headlines SLO Brew on Saturday, Aug. 15, for a local punk rock showdown with Nothing Ever Stays, New Tomorrow, and Raise the Bear (7:30 p.m.; all ages; $10 presale or $12 at the door).

Opening will be our own local reggae heroes, Ras Danny & the Reggae All-Stars. Danny was raised in Trenchtown, Jamaica, and knew Bob Marley. He spends the bulk of his time in San Luis Obispo, but he still returns regularly to Jamaica to further his philanthropic endeavors of helping young people experience the joys of musicianship.

Danny and his band—Antoine Richardson, Gavin Thompson, and David Gorospe—have backed Grammy-winning reggae legends Black Uhuru and Lee Scratch Perry & the Meditations. This is a don’t-miss show for reggae fans!

Also at Vina Robles, catch Chris Isaak on Saturday, Aug. 15 (7 p.m.; $45 to $70; vinaroblesamphinteatre.com). The Grammy-nominated singer-songwriter, musician, actor, and talk show host has a career spanning 25 years, and will perform songs from his entire catalogue. 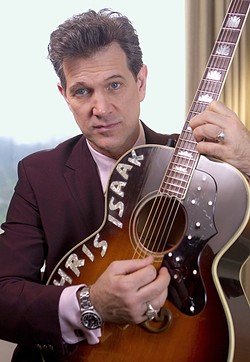 Dread Daze brings their authentic reggae sounds to Frog and Peach on Friday, Aug. 14, at 9 p.m. The LA-based band makes forays into hip-hop and rock, and will appeal to fans of Tribal Seeds, Rebelution, Steel Pulse, and SOJA.

Steynberg Gallery hosts Broadway song and dance man Gale McNeeley this Saturday, Aug. 15, at 7:30 p.m. He’ll be performing favorites from his 50 years of musicals with Betty Faas accompanying him on piano. The cover is $10.