Is Michael Franti the cure for cynicism? I know he's trying to be. His recent documentary film, Stay Human, chronicles five remarkable people from around the world doing the right thing against terrible adversity. His new album, Stay Human Vol. II, is another collection of socially conscious songs designed to open minds and bolster spirits, and his new song and accompanying video about gun violence called "The Flower" is a powerfully moving testament to healing amid our national plague.

Next Friday, May 31, Michael Franti and Spearhead return to Avila Beach Golf Resort (gates at 5 p.m.; concert at 7 p.m.; all ages; $35 general or $85 VIP, with kids 7 and under free; at Boo Boo Records and eventibrite.com). Nattali Rize will open the show.

Franti spoke to New Times by phone from Corpus Christi, Texas, where he and his band were scheduled to play a food bank benefit concert—the first concert of his upcoming summer tour.

"We're pretty excited to be back on the tour bus," Franti said. "We've been rehearsing the whole time and doing pre-production for the summer, so we're excited to get going."

If that makes it sound like being a rock star is a lot of work, Franti is quick to correct: "Well, it's the best job anybody could ever have. It's an amazing thing to be able to play music and make people happy for a living, so we're grateful.

"Carl and I—Carl's the bass player, Carl Young—we got on the tour bus yesterday for the first time in a year, and we were like, this is the best thing ever. We love it so much. He looked at me, smiled, and said, 'I can't wait to get going this year.'"

Franti's enthusiasm is infectious. I saw him last year playing the Thursday pre-concert before the Live Oak Music Festival, walking through the vendors' area trailed by a dozen kids, who clearly were enthralled to see a rock star walking among them.

"I go to any festival as a fan first and a performer second," Franti said. "I love the experience of walking around and checking out the booths, checking out other artists who are performing, but the main thing about a festival is just the people who are there, being together with other people who love music and who love life and who are willing to travel long distances and maybe camp out and go to the bathroom in a porta-potty—all for the love of music.

"I really love it, and you know, I've never been shy about taking time to hang out with the people. I love talking with people who come to our shows. I love the fact that we share common values, and the first is a love of music and people and the planet. My music has always been about how we get through challenging times, and so a lot of times when people come up to me they'll say, 'My sister's going through breast cancer, and she's here with me at the show and it's our first time out in a long time,' or 'The first time I came to your concert I came alone and I met this guy there and now he's my husband and we have two kids and we're at the show together.' Everybody has a connection to the music that is really beautiful and inspiring to me, so I appreciate what people bring to me."

Yeah, but does he comprehend the effect he's having on other people, how deeply moved they are by his music, message, and spirit? Is knowing that a weight and obligation, or is it uplifting?

"It's definitely more uplifting," Franti said. "It's why I got into music. I remember the first concert I ever went to was The Commodores with Lionel Richie. He ascended to the stage with this white grand piano singing 'Three Times a Lady,' and I remember thinking, 'Wow, this is so great! He's so cool! Look at him up there, and he's singing this song I love!'

"Then when I was 15, I went to my second show, and it was a man named Linton Kwesi Johnson, who's a reggae artist from England. He came out on stage and he read this poem, just a cappella, and it was a poem about a kid who had been arrested in England and he was writing to his mother from jail. He was arrested for defending his brother who was being beaten up by a police officer. He read this poem and then afterwards the band kicked in, and he did the song again with the music behind him. I was so overwhelmed—the emotion of this story he was telling and the way that he presented it—that I just thought, 'That's what I want to do. I want to tell my story through music.' Ever since that time, I've been laying into it."

Franti certainly has the right message for our times, one of openheartedness, inclusion, and hope.

"That concert inspired me and showed me there was a way to have a voice in the world and it was through music, but I also was inspired by just growing up the way I did," Franti revealed. "My [birth] mother is Irish-German-Belgium, and my [birth] father is African-American and Nottoway Indian from the mountains of Virginia, and I grew up adopted into this Finnish-American family. I always felt like I was kind of an outsider as a kid, and that led me to identify with other people who feel that way.

"My political and social voice over the years has been just to speak up for people who don't really have a voice, and to speak up for equality, to speak up for the rights of women, LGBTQ people, and also for our planet, the environment, and for people connecting and creating communities that can thrive economically and in nature."

That seems like a tall order in our tribalist culture, where some people call themselves Christian but use their religion to judge and condemn

"I grew up in a Christian family," Franti said. "We'd go to church three or four times a week. I've seen the hypocrisy there, but I've also seen it in every religion and every aspect of life. I believe the great battle that's taking place in the world isn't between left and right. It's between cynicism and optimism. There are people who believe it's possible to create a better life and a better world. When we lose that sense of optimism is when we quit, when we give up. That's why I make music, that's why I make films, to try to inspire other people by sharing my story of how I get down, too, and how I have to find ways to pull myself through it."

His song and video for "The Flower" really encompasses this idea of healing together. The duet is intercut with video portraits of gun violence survivors and the family members of those slain.

Franti explained: "Victoria Canal and I, we wrote the song, and it's about gun violence, it's about healing, it's about bullying, and so I thought, 'Why don't I go around the country and interview families who have been affected by gun violence?' And so I did. I talked to families at Parkland, people who had lost their son at the Orlando massacre, people who had lost family members in Vegas at the shooting there, people who had been affected by street violence or gang violence, people who had spent 25 years in prison for murder, who are now out working the communities to try to prevent kids from shooting each other. It really moved me, those experiences, so in the video I thought, 'I'll create beautiful portraits and in a sentence try to tell their stories.' It was an intense thing to sit with the families and hear them recount how they lost their loved ones."

You'd be hard-pressed to find a musical artist more committed to spreading positivity, which is why a Franti show is nearly a religious experience for a lot of attendees. It's not unusual to see tears streaming down people's faces in utter reverie.

"We as a band have a goal and a vision," Franti finished, "and our goal is to spread optimism through music, and we—every single one of us from the bus driver, to the production team, to the people in the band, to my wife and my family, our management, and everybody who works in association with us—we all have that same vision and that same goal. It's really a group effort to make it happen. I believe in the message we put out there. I work every day to find new ways to do it. I'm passionate about it."

Numbskull and Good Medicine Presents is bringing Johnny Cash tribute act Cash'd Out with Waylon Jennings tribute act The Outlaw to the SLO Mission Plaza on Thursday, May 23 (5:30 p.m.; all ages; $15 presale at Boo Boo's and ticketfly.com or $20 at the gate). 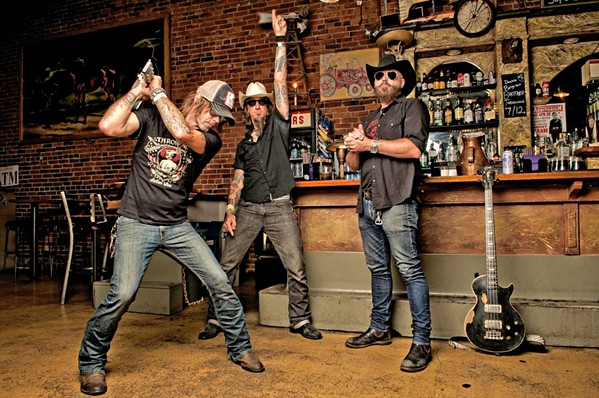 Supersuckers, the self-proclaimed "Greatest Rock 'n' Roll Band in the World" (they may be right!) play The Siren on Friday, May 24 (7:30 p.m.; 21-and-older; $13 presale at Boo Boo's and ticketfly.com or $15 at the door), with Speedealer and Hayley and The Crushers. 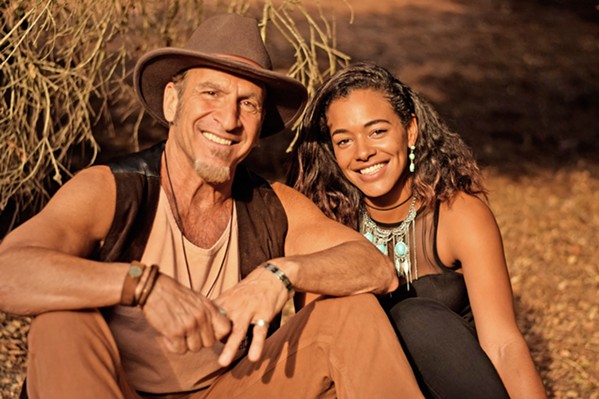 The 36th annual Arroyo Grande Strawberry Festival returns to Arroyo Grande with more performers than I can possibly list here, on Saturday and Sunday, May 25 and 26, in various locations in the Village. It's free, and you can pet a baby camel in between shows. Visit facebook.com/agstrawberryfestival for all the details. 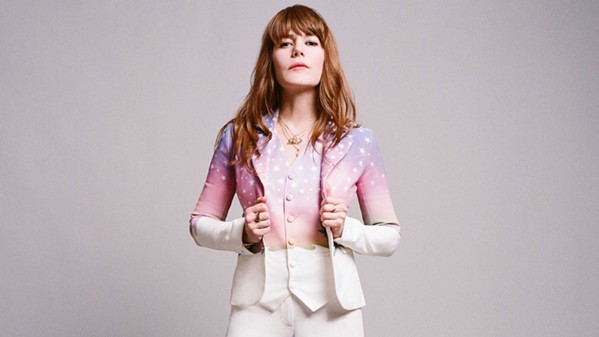 Jenny Lewis plays the Fremont on Saturday, May 25 (9 p.m.; 16-and-older; $42.56 at Boo Boo's and fremontslo.com). The former Rilo Kiley frontwoman and child actress in films such as Troop Beverly Hills and The Wizard is touring in support of her fourth album. 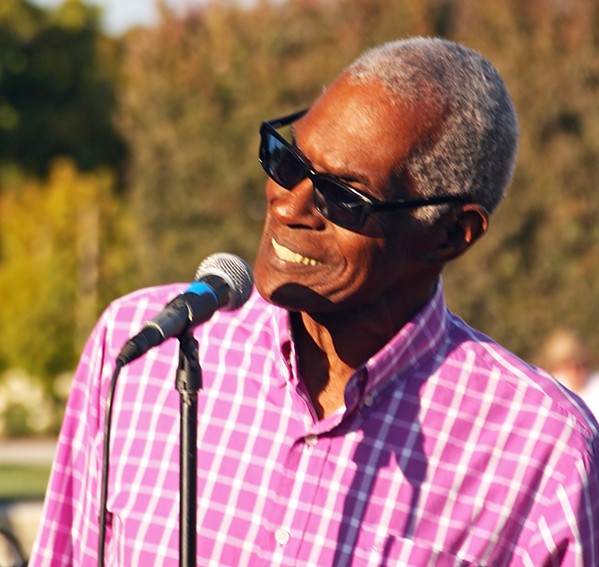 Don't miss the Unfinished Business Memorial Day Jam, a benefit concert for disabled veterans, on Monday, May 27, at the Avila Beach Golf Resort (gates at 11:30 a.m., music from 12:30 to 5 p.m.; $20 presale at ubmemorialdayjam.org or $25 at the gate). See 2018 The Voice finalist Pryor Baird, Dog Party, and Unfinished Business, with guest appearances by Terry Lawless (U2 keyboardist), Mike Arriola (of Steppin' Out), Dudley Gimpel (of Mojo Combo), and Roy Henry ("Ray Charles" of the Central Coast), plus Kelly Atwell, Steve Howard, Donna Lu and Matt Kim, and Paul Dunn.