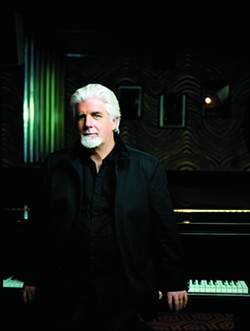 Michael McDonald’s got one of those amazing rock’n’roll histories that’s hard to deny. In the latter half of the ’70s, he was the singer and keyboardist for The Doobie Brothers. He was also a one-time member of Steely Dan, which no one ever seems to remember. When The Doobies finally disbanded in 1982, McDonald embarked on a solo career that took him further into the R&B territory that he’d been leading The Doobies toward.

His smooth, light, jazz style quickly became a favorite of adult contemporary audiences, and songs such as “I Keep Forgettin’ (Every Time You’re Near)” and “Yah Mo B There” with James Ingram became big hits. He paired with Patti LaBelle for “On My Own,” a lovelorn ballad that was a No. 1 smash hit. His song “Sweet Freedom” became the theme song for the 1986 Gregory Hines and Billy Crystal comedy Running Scared.

In the ’90s, McDonald appeared on the Aretha Franklin hit “Ever Changing Times,” giving him further street cred in the R&B community. Of course, what many remember McDonald for are Doobie Brother classics such as “What a Fool Believes,” “Takin’ It to the Streets,” “It Keeps You Runnin’,” “Little Darling (I Need You),” “You Belong to Me,” “Take Me in Your Arms (Rock Me a Little While),” and “Minute by Minute.” Does he rest on his laurels? Heck no! He just enjoyed two recent genre-busting guest spots with alternative buzz bands Grizzly Bear and Holy Ghost.

“Along with his musical contributions, McDonald has long been an active humanitarian,” said his bio. “Over the years, he has lent his performing talents to many causes and benefits, including the Toys R Us Children’s Fund, MusiCares, the National Council of Alcoholism and Drug Abuse, and the 7UP Grammy Signature Schools Program. Most recently, in April 2011, he was part of a star-studded lineup at Kokua For Japan, a concert that raised $1.6 million for tsunami relief.”

Born in St. Louis on February 12, 1952, McDonald came to music early. His bus driver dad was an amateur tenor who’d once sung with Bob Crosby and the Bobcats. McDonald made his singing debut at age 4 warbling “Love is a Many Splendored Thing” for his parents and a roomful of friends. After toying around on banjo and guitar, McDonald discovered the piano and was soon writing his first songs and doing the time-honored apprenticeship with bands in the family garage.

“And at the heart of it all, there was that voice,” continues his bio. “The dark chocolate tone, the husky vibrato, the keening falsetto that always seems to carry the ache of unrequited love. McDonald belongs to an elite group of blue-eyed soul vocalists—Van Morrison, Rod Stewart, Daryl Hall—whose sound is recognizable after a mere two notes.”

And while we’re on the subject of Otter Productions, Inc. and Cal Poly Arts, I should tell you about Jason Mraz in a rare acoustic performance, coming to the PAC on Wednesday, March 19, at 7:30 p.m. (Tickets are $75 to $95; call 756-4849). Raining Jane will open the show.
Mraz, a two-time Grammy Award winner and six-time nominee, made pop history with his record-breaking classic single, “I’m Yours,” while also earning platinum and multi-platinum certifications in more than 20 countries. He basically went from the San Diego coffee house scene to arenas, amphitheaters, and stadiums all over the world.

“In addition to his exceptional musical talent, the San Diego-based troubadour has proven a truly diverse creative presence: a dedicated surfer, farmer-gardener, filmmaker, and photographer, Mraz is first and foremost a committed global citizen. His impassioned social activism and philanthropic efforts span wide-ranging environmental advocacy and ardent support for LGBT equality,” according to press materials.

What’s old is new. Nothing proves that more than the resurgence of old school R&B from guys like James Hunter, Mark Ronson, Mayer Hawthorne, and the Daptone Crew. Add Nick Waterhouse to that group. 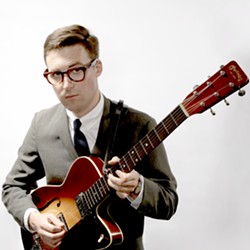 The 25-year-old powerhouse “evokes the back-alley thrill of New Orleans, Detroit, and Memphis in their heyday,” as his press materials note. Ask him to pinpoint his style and he shrugs, “American music. And I know that’s pretty general, but it is what it is. I have spent so much of my life immersed in this stuff, because I wanted to figure it out, [yet] all I figured out was that there was no plan. To me, [the music I play] is not a ‘type’ of music,” he emphasized, “it IS music. The records I listen to ARE music. A record is a moment in time, and something recorded in 1955 is the same as something recorded in 2010.”

He records and plays on vintage equipment and open-reel tape machines. If you heard his music and didn’t know the context, you’d be hard pressed to accurately date his sound. That’s why this dude’s awesome! See Nick Waterhouse on Friday, March 14 (7:30 p.m.; all ages; $10 presale or $12 at the door). Local DJ extraordinaire Malik Miko Thorne will open the night with some vintage wax.

Also at SLO Brew this week, check out L.A.-based instrumental duo El Ten Eleven, which conjures up a fat sound with nothing more than a doubleneck guitar-bass, drums, and a looping pedal. DWNTWN will open the Saturday, March 15, show (7:30 p.m.; all ages; $12 presale or $14 at the door).

Robi Duganne used to be a regular fixture in the local music scene, but I haven’t heard from him lately … until recently when he wrote to tell me about his new album.

“It’s been a long time coming,” said Duganne, who’ll present a pre-CD release concert on Sunday, March 16, from 1 to 4 p.m. at Poalillo Winery in Paso. “After recently traveling and performing around the world, get ready to enjoy a rich blend of local artists who have contributed their talents to my soon-to-be-released first album. It’s a very exciting album with a fully orchestrated sound and a high production value. Since recently completing this CD, Robi 1, I want to share the project with friends and family who were such a vital part of my musical journey. Please come join me, Tyson Leonard, Tracy Morgan, Rick Beaumont, Timo Beckwith, Richard Green, and special guest artists at the Italian Villa of Poalillo Winery for a celebration of great music, wines, and food.”

Duganne also informed me that his song “No Pretense” is getting play in Russia, no less! “It was featured on a Russian CD and was recorded in Russia,” Duganne said. “I’ll be back in Russia to perform in the fall.”

I listened to “Whispering Wind,” and it has a great world beat sound with Duganne’s rich vocals and warm guitar sound, not to mention some great flute. Learn more at robiduganne.com.

The Salome Chamber Orchestra returns to the Central Coast for a benefit concert this Friday, March 14, at 4 p.m. in Temple Ner Shalom in SLO ($60 premium seating or $30 general admission at salomeinconcert.eventbrite.com). Proceeds will benefit the JCC-Federation of San Luis Obispo and Central Coast Autism Spectrum Center. “We’re thrilled to welcome the New York-based group, Salome Chamber Orchestra, back to the Central Coast,” said concert organizers. “Since Salome’s visit last March, they have graced the stage at Carnegie Hall and generously played at numerous benefit concerts throughout California. Salome brings a young, hip edge to chamber groups and consists of top-ranking graduates from The Curtis Institute of Music, The Julliard School, Manhattan School of Music, Princeton University, and Yale University.” Seating is very limited.

“We’re featuring a pair of outstanding singer-songwriters at three of our showcases this week,” said Songwriters at Play co-producer Bonnie Nelson-Key. “Lynn Langham and Doug Gill are touring from Nashville and will share the stage as they’ve done many times at such venues as The Bluebird Cafe.” See them Friday, March 14, with John Batdorf and Kevin Fisher at D’Anbino in Paso Robles (7 p.m.); Sunday, March 16, at Sculpterra Winery in Paso Robles (1 p.m.); and Monday, March 17, at Bon Temps Creole Café in San Luis Obispo (6:30 p.m.). “Both are accomplished performers, as well as writers for major recording artists. Lynn’s song ‘Old Yellow Moon’ is the title track of Emmylou Harris and Rodney Crowell’s Grammy-winning CD. She has had songs recorded by Wynonna, Carolyn Hester, Ty Herndon, Trisha Yearwood, Lynn Anderson and Holly Dunn. Doug wrote ‘I Just Come Here for the Music,’ a Grammy nominee last year for Don Williams and Allison Krauss. He’s also been covered by Patty Loveless, Pam Tillis, Chris LeDoux, Tammy Wynette, Wynonna, and the Marshall Tucker Band.” Find out about all this week’s showcases at songwritersatplay.com.

“Expect the unexpected,” said Cal Poly Director of Jazz Studies Paul Rinzler about the upcoming Just Jazz concert. “Because jazz is improvised, even the musicians themselves can be surprised by what they come up with on the spur of the moment. Some of the best and most memorable moments from past University Jazz Band concerts have been things that no one could have imagined beforehand.” See Cal Poly’s University Jazz Bands on Saturday, March 15, at 8 p.m. in the Spanos Theatre (tickets are $12, $9 for students, seniors, and Jazz Fed members, available by calling 756-4849).

Acoustic flamenco guitar master Robby Longley returns again to Painted Sky this Saturday, March 15, at 8 p.m. “He weaves a very distinctive style with a beautifully orchestrated neo-classical/flamenco fusion of world music in which Robby uses flamenco technique to produce guitar music that is not traditional flamenco,” according to concert organizer Steve Crimmel. Tickets are $15 at Boo Boo Records, Cambria Music Box Shoppe, or by calling 927-8330. 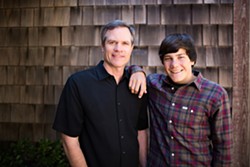 With St. Paddy’s Day just around the corner, you can get in the mood when father and son duo Young Ireland performs on Sunday, March 16, at 3 p.m. in La Perla del Mar Chapel in Shell Beach ($13 presale at brownpapertickets.com or $15 at the door). Young Ireland is Patrick and Michael O’Hara, a folk duo with roots in the West of Ireland and a son and grandson of Irish immigrants. They present inspiring, original songs and storytelling. “We’re also the featured artist on the Krush Lounge at 6 p.m. on Thursday, March 13, to promote the show with Suzanne. Then we’re taking the act south at the end of March to perform in the San Diego Folk Heritage Concert Series and then at the Coffee Gallery Backstage,” said Patrick. Expect “original songs reflecting the spirit of the Irish struggles, triumphs and traditions in both Ireland and America from the 1600s to modern day.”

Mick Moloney and Athena Tergis will appear in concert at St. Benedict’s Church this Sunday, March 16, at 4 p.m. to present “Irish and Scottish Music, Song, and its Ever Evolving Story” (a $20 donation is requested). Mick Moloney is an internationally known author, musicologist, university professor, and professional musician who “brings depth and life to his music through tales of the history of Irish music and its journey to America.” He’s also a top-notch Irish tenor banjo player. Athena Tergis, born in Manhattan and raised in San Francisco, “took up the violin at age 4, developing her quick ear at an early age. Inspired by the Valley of the Moon Scottish Fiddle Camp, she found her true voice in the folk music of Scotland and Ireland. Athena lived and played in Ireland for over three years, and then moved to New York to star as the lead fiddler in Riverdance on Broadway.” This is a don’t-miss concert for Celtic music fans!