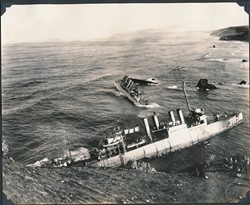 Fourteen southbound U.S. Navy destroyers drifted off course the evening of Sept. 8, 1923, in heavy fog and abnormal ocean conditions. Currents manipulated by a major earthquake that struck Japan a week earlier fooled the squadron navigators. Contemporary accounts also speak of misleading radio signals the ships received prior to the accident. The destroyers were about 10 miles north of their intended bearing and moving toward a rocky coastline at 22 knots.

Expecting to cruise into Santa Barbara Channel, Commodore Edward H. Watson ordered the squadron to move into a tight formation. Around 9 p.m., his USS Delphy and eight other destroyers ran upon the rocks covering a treacherous stretch of coastline known as Honda Point. Seven of the ships began to founder.

“All vessels are believed to be a total loss,” the Associated Press wrote in the first wire to go out from what would become the largest peacetime sinking of naval vessels in American history. “The wrecked destroyers are fast breaking up under the pounding of the surf.”

Sinsheimer had spent the summer in a struggle with the state to secure the water rights so the city could build a reservoir on Lopez Creek east of Arroyo Grande. His tenure had otherwise proven uneventful after the contentious 1919 election that sent the son of German-Jewish immigrants to City Hall.

No copies of the Honda Point emergency telegrams exist today, but newspaper accounts provided some details about the local response. The Navy arranged for a special supply train to leave SLO’s Southern Pacific station that night for Lompoc, the nearest railroad town to Honda Point. Nurses and doctors across SLO received wake-up calls to report before the 3:30 a.m. departure. Another train was supposed to roll into town with about 100 wounded sailors at 4 a.m., but that later proved unnecessary.

Sinsheimer, meanwhile, gathered clothes and supplies to aid the rescued sailors and response crews. Word apparently reached SLO that food stores in Lompoc appeared insufficient to feed everyone being rushed to Honda Point. One grocer and several restaurants across town went to work making sandwiches. Sinsheimer sent out taxis to move all the collected supplies and rations to the train station.

In the hours after the wreck, there were more freezing and injured survivors to care for than bodies to recover. A group of Lompoc women fed the wounded the only food available—cakes and doughnuts. U.S. Navy Lt. C.V. Lee commanded the recovery crews forced to camp on a rugged beach where the only structure—a small shack—had been converted to a morgue.

“The plight of the 18 men under the command of Lieut. Lee is not a happy one,” the AP reported. “They are camping on a windswept sandy bluff with only such shelter as scanty blankets can afford.”

The USS Delphy, Nicholas, S.P. Lee, Chauncey, and Young wrecked near enough to the shore that most of their crews managed to fight strong ocean swells and swim to safety. The USS Fuller and Woodbury wrecked more than a hundred meters offshore on a particularly nasty crag subsequently named Destroyer Rock. 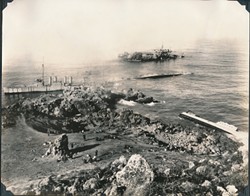 A total of 23 sailors died at Honda Point, and all but three of them drowned when the breaking waves rolled the Young in less than 90 seconds. James T. Pearson, a seaman on the Delphy, reportedly went mad after swallowing crude oil and vigorously fought his shipmates’ attempts at rescue. They tied Pearson to the hull of the ship, which the violent waves split in half before help could arrive.

The crews of the Woodbury and Fuller survived with the aid of an amateur rescue crew. Fishing boat captain G. Noceti was nearby casting nets when the accident happened. He piloted the Breno de Roma through the break multiple times to rescue 150 sailors trapped on the two ships beached on Destroyer Rock.

“Had it not been for this Italian,” wrote one reporter, “it is thought the loss of life would have been far heavier.”

The Navy sent the most critically injured to Santa Barbara for medical treatment, but almost every sailor had lacerations on his hands and feet from trying to escape the sea on volcanic rock. Exposure became a major problem for the survivors waiting in Lompoc. However, no one else died as the Navy managed to evacuate the remaining survivors to San Diego within a few days.

Weeks after the incident, Sinsheimer received a letter from Acting Secretary of the Navy Theodore Roosevelt Jr. thanking SLO for its role in aiding the Honda Point rescue efforts. The eldest son of former president Teddy Roosevelt assumed office that autumn on behalf of Edwin C. Denby, who was under federal indictment for his role in the Teapot Dome scandal.

The Navy Department desires to thank the Mayor and citizens of San Luis Obispo, California, for the timely and effective assistance rendered by them on the occasion of the grounding of destroyers at Honda, California, September 8, 1923.

The despatch (sic) of the first relief train with food, blankets, and medical supplies by the citizens of San Luis Obispo is highly appreciated by the Navy.

Acting Sec. of the Navy.

Sinsheimer served another 16 years as mayor and oversaw many significant public works improvements. At his death in 1951, his estate asked the city to use his 20 years of uncashed pay warrants to create a charitable trust.