Perinet After Hours occurs the third Wednesday of every month from 5 to 7 p.m. at Tolosa Winery, 4910 Edna Road in San Luis Obispo. Reservations can be made by phone at (805) 782-0500 or by email at concierge@tolosawinery.com.

The other night, my husband, Greg, and I attended an overcast Wednesday Perinet After Hours event at Tolosa Winery in the heart of Edna Valley. This is one of those events that anyone with a yearning for romance needs to know about and get comfortable with, whether your style is monumental movie scenes such as Jack and Rose on the bow of the Titanic or brief moments of light in the darkest of situations such as when Life is Beautiful's Guido sneaks off to play Offenbach's Barcarolle on the gramophone for Dora.

But romance doesn't have to be so scripted. For me, the best romantic moments almost always involve music, food, and wine. The night I fell for my husband, on our first date, he poured me a glass of wine and cooked me deep-fried, stuffed coconut chicken. I was already smitten, learning that he knew how to work a deep fryer, but after that he played me a song on his guitar ... and that was it. 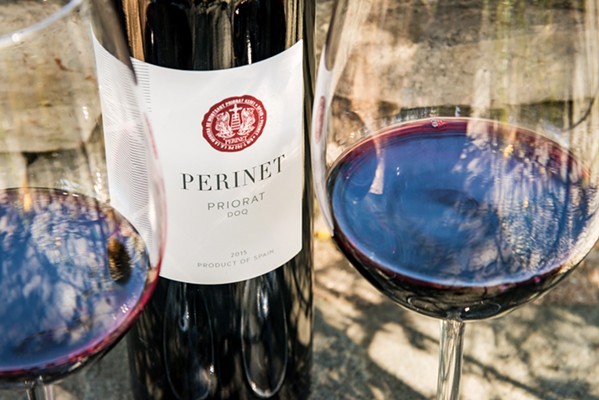 Tolosa had these kinds of Cupid maneuvers in mind, I'm sure, when they came up with Perinet After Hours.

Tolosa transforms their winery every third Wednesday of the month for an evening of European romance with Catalan (Catalunya) wines paired with charcuterie and cheese. The wine varieties are rare and usually reserved for the wine club. This is the kind of night that adds all the ingredients and then some: soft songs, warm wine, and delicious tapas, reminding you of all the good times, like my coconut-chicken night.

The pairing, $35 per person (complimentary for Perinet wine club members), is an easy break in life if you'll only surrender to it. Guitarist Jon Stephen takes everyone on a little trip to Spain with the poetic sounds of his classic acoustic guitar. My husband and I leaned back and imagined we were on holiday.

After Hours took place in the upscale Heritage Room where most wine club events are held, with 6-foot-tall crystal-clear windows opening to a stunning spring-colored panorama of slopes covered in pinot noir vines, grassy knolls in every shade of green, and charming orchard trees. The view is a plein air painting waiting to happen. On the walls are large framed fine art photographs by local Duane Hall. The room sits next to a bustling tasting room with a glass wall overlooking stainless steel tanks.

"No work talk, OK?" We agreed that would be the best course of action.

The room was full: groups of friends, couples, singles reading novels with their noses in the wineglass as they picked at their plates. The winds from Morro Bay could have been the sea breeze off the Mediterranean. Two ladies cozied up to the guitar player. One of the Tolosa hosts said jokingly, "You can't take him with you."

Tolosa's sister winery, Perinet, is located 90 minutes southwest of Barcelona in the world-renowned Priorat wine region, specializing in the traditional varieties of garnatxa, carinyena, syrah, and cabernet sauvignon. Toni Sánchez-Ortiz, who had been a winemaker and viticulturist in the Priorat region for 20 years, joined Perinet Winery's team in 2015 to direct the vineyard work and the winemaking process.

At After Hours, the staff will pour you grenache, but for fun, they will pronounce it the Catalan way: "garnatxa," which sounds like "garn-a-cha." Perinet and Tolosa are under the collective of three wineries that share the same passionate wine consultant: Jean Hoefliger. The third sister—you may already know of its Bordeaux wines—is Alpha Omega in Rutherford.

The pairing includes five tastes of rare Spanish varieties and Perinet blends that retail between $70 and $140. As soon as the SLO weather embraces summer wholeheartedly, Perinet After Hours will move outdoors onto the Tolosa Terrace, from 5 to 7 p.m.

The wines will change each month to feature what's in the wine club box. We started with the deep purple, aromatic 2015 Priorat Perinet red blend, a full-bodied, rich blend of garnatxa, syrah, carinyena, and cabernet sauvignon.

Collette Van Gerwen-Smith, our host for the night who works for Tolosa and is married to a local chef, was reminiscing on her two visits to the Perinet winery in Catalonia. She described her admiration for the drastic Montsant Mountains and ancient terrain surrounding Perinet. She brought us a pile of slate—or llicorella—from the Priorat region to hold in our hands. You can taste the old world slate powder in the wines because the dramatic slopes shed the rock into the soil. Collette pointed out that the artistic lines on the label represent the steep slate slopes where the Priorat grapes grow.

"The perfect wine," Greg declared as he sunk into the sofa next to me. We were each served a plate of local charcuterie, Spanish cheese, toasted Spanish Marcona almonds (as big as macadamia nuts), and cranberries all sourced from Cured and Cultivated in Paso Robles. The plates held two large wedges of Spanish cheeses: a triangle of Gran Valle de Montecelo, an herbaceous aged sheep's milk manchego, and a Cinco Lanzas Gran Reserva from aged sheep, goat, and cow's milk. The manchego was delicate, with a nutty, caramel crunch and a surprise finish of cinnamon.

"In Barcelona, typically, you'll find a lot of different types of tapas," Collette said. "They'll sometimes serve it with a fresh slice of baguette. You'll get your chorizo sausage. You'll definitely have manchego. Those are your staple, signature tapas to begin with before you get to your heartier dishes."

I was glad I had my own plate and didn't have to share with my husband. I love him, but when it comes to cheese, I don't want to feel bad about having more than I should on a shared plate.

Collette said people appreciate the opportunity to taste something new.

"It's different," she said. "You see a lot of Rioja, but you don't see much Priorat."

After the Priorat, we tasted the deep ruby 2015 Perinet estate syrah, from a small production of only 37 cases, fermented in French oak, with that distinctive palate of slate powder and black cherry coulis. The next wine, also rare (only 45 cases), was the 2015 Perinet garnatxa negra, followed by the 2016 Pendents carignan ("carinyena" in Catalan). Best for last, we tasted the 2016 Perinet 1194. The 1194 is a blend of garnatxa (62 percent), carinyena, and syrah.

It's siesta time in theory, a two-hour lunch/dinner, a stroll through a perfectly groomed rose garden in the middle of a work week, when nothing matters but slowing to the moment. Δ

New Times contributor Beth Giuffre is lost in romance. Send your comments through the editor at clanham@newtimesslo.com.