The miracle migration of the monarch butterfly is being threatened, and one woman hopes to protect the dwindling population before it's too late

Disease and development, pesticides and pollution... these are just some of the dangers playing a part in the slow death of the Western monarch butterfly. 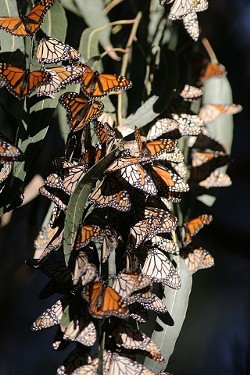 #The monarch isn't considered an endangered species and so receives no special federal protections. Over the last couple of years, however, the number of migratory monarchs that return to the Central Coast has plummeted. Once abundant in colonies exceeding 200,000, this yearâ€™s count is around 35,000 at the Pismo State Beach Monarch Grove, which has been considered one of the largest wintering sites for the insects in the state.

â€œThis is the last strand that we have in existence,â€? said Nipomo resident Sheila Boone. â€œWe need funding for management and restoration of Californiaâ€™s major habitat. If we donâ€™t restore those habitats, we will not have a Western migration.â€?

Boone, the fifth-great-granddaughter and direct descendant of frontiersman Daniel Boone, has been working for the past seven years to establish a butterfly conservatory that she hopes to call the Daniel Boone Butterfly Palace. During the past few months, Boone has launched an education outreach program to alert schoolchildren and the public of the plight of the Western monarch.

Experts are unsure exactly how many habitat areas along the Pacific Coast remain for migrating monarchs. Estimates hover around 250 or 300, including some of the Eucalyptus groves on the Nipomo Mesa, though only a handful are considered â€œmajorâ€? over-wintering sites, meaning those that can support monarch populations of 50,000 or more.

Lincoln Pierson Brower, professor emeritus of zoology at the University of Florida, believes that we might be on the verge of the demise of these prehistoric insects in the wild â€” or at least the end of what has been called the monarchâ€™s miracle migration.

â€œNorth America could just possibly lose the entire migratory phenomenon,â€? Brower wrote to Boone. â€œIt is unlikely that it could be revived by breeding monarchs in laboratories. My long-held view [is] that the monarchâ€™s migratory and over-wintering behaviors are an endangered biological phenomenon.â€?

Without formal protections, the monarchs continue to be threatened by development, pesticides, pollution, and the decline of protective groves. Boone stressed that the insects will continue to be at risk until the public understands the complexity of the butterfly and its major habitats.

Monarchs prefer to cluster in pine or Eucalyptus trees, both of which have been threatened recently by infestations: pitch canker for the pines and the red gum lerp psyllid for the Eucalyptus. As a safety measure, many trees are being tagged for removal to slow the spread of disease and protect life and property threatened by their possible collapse. The process leaves monarchs without protection from harsh winter elements.

Boone emphasized that development and disease were only two threats to the butterflies. Climate changes, diseases within the populations, and loss of wetlands have affected the species as well, but Boone hopes that convincing developers to preserve and manage the existing habitat will protect the butterflies â€” and be a boost to regional tourism.

Booneâ€™s message appears to be getting through to some developers and planners. Before the 1,000-acre Woodland Estate project in Nipomo was started, the developer of the property consulted with Dr. Kingston Leong, a biologist and professor of entomology at Cal Poly, to determine whether there was an active monarch colony on the property. Dr. Leong walked the entire site and came upon what he deemed to be a major over-wintering grove â€” precisely where the developer wanted to build the resort: on a hilltop with a 360-degree view. The developer, after some convincing by his planners, moved his resort to the south. When finished, the project will include a resort, more than 1,300 homes, and a butterfly habitat, complete with a park and viewing area. 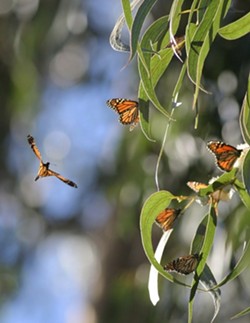 #Dr. Leong has monitored the Nipomo development since project crews started removing surrounding trees. He noted a drop in the butterfly population. He said it appears that the loss of the surrounding grove is altering wind patterns, but he said doesnâ€™t think itâ€™s too late to protect the butterfly colony.

â€œI suggested they plant new trees in certain areas to buffer winds in the future, and theyâ€™re willing to do that,â€? Leong said.

While increased development and other factors slowly destroy habitats, Dr. Leong sees management of existing groves as the only way to preserve the butterflyâ€™s unique migration. Interestingly, he believes that the monarchs will survive â€” but their migration might be in jeopardy.

â€œCalifornia is the only state in the union where butterflies mass into dense clusters, a rare occurrence that is only repeated in Mexico with the Eastern monarch,â€? he said. â€œThe phenomenon of the mass aggregations, at least in North America, is mainly a California and Mexican phenomenon. And yet it is not recognized as a national treasure, and I think it should be.â€?

Scientists speculate that, for millions of years, butterflies have embarked on one of the most remarkable migratory journeys of any animal. More bird-like than insect in behavior, the monarchs head north between late February and early March, following the route of blooming milkweed plants. They arrive in Canada for the summer months, then make their way back to the warmer Central Coast to stay for the winter, five generations later. Scientists can only guess as to how the monarchsâ€™ homing device works, allowing them to locate the same grove in which their great-great-grandparents had previously clustered.

To further investigate the insectsâ€™ remarkable internal migration mechanism is Booneâ€™s biggest dream. She hopes her facility will give scientists the chance to study these creatures while allowing visitors to enjoy their orange-and-black beauty. To make her butterfly palace a reality, sheâ€™s working on education outreach.

Boone began a couple years ago when she drafted a bill proclaiming Feb. 5 as Western Monarch Butterfly Day. It passed unanimously last November.

Booneâ€™s plans also include an extensive education outreach program to bring the issue into classrooms. Oceano Elementary and Santa Maria Montessori schools received a butterfly pack â€” featuring a video, coloring and activity books, and a CD of Booneâ€™s â€œFree as a Butterflyâ€? song â€” thanks to supporting sponsorship from Santa Maria Inn owners Judy and Hardy Hearn. As additional sponsors come forward, Boone will continue to expand her outreach into schools.

Boone also envisions her glass-domed tropical forest sustaining not only monarchs, but rare butterflies from around the world, creating a destination of its own. She estimates the cost at $300 million, and said she needs a minimum of 50 acres for the palace itself. She sees a grander project sitting on 300 acres, which would also include sensitive and vital habitat.

â€œThis is a major, master-planned, enviro-destination tourism development,â€? Boone said. â€œI want to see California become the biggest butterfly garden state in the union. We have the worldâ€™s rarest butterflies.â€?

As she continues to seek land for her project, Boone is lining up media deals with PBS, Charter Communications, and CBS Radio in San Francisco. With mass communication available, she hopes to educate even larger audiences about the remarkable insect that, for thousands of years, has chosen to vacation here on the butterfly coast.