Migrations at Studios on the Park explores genocide, political murder, and slavery

Forced migration is an ugly concept. It ignites scenes of despondent, displaced refugees; of genocide; of family members being killed simply for their political ideology. 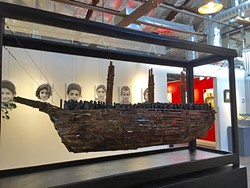 It clashes a bit harshly with the shiny idea of the immigrant who willingly sets out on his or her own, seeking a new land and a brighter future.

Still as troubling as it may be, the plight of the immigrant is a story that needs to be told, said Eve Chartrand, curator of the art exhibit Migrations, which is currently on display at Studios on the Park in Paso Robles.

“Every piece that I chose, I listened to their message behind the piece,” Chartrand said. “I wanted to be compelled and emotionally involved. We want people to be aware of the situation. Some of the pieces are really hard to look at. They show political murder, genocide.”

The show, which features 23 pieces across media like paintings, photos, and sculpture, explores how human migrations often occur at moments of political and religious unrest undoubtedly affecting the social and global landscape. This in turn leaves its mark on cultures and, of course, art.

Jim apRoberts, one of about 15 artists featured in the show, regularly works with the concept of forced migration. ApRoberts, who lives in San Luis Obispo, creates bright abstract pieces largely focused on los desaparecidos, 13,000 people in Argentina in the mid 1970s to the early 1980s who were “disappeared” by the government, simply for being associated with socialism. While one of his pieces in the show is a nod toward los desaparecidos, the other piece, Liberia, tells the tale of a good friend of apRoberts’ who was visiting America as a young adult when her family was killed during a coup back home in Liberia. The colorful painting is broken up into four different quadrants on the canvas, one showing people boxed away, another showing a cityscape.

“Migration is a powerful topic,” apRoberts said. “The painting that I did really deals with migration and going back and forth. When slaves were starting to be freed in the United States, some of them went back to Africa and formed the country Liberia. And then after her parents were killed, my friend couldn’t go back.”

Migrations will be on display at Studios on the Park in Paso Robles until Jan. 31.

Ryah Cooley has migrated all over the great state of California at rcooley@newtimesslo.com.