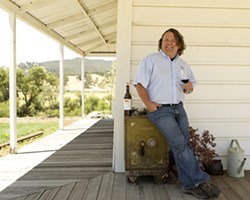 On a gloriously sunny Friday afternoon at Santa Margarita Ranch, I was fortunate to revisit this historic property and the well-preserved mission asistencia. Founded in 1774, it’s the ranch centerpiece and a stunning tribute to Father Junipero Serra and his 142 seraphic confreres who established 21 such missionary outposts along California’s El Camino Real, according to Santa Margarita de Cortona Asistencia, a Forgotten Missionary Foundation along California’s El Camino Real, by Msgr. Francis J. Weber.

The 15,000-acre ranch is the perfect setting for the upcoming Savor the Central Coast, a food and wine extravaganza, from Sept. 30 to Oct. 3, sponsored by Sunset magazine. It is expected to attract more than 8,000 food and wine lovers, and most festivities take place at Santa Margarita Ranch.

On this occasion, however, I was there for a tasting of Ancient Peaks’ current releases with the brand’s director of winemaking, Mike Sinor. Among our most renowned Central Coast winemakers, he has a long, notable history in SLO County and Santa Maria Valley. We tasted through two tiers of the Ancient Peaks wines, the estate label and the white label collection, all estate-grown wines. Starting with their only white, the 2009 Sauvignon Blanc, I found it is classic in its fruit characters of grapefruit, lime, and grass, hinting of pears and minerality. “The 2009 vintage over-delivers for the quality,” Sinor noted. “It’s a cool-climate wine that’s old guard and won us Best of Class at the California Mid-State Fair.”

The 2008 Zinfandel offers exuberant flavors of black fruit nicely nuanced with bright raspberry notes and black pepper. “It’s the wine that helped launch the company,” Sinor said, “and we sell a lot of the fruit to other wineries.” I chose the 2007 Syrah as a “pick” last week for its quality at a value price. Sinor said it’s a “small player in the portfolio,” but added that’s it’s a fun grape to work with. It has been highly lauded by nationally published critics. “We go through a series of blind tastings of the blends with our great team,” Sinor explained, “then we add tweaks. But in the end you’ve got to let the wine lead.”

The Merlot is made from two clones planted in Block 7 at Margarita Vineyard, which Sinor said is outstanding in this cool southern slice of the Paso Robles appellation. “We wanted this vineyard site to grow something sexy, then we blended it with a little Zinfandel, Petite Verdot, and Petite Sirah.” It’s a friendly, easy-drinking style that Wine Enthusiast magazine rated: “One of Paso’s best at a fair price.” The 2007 Cabernet Sauvignon, a gold-medal winner at San Francisco’s International Wine Competition, isn’t just a favorite of wine drinkers. Local winemakers love it, too; like Austin Hope, who buys it to blend Treana.

Ancient Peaks, established in 2005, is owned by three families: the Filipponis, Rossis, and Wittstroms. They jointly own Santa Margarita Vineyard, where most of the grapes are grown for Ancient Peaks. Each family has two generations involved in running it. Sinor was a consultant at first, and within a year he became the brand’s winemaker in January 2007. Most winemakers love their job, there’s no doubt about that. But few men or women who make wine exhibit the unbridled passion Sinor has for his craft, and I recognize that in his expressive wines.

I never met Sinor when he started out in the wine industry at Corbett Canyon’s tasting room. His passion for winemaking grew and he rapidly moved up. I met him in Santa Maria Valley at Byron in the mid-‘90s when he was assistant winemaker to pioneer Ken “Byron” Brown. Next, Sinor was hired as Domaine Alfred’s winemaker, where he stayed many years. It was recently renamed for its historic Chamisal Vineyard on the estate. Sinor worked with its founder, Terry Speizer, in modernizing winegrape growing. They brought in the new French clones, an expensive venture. But together they proved those Pinot Noir and Chardonnay clones excelled in Edna Valley. Sinor’s 2004 Pinot Noir Califa from Chamisal Vineyard earned critical acclaim from the most demanding critics, like Jim Laube of Wine Spectator and Robert M. Parker, Jr. of The Wine Advocate. Nevertheless, Sinor surprised everyone when he moved on to concentrate on his own unique brand, Sinor-LaVallee, in 2006. Sinor and his wife Cheri LaVallee-Sinor make limited amounts of their unique wines. Despite financial offers from people who wanted to be partners, they couldn’t imagine suddenly expanding production.

Fortuitously, Doug Filipponi asked Sinor to be consultant for a new brand he and his partners were creating, Ancient Peaks. There’s the reason Sinor has always stood out: He doesn’t see it as a second label, which automatically infers less quality to most people. Sinor saw this position as an opportunity to make value-priced wines of superior quality, and fully embraced it—not to mention his excitement in managing Margarita Vineyard, and taking on a completely new project. “Ancient Peaks is successful because it’s a great piece of land with a lot of people focused on it,” Sinor explained. “These wines speak about that place very well.”

The white-label collection is described by Sinor as, “The best of the best in our practices.” These unique varieties include Malbec, Petite Verdot, and cuvees that stand from the rest of each vintage. They’re usually from small blocks that may be farmed differently, have different barrel regimens, wines that other wineries usually label reserve. The 2007 Merlot Jackpot represents the finest two barrels out of 283 barrels, thus earning its special name. I loved the intense 2007 Oyster Ridge, a blend of Cabernet Sauvignon, Petite Sirah, Merlot, and Petit Verdot. “We’re doing the best job possible every day,” Sinor finished. “And it all adds up to this
result.”