MILES DAVIS: BIRTH OF THE COOL

Stanley Nelson (Freedom Riders) directs this documentary about horn player, band leader, and jazz icon Miles Davis, told through archival photos, home movies shot by Davis and his contemporaries, his manuscripts and paintings, and interviews with experts and those who knew him. (115 min.)

Glen "Complicated" is perhaps the best adjective to describe Miles Davis. He faced racism, addiction, and his own relentless anger, but he still created some of the most beautiful music of the '50s and '60s. In his late career and foray into electric music, his experimentation laid the groundwork for the house, hip-hop, and electronica styles. This elegiac cradle-to-grave biopic is informative, entertaining, and often sublime. It's not afraid to show Davis' dark side—his heroin and cocaine use, his occasional mistreatment of women, and the chip he carried on his shoulder. Actor Carl Lumbly supplies Davis' raspy voice, reading from his personal manuscripts. It creates a very revealing and personal examination of Davis, and it's bolstered by interviews with jazz luminaries such as Ron Carter, Herbie Hancock, Quincy Jones, and Wayne Shorter. We also hear from some of Davis' wives and lovers such as Juliette Gréco and Frances Taylor. Through it all is the music. I've always been a big fan of his earlier work, but watching this documentary gave me insight into Davis' constant drive to move forward, to push the music further, and to work with other really talented musicians and give them the space they need to create. It's pretty incredible that director Nelson managed to compress five decades of creativity into two hours.

Anna Lumbly did a fantastic job as the voice of Davis, and the archival footage along with interviews of everyone from musicians to childhood friends to lovers made for a dynamic trip through the troubled yet immensely talented life of the jazz legend. I didn't know a whole lot of his work toward the end of his life; similarly, I have always been partial to his earlier recordings like Kind of Blue and Sketches of Spain. What was clear is that Davis suffocated in stagnation—he was always interested in the next project, not the ones before. His son Erin reveals that his father never kept any of his old albums around the house. He had no interest in what had already been done. He was a man with many faults, but also a magnetism and unending wealth of talent. Women swooned for him, musicians wanted to be him—he was the definition of cool. Being raised in a wealthy family didn't shield Davis from the racism in St. Louis where he was raised, another chip on his shoulder he would carry through his life and that would lead to problems with police later on. This film really did span his life, a whole look at a life both blessed and tortured—and that soundtrack isn't bad either.

Glen You mention Davis' run-in with the police. That was clearly an especially vexing situation for him. He was smoking a cigarette outside a music club, his name on the marquee behind him, when a white police officer told him to move along. As Davis was explaining that he was performing inside, another white officer hit him over the head. He was taken to the police station. The photos from this episode are amazing! The look on Davis' face—bewilderment mixed with rage—are unforgettable. No wonder he had so much animosity toward American society. We also discover that his first trip to Paris was life changing. American institutional racism was nowhere to be found there, and he was treated with respect and celebrated for his talent. Davis' life could have ended early on several occasions. His drug use was prodigious. However, he also managed to bounce back, to reinvent himself, and to make new music. He had a terrible temper. He was incredibly cool and poised. His talent was undeniable. He punched his wife in the face. He was an inventive painter. He seemed like a poor excuse for a father. He was a genius. Complicated. Very complicated. 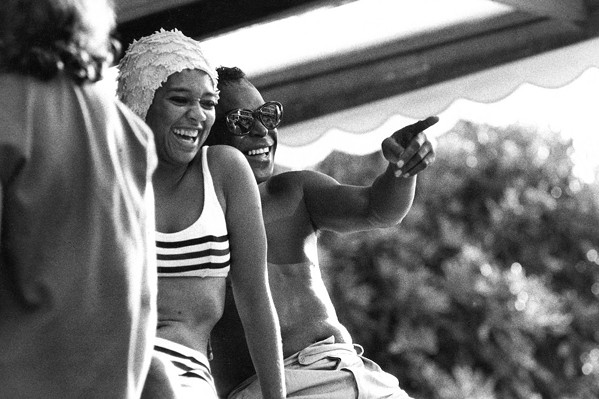 Anna He definitely could be a difficult person to be around, and he came near death many times because of his addictions, yet you still hear love and devotion from those closest to him as they share intimate stories, both triumphant and tragic. He was complicated but loved by those around him. Director Nelson was able to pull together a well-rounded group of those who surrounded Davis. Wives, girlfriends, musicians, and children, neighborhood pals—they all speak to the genius and the terrible temper behind the trumpet. Because it spanned such a wide amount of time, the film felt a little long for me personally, but I'm glad the filmmakers chose to cover his lifetime as a whole, not just the good (or bad) years. Anyone with an appreciation for both jazz and Davis' contributions to the genre are sure to eat up the rich story presented on the screen. You hit the nail on the head—he's one complicated character. Δ