Rumors that the SLO County Regional Airport might be responsible for a toxic chemical found in private wells in the Buckley Road area began immediately after the problem was first discovered.

And while investigators have yet to determine what role, if any, the airport played in the contamination of 12 private wells by the chemical known as trichloroethene (TCE), documents obtained by New Times revealed the possibility that the U.S. military’s past use of the airport might have contributed to the groundwater’s contamination. 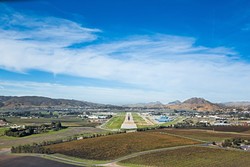 The initial mention that the military’s use of the airport could be a possible explanation for the TCE contamination occurred in a Feb. 26 letter from the Central Coast Regional Water Quality Board to airport officials.

“According to our available records, the SLO Airport was used by the United States military … between 1938 and 1946, followed by various private industries until the present for aircraft maintenance and storage,” John Robertson, the water board’s executive officer, wrote.

TCE was a chemical solvent commonly used to degrease metal and mechanical parts, including those found on planes. Before its use was phased out because of health concerns in the 1970s, TCE was the solvent of choice for the U.S. military and its contractors in World War II.

A 1999 report obtained by New Times states that the airport was designated as a Formerly Used Defense Site, or FUDS, by the Department of Defense (DOD). According to the report, the U.S. Army Air Corps and the California National Guard used 218 acres of the airport starting in 1938. The report stated that the Air Corps used the location as an aerial observation training center and built additional runways, barracks, hangars, and mechanic shops on the property. In 1943, the Navy also began using the airport as a training center in support of Pacific Fleet operations in World War II. Army and National Guard operations at the airport continued until 1941. The Navy discontinued using the property in 1946.

The 1999 report determined that the airport was eligible for funds under the Defense Environmental Restoration Program (DERP).

“[The program] allows us to go back to property that was owned or used by the Department of Defense and clean up any environmental hazards that were left behind,” said Lloyd Godard, manager for the program’s FUDS division in the Army Corps of Engineers’ Los Angeles District.

According to the report, the airport was inspected in 1997, but whether TCE or other hazardous chemicals were stored, used, or dumped there during that time remained unknown. The DOD report listed the acquisition and disposal records as “neither specific nor complete.” Godard said that while inspectors visited the site and reviewed records in 1997, testing for hazardous contaminants like TCE wasn’t conducted.

“There was no sampling done at that time,” he said.

Godard added that the airport still qualifies for mitigation funding under the program if it is discovered that the military’s use of the land resulted in contamination or other negative environmental impacts.

“If we miss something, it’s still part of the program and it could be a liability,” he said.

If that were the case, it wouldn’t be the first time that the military was responsible for polluting the land it once used with toxic chemicals. In 1999, the site of the former El Toro Air Force Base in Irvine was designated as an EPA Superfund site due to large-scale contamination beginning as far back as World War II. Among the impacts was a TCE groundwater plume that migrated 3 miles from two aircraft hangars. According to the Los Angeles Times, it took 15 years and $165 million to mitigate the damage.

The report also noted that at least 20 other current or former military installations in California were undergoing similar cleanup operations.

Whether the SLO County Regional Airport could be counted among those remains unknown, and the answer may not be clear cut. The airport continued to operate commercially during the same period that it was used by the U.S. military. Similarly, recent claims against SLO County filed by the residents impacted by the contamination list improper dumping of TCE in the ’60s and ’70s as the cause and make no mention of the military’s use of the site.

For their part, airport officials haven’t publicly mentioned the past military use either. In a Feb. 1 press release, SLO County Regional Airport Director Kevin Bumen said there was no record of the airport using TCE in the past.

In an April 25 email response to questions from New Times, county officials stood by their assesment.

“To date, there is no evidence that the airport is the likely source of the TCE found near Buckley Road,” wrote Guy Savage, an assistant administrative officer for the county.

Answers to questions about the airport’s possible role in the contamination, or the military’s historic use of the site, are months away. The Central Coast Regional Water Quality Board plans to begin soil and groundwater testing at the site in July and hopes to have the results by August.