At the 30-second mark, an assembled group of moms arranged their fidgeting kids into starting positions. Toddlers and infants were deftly positioned across laps and chests as the moms readied their breasts. Then the countdown began. 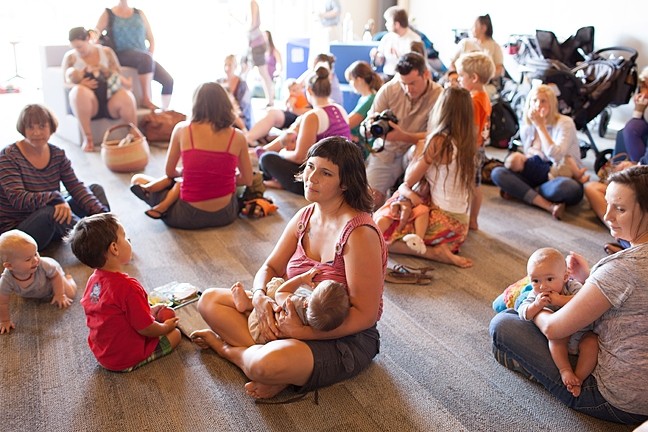 The room fell quiet, and one by one, the breastfeeding moms raised their hands to be counted among the legions of lactating moms across the world who were publicly breastfeeding at that very moment. All told, there were 45 latches in SLO, part of the 10th annual Big Latch-On. Close to 15,000 moms took part globally to raise awareness and confront negative attitudes about breastfeeding.

Public breastfeeding has become more popular in recent years, according to local doula and breastfeeding advocate Jennifer Stover, but breastfeeding women still face a lot of societal challenges. Stover is the education chair for the Central Coast Breastfeeding Coalition (CCBC), who organized the event.

“We’ve all heard the message ‘breast is best,’” Stover said, “but culturally, women are given mixed messages. Often new mothers are not given the tools or support to be successful at it.”

The event was held in a courtyard and conference room at MindBody, a local software company that caters to the health and wellness industry. After the latch, there was a series of discussion groups, with topics including “breastfeeding and employment” and “supporting mothers in a non-breastfeeding culture.”

California law explicitly supports public breastfeeding—women can legally breastfeed in any public or private place where they’re allowed to be. And employers are required to provide breaks as well as space (other than a toilet stall) for a mom to breastfeed or pump. But the reality is far more complicated for moms.

Outside, a group of women sat in the shade of an umbrella, nursing their infants and chatting about the event. One of the moms had a breastfeeding cheat sheet, with a map of downtown SLO indicating businesses that have a place for women to pump or breastfeed. Stephanie Goodwin, one of the moms, said she has become something of a connoisseur of park benches since having a kid.

“I go out, and am constantly looking for places I can feed.” Goodwin said. “I am finding benches I never knew existed.”

All three moms said they were working or planned to return to work soon. Bond Allen, who sat with the group, said without groups like CCBC and the La Leche League she might have quit breastfeeding a lot sooner.

“No one told me how hard this was going to be,” Allen said. “I went back to work, and now pumping is a big priority. It would be so nice to go on break and just go outside, but I have to take the time to pump.”

While state law supports pumping, it does not require employers to provide additional paid breaks or longer than normal paid breaks for breastfeeding and pumping, causing many moms to feel rushed or unsupported. The World Health Organization recommends breast milk only for infants in the first six months, and breast milk with food for six months after that, but an entire year of breastfeeding is a huge commitment for working moms.

Annie Woo, who is VP of customer service at MindBody, said most businesses don’t know how to support new moms. Woo said that when the company was beginning, they didn’t have a breastfeeding policy or infrastructure. Moms were told they could breastfeed in the shower room. Woo said she knows at least one mom who decided to stop breastfeeding, because it was too hard to do at work. When Woo became a parent, she instigated significant changes at her office. MindBody added six lactation rooms with pumps, fridges, and locking doors. The rooms are almost always in use, Woo said. MindBody also created an official breastfeeding policy and started talking to moms before they went on maternity leave.

“It was just one of those things we had to lean,” Woo said. “It’s not common knowledge at all, at least until you’re breastfeeding.”

In 2014, MindBody won the statewide Mother and Baby Friendly Work Environment award. Woo said supporting moms is good for the company too.

“We teach ahead of time,” Woo said about breastfeeding options at work. “Because it’s good for business. We want women to be working, and we want them to be healthy.”

The push to normalize breastfeeding, at work and in public, may someday seem quaint. How could something so essential be taboo? But in the meantime the “lactivists” are here, holding mass latch-ons, and encouraging women wear their “hooter hiders” as capes, #itwasneveracover.