Remember the guy who invented the pet rock? How about the garden variety pink flamingo? Or the Clapper? Probably not, but all of these people aside from their complete anonymity have something in common: They each made money by marketing a crazy idea. 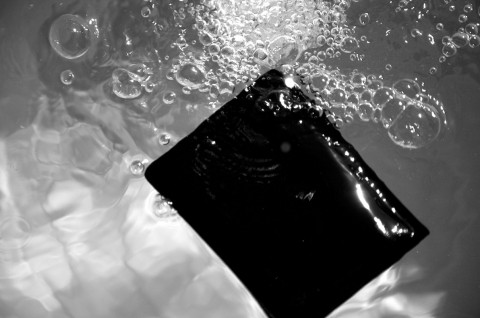 # Even if the general public won't remember who he or she is, the inventor of the next product everyone will be clamoring for might just be sitting in our own backyard. Thus, we introduce the world's first watertight wallet: The Clam.

Now, you may be asking, if necessity is the mother of invention, from what womb did this come? For that answer, good friends, we have to travel back about a year to Central America, where Vince Mohr and Rick Cramer were enjoying a family vacation that is, until they came upon the logistical problem of how to keep their paper and plastic money safe and dry while the family went swimming.

"Costa Rican money is all paper," Mohr explained. "It's not cotton like ours. You get it wet, and it just disintegrates."

Faced with the choice of leaving their goods on the beach or losing them to the salty water, they came up with a third choice: wrap their wallets in plastic sandwich baggies. They used dozens of them over the course of the vacation. The plastic may have kept out the water, but it proved to be a little bulky and awkward, not to mention tedious.

Mohr and Cramer knew, when they came back to the states, that they'd found a niche to get rich. They began working on a prototype and enlisted a Cal Poly business major to design packaging and a logo for The Clam.

The team went through four designs before they were satisfied with The Clam as it is today: a black neoprene pouch with a fold down the middle, held closed with a strip of Velcro. Unfolded, The Clam has a waterproof zipper and four pockets inside for various-sized goods. The final product is discreet enough to wear with a Speedo or bikini, but can still hold everything from keys to credit cards, cash to coins.

Cramer and Mohr are lifelong friends. Mohr introduced Cramer to his wife, the families vacation together, and for the past 20 years, the pair has worked together in the mortgage industry and worked out at the gym every morning. Now, they hope to pitch their idea to Oprah. The Clam has already passed the initial screening process to be sponsored by the media superpower for a slot on QVC as part of Oprah' s Next Big Idea search. In March, The Clam will go through second round eliminations. As a finalist, it would secure a spot not only on the Oprah Winfrey show, but 15 minutes of fame on the home shopping network, which reaches millions of viewers each day.

The Clam isn't on shelves yet, but look for it at surf shops, gift stores, and adventure outfitters near you. For more info, call 550-7644.