Million Dollar Quartet will show at the SLO Repertory Theatre through March 10. Tickets range from $40 to $55. Tickets for Gala Night on Feb.15 are sold out. The show runs about two hours long, including intermission.

Everyone wants to rave about triple threats. But really, a solid double threat—a performer who can really act and sing—has my attention.

And on opening night of the San Luis Obispo Repertory Theatre's production of Million Dollar Quartet on Feb. 8, the performers struck a perfect balance between theater and live concert, as they belted out hits like "Blue Suede Shoes" and "Hound Dog" while weaving a narrative about a moment in time when four rock 'n' roll greats came together for the first and last time. 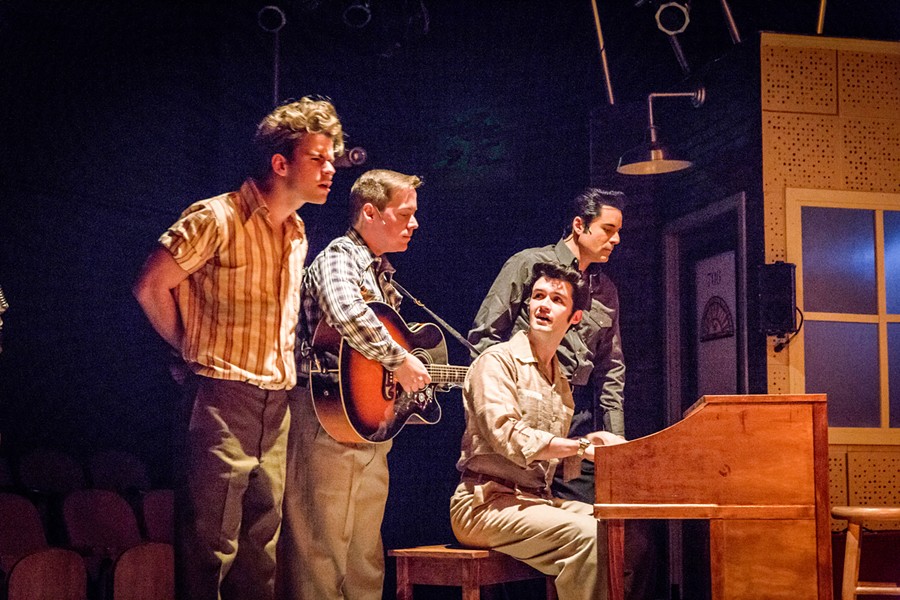 The entire show takes place in just one room: a recording studio at Sun Records in Memphis, Tennessee. But with the chemistry and combined musical talents of the cast, one room is all that's needed. The set is a 1950s throwback, complete with a black and white checkered floor, platinum records on the walls, and a tiny sound booth in the back.

It's 1956 and Sun Records owner Sam Phillips (Ben Abbott, Annie!) is recording a new album for rockabilly star Carl Perkins (Chicago-based actor Christopher Wren, who has tackled the role in previous stagings of the show; he also doubles as musical director), who is appropriately wearing blue suede shoes, while his newest star, Jerry Lee Lewis (Jared Freiburg, also reprising his role), plays piano on the session. It's also time for Phillips' other marquee artist, Johnny Cash (Las Vegas-based actor Cole, another repeat actor with the show and the youngest artist ever inducted into the Rockabilly Hall of Fame), to renew his contract—but he's nowhere to be found.

Then, out of the blue, who should show up but Phillips' first big star: the one and only Elvis Presley (Sacramento-based actor Sam Jones), who's accompanied by his fictionalized girlfriend, Las Vegas singer Dyanne (Sacramento-based actor Abbey Campbell). In real life, Elvis stopped by that night with Las Vegas dancer Marilyn Evans (the least known of all of Elvis' girlfriends). But what good is a musical if not everyone sings?

Led by director Michael Jenkinson (The All Night Strut), the cast comes together to charmingly portray a fleeting second in rock 'n' roll history, when four men were just trying to make music and didn't know yet how great they would become. Aside from the euphoric high the concert aspect of the show brings, Million Dollar Quartet also hints at the betrayal and tension among the group and the future sadness yet to come, from Elvis performing Perkins' "Blue Suede Shoes" on TV and falsely getting the credit for writing it, to Dyanne urging Phillips to take a job working for RC Records because Elvis "needs someone on his side."

Abbott in particular plays Phillips as a man who is rightly amazed at the music empire he built from nothing but equally confused that his best musicians have slipped out of his hands. An innate sweetness comes through in Abbott's version of Phillips that takes away whatever sting the real man must have felt after the last song ended in that small studio in December 1956. Δ

Arts Writer Ryah Cooley would like a little less talk and a lot more action. Send concise messages to rcooley@newtimesslo.com.