3 Leg Torso will take you on a mental travelogue

I think what I like best about 3 Leg Torso is that they don’t even try to sound like anything or anyone else. The fiercely independent, wholly original chamber quintet creates cinematic, unusual music that’s at once beautiful and arresting.

Their music delivers one surprise after another, moving from lush poignancy to quirky comedy in a blink. One second you’ll feel like you’re skipping through a sun-dappled forest surrounded by fairies and woodland creatures, the next you’ll find yourself in a smoky speakeasy with guys sporting pencil-thin mustaches and dolls charging 10 cents a dance.

Experience the thoughtful, unusual arrangements of 3 Leg Torso on Sunday, Nov. 14, at 7:30 p.m. in Steynberg Gallery. Tickets are $12, available at the venue.

On Thursday, Nov. 11, SLO Brew hosts Mae (an acronym for Multisensory Aesthetic Experience) in the “Goodbye, Goodnight, Farewell Tour” (6:30 p.m.; all ages; $14 presale or $15 at the door). Terrible Things will open.

Rock, pop, and soul singer Tyrone Wells returns to the club on Friday, Nov. 12, with opening act Andrew Bell (7:30 p.m.; all ages; $10 presale or $12 at the door). Wells is touring in support of his second album, Remain.

Folk artist Sean Haynes with opening act Mike Annuzzi plays the club on Saturday, Nov. 13 (7:30 p.m.; all ages; $16). Wrote Haynes, “Hello Sean Hayes here … choices ... chaos ... chocolate.   I write songs and sing in bars. Somewhere out there in the great bigness there is a Black Hole singing and eating up little baby stars. So be careful of mean people backed up by whiskey.   I like the sound of claw hammer banjo.   Years ago in North Carolina I played Irish music and traditional American songs in a band called The Boys of Blue Hill.   I also like PJ Harvey.”

Alternative rock act The Alkaline Trio plays SLO Brew on Sunday, Nov. 14 (7 p.m.; all ages; $18 resale or $20 at the door). The punk-fueled trio’s most recent of their seven albums is This Addiction. “It’s the first song on the record and the title of our new album,” said vocalist Matt Skiba. “The song takes heroin addiction as a metaphor for love. The whole record is really personal; all three of us have been through quite a bit since our last album, and it’s all expressed through this; all the songs are about the relationships we’ve been in, and so the record has a constant theme.”

Dorian Michael and Kenny Blackwell play frequently throughout the county, but I personally can’t recall them playing in SLO Town itself, which is why on Friday, Nov. 12, local fans of amazing acoustic music are in for a double treat. Not only can you feed your ears on Dorian and Kenny’s virtuoso sounds, but you can feast on amazing food by Sustenance Cooking Studio, which is hosting the 7 p.m. concert. Dinner—included in your ticket price—will be served from 6 to 7 p.m.

Michael has been playing finger-style acoustic guitar for more than 40 years and has released several CDs and instructional books. He describes his acoustic solo music as “contemporary traditional; original music that reflects my interest in a number of styles of music.” Blackwell is an amazing mandolinist, and he and Michael released an awesome acoustic CD called All Dressed Up.

Tickets cost $25 presale (at the venue) or $30 at the door. Feel free to bring your own beverages. There’ll also be wine tasting and sales by Pithy Little Wine Co.

Remember that on Thursday, Nov. 11, San Francisco performer Jesse Brewster plays at The Porch at 6:30 p.m. during Steve Key’s Songwriters at Play showcase. Brewster’s sound fuses a rock/Americana style he describes as “Tom Petty and Lynyrd Skynyrd get into a bar room brawl with Neil Young and John Mayer.”

Fresh from opening for Brushfire Records recording artists Rogue Wave at the Great American Music Hall in San Francisco, alternative rock group Grand Lake will bring an intimate, acoustic performance to Steynberg Gallery on Thursday, Nov. 11, at 7:30 p.m. Their homecoming will be in support of locals Bob and Wendy, performing for the first time following a brief hiatus. Expect some mingling amongst the performers. The cover’s a scant $5.

Linnaea’s Café has become a regular stop for singer-songwriter Amy Obenski, who returns to the café on Friday, Nov. 12, for an 8 p.m. show. “I’ve been getting a really good crowd that grows every time,” she said. With lyrics that have been called “gripping” and vocals called “haunting,” Obenski shifts seamlessly between folk, jazz, and rock. She’s currently working on her fourth album.

Bev Barnett and Greg Newlon play the Música Del Río House Concerts in Atascadero on Friday, Nov. 12, at 8 p.m. “Building a stable bridge between roots Americana and contemporary folk music has really become the life’s work for Bev Barnett and Greg Newlon,” according to their press materials. “And, making sure the human heart and soul never gets lost along the way. The remarkable fit of their voices means coming along for the ride is a refreshing treat for those of us having the pleasure of their musical company.” For info and reservations, call 466-6941. Tickets cost $15 at the door, with 100 percent of the money going to the musicians. 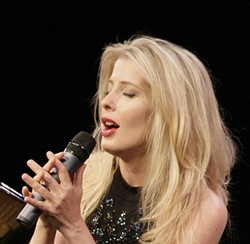 Sony Holland will bring her smooth jazz sounds to three shows this week: Friday, Nov. 12, at Rose’s Landing in Morro Bay from 6 to 9 p.m.; Sunday, Nov. 14, at Spyglass Inn in Shell Beach from 3 to 6 p.m.; then back to Rose’s Landing on Monday, Nov. 15, from 8 to 9 p.m. Mike Metheny of Radio Jazz said of the performer, “Sony Holland delivers passion and elegance through every phrase. The voice is warm, full, and engaging. Sony is becoming a favorite request from our world wide listening audience.” She is currently touring as a duo with her husband/guitarist Jerry Holland, promoting their CD Sanssouci, “a marriage of folk, Bossa Nova, jazz, and pop music.”

That Little Black Train is still rolling, this time to Painted Sky Studios for an intimate acoustic concert on Saturday, Nov. 13, at 8 p.m. ($15 tickets at Boo Boo’s, the Cambria Business Center, or by calling 927-8330). The traditional Americana band will be joined by Amaya Dempsey, an award-winning fiddler and singer from Paso Robles the band says “is certain to steal a few hearts that night.” The 11-year-old Amaya will open the show with a short set of her own, and will later join the band for a grand finale. 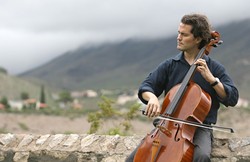 The SLO Symphony’s 50th Anniversary keeps getting better and better. Rock star cellist Zuill Bailey is their next special guest, performing on Saturday, Nov. 13, at 8 p.m. at the Christopher Cohan Center. Maestro Michael Nowak will lead the SLO Symphony and Bailey through a program that includes Ralph Vaughan Williams’ Fantasia on a Theme of Thomas Tallis, Mozart’s Symphony No. 29, and Dvorák’s Cello Concerto in B minor. Tickets range from $17 to $68. Call 756-2787. A Pre-Concert Lecture called “Symphonic Forays with Dr. Craig Russell” takes place at 7 p.m. in the Christopher Cohan Center’s Harman Hall (concert tickets required). Student rush tickets are offered at half-price in all sections after 7 p.m. at the door. There’s also a “No Ties Allowed! FREE Dress Rehearsal” at 1 p.m., open to the entire community.

The San Luis Obispo County Band will perform its 16th annual Benefit Concert for the Homeless on Sunday, Nov. 14, at 3 p.m. at Mount Carmel Lutheran Church, 1701 Frederick St., SLO. Guest saxophonist soloist and conductor David Becker will lead the band through a program called “Music From Many Places and Times,” commemorating the band’s 136th anniversary. There’s no admission charge for this concert, but a free-will donation to support the Homeless Shelter will be taken at the door.

Now in its 62nd season, the SLO County Concert Association presents Bronn & Katherine Journey on Sunday, Nov. 14, at 3 p.m. in Trinity Lutheran Church (940 Creston Road, Paso Robles). Expect heavenly harps in a performance that is “nothing short of glorious. Katherine’s radiant voice and skill on keyboard will lift you to the front row.” 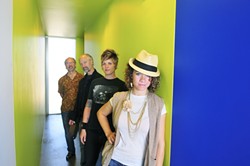 The Frog and the Peach hosts The Whitney Myer Band on Sunday, Nov. 14, at 10 p.m. The band’s something of a family affair, with Whitney backed by her father Scott Myer on guitar and uncle Fred Myer on drums. Bassist Gia Torcaso rounds out the ambitious, hard-working quartet. Twins Scott and Fred started jamming with neighborhood kids in East San Francisco Bay and soon the two ended up backing nationally touring acts such as Dave Mason and Commander Cody. In the ’90s, Scott and Fred joined The Mudsharks, a Reno-based ska band, right around the time Whitney was getting into the Mudsharks’ mosh pits. She started writing music at 13 and recorded her first album at 16. The Whitney Myer Band is currently touring in support of 23-year-old Whitney’s sophomore effort, Dream Killer.

Nebraska natives Tom Corbett and Brad Colerick will share featured billing on Tuesday, Nov. 16, at the Steynberg Gallery during Steve Key’s Songwriters at Play showcase from 6:30 to 9:30 p.m. ($5 cover). Both are now L.A.-based touring singer-songwriters with new CDs out this year. Corbett just released his third CD, Tonight I Ride; Billboard Magazine called Brad Colerick “one of a baker’s dozen of acts to watch in the folk community around the world.”

On Tuesday, Nov. 16, Daniel Park of Las Cruces, N.M., headlines the next Central Coast Songwriters showcase from 7 to 10 p.m. at The Clubhouse (all ages; no cover).

On Wednesday, Nov. 17, at the Spyglass Inn, jazz guitar playing brothers Goh and Kai Kurosawa perform during Steve Key’s Songwriters at Play showcase from 6:30 to 9:30 p.m. Known for their dynamic style and creative blending of classical, folk, rock, flamenco, and world music, the Kurosawas will be one of eight performers on the bill.

Woodstock, N.Y.-based indie folk duo Mike + Ruthy will bring their sublime acoustic sounds to the Steynberg Gallery on Wednesday, Nov. 17, at 7 p.m. ($5 cover). A few years ago, they rolled through California to support Arlo Guthrie during his 40th anniversary of Alice’s Restaurant tour with their band, the folk-rock act The Mammals. They also supported Pete Seeger at the Monterey Jazz Festival last summer. This time around, they’re here to share their “memorable new songs at eight intimate live shows from Encinitas to San Francisco,” supporting their new album Million to One, which was called “an infectious new folk-rock album” by the Boston Globe. They’ll have two guitars, a banjo, a fiddle, and a ukulele in tow. “In this fast-paced, technological world, we get excited about a room full of people who are there to share an intimate acoustic concert,” Mike said.

KCPR is a real rarity, a college radio station run by students, playing music most commercial stations wouldn’t touch with a 10-foot-needle, if they still had turntables, which most don’t—but KCPR does. It’s a station where you’ll hear live DJs putting together music for you on the spot, music they pick instead of pre-recorded shows put together by some corporate board. Yep, KCPR is special, something to be nurtured and protected and supported. So here’s your chance.

KCPR 91.3 FM will be holding its 40th annual fundraising auction Monday, Nov. 15, through Friday, Nov. 19, 10 a.m. to 5 p.m. Listeners are encouraged to call in to bid on auction packages made up of various merchandise donated by local businesses in SLO and Santa Barbara counties.