'Missing Link' is cute but not especially memorable

Writer-director Chris Butler (ParaNorman) helms this stop-motion animated adventure about Sir Lionel Frost (voiced by Hugh Jackman), who's invited to the Pacific Northwest by Sasquatch—aka Mr. Link (voiced by Zach Galifianakis)—who hopes Frost will take him to the Himalayas to meet his long-lost relatives, the Yetis. With free-spirited adventurer Adelina Fortnight (voiced by Zoe Saldana), the trio sets out to find Shangri La. (95 min.) 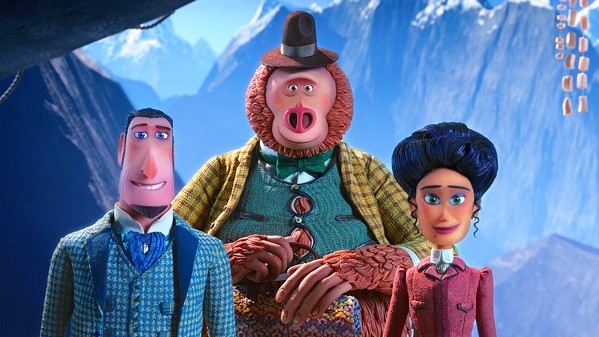 Glen I was really hoping for stop-motion animation along the lines of Wes Anderson's Fantastic Mr. Fox and Isle of Dogs, Duke Johnson and Charlie Kaufman's Anomalisa, or even Tim Burton's Corpse Bride and Frankenweenie, but instead this seems to be a mix of stop-motion and green screen CGI. It's still undeniably visually arresting, but it's not nearly as quaint and charming as the previously mentioned films. Frost, a cryptozoologist desperate to be accepted into a men's club led by Lord Piggot-Dunceby (Stephen Fry), keeps trying to find evidence of various mythical creatures. The film opens with his search for the Loch Ness Monster. Unfortunately, even though he discovers the creatures, coming back with irrefutable proof is difficult. Piggot-Dunceby and the other members reject him and go one step further. They send henchman Willard Stenk (Timothy Olyphant) after Frost to thwart his Himalayan expedition. What follows is the trio's misadventures and Stenk's relentless pursuit. There's some bad blood between Frost and Adelina Fortnight so part of the story is about their reconciliation, which frankly happens too easily to have any resonance. Most of the film's humor is courtesy of Galifianakis' Mr. Link, a literalist who must learn to understand Frost's bone-dry sarcasm. The whole thing is cute enough, and the various creatures learn their valuable lessons, but I was a bit underwhelmed.

Anna It certainly had its charms but didn't quite hit the spot like the various other films you mentioned. The set-up and story are simple enough, and as with most animated flicks, the real meat comes from the voice work. Missing Link undeniably has some great talent behind it—Galifianakis as Mr. Link is endearing in that sort of lost puppy way, and Jackman plays a self-involved dude with an ego to boot, but not so lost in himself that he can't be redeemed. Fry pulls off the bad guy, down to the dastardly mustache, and Emma Thompson gets her evil queen persona practically perfect as the Yeti elder. It's definitely aimed at kids, and while of course that is expected in an animated feature, I do relish when the humor plays to both the intended audience and the people tasked with watching them. After all, you can't send young kids off to the movies alone, so why not spice it up enough that the parents can enjoy it as well? Mr. Link, or Susan as he prefers to be called, is alone in the woods when Frost first encounters him, and instead of being a brutish monster, he's just a pretty normal guy in search of others like him. He wants help searching for his family members, which he believes are the Yetis that live in the mythical Shangri La, and the trek to get there makes up most of the adventure. Ultimately, it's a film whose message is to recognize and appreciate the love and friendship that was around you all along, and that sometimes a dream chased ends up being anything but what you thought it would. It's got a lot of cuteness and there's a laugh here and there, but it's not going to get logged anywhere in my brain but as a kids' movie, and not the best out there.

Glen It certainly feels like the film's messages are overly obvious and telegraphed. Frost thinks of Mr. Link as a bumpkin unworthy of his respect and nowhere near his equal. Want to guess if that changes? Frost also thinks Piggot-Dunceby and the other "great men" of his club will give him prestige and credibility. But they—not Mr. Link—turn out to be the knuckle-draggers trapped in the past and fearful of the future. Frost thinks Fortnight needs a man like him but soon learns she doesn't need anything or anyone because she's self-reliant. Mr. Link thinks he needs to be with his Yeti brethren, but they reject him as being foreign and different. He learns he must find his own family through his friendships with others. These are all great messages for kids, but they lack nuance. Should you bring your children to see this? Sure, spring for the matinee so you can see it on the big screen. Just don't expect to feel delightfully entertained yourself. I nearly dozed off a few times.

Anna Neither of us is huge on animated films, though I do hold a lot of warm nostalgic feelings for some in particular. We do both really like stop-motion animation stuff, and apparently at the end of the credits there is a behind-the-scenes clip about how this film and its characters were made. We didn't stay for that. I did, however, find a video on YouTube that talked about this film, the studio, and techniques that were used and combined. As suspected, this film employs stop-motion animation, CGI, and 3D rendering to create its effects. Honestly, that behind-the-scenes stuff was pretty fascinating. I'd probably watch that again over the film! There's a lot to like about Missing Link, but I can't help but feel like there was still something ... well, missing. The character is funny and lovable, and there's no shortage of adventure, but I suspect this is one the kids will enjoy and adults will soon forget. Make it a matinee or wait for this to show up on your kids' radar for home viewing. Δ