Noemi Garcia could only talk for a moment. The Route 10, southbound, was due, and the Cal Poly student knew that if she didn’t board early for her commute to Nipomo, there might not be a seat. 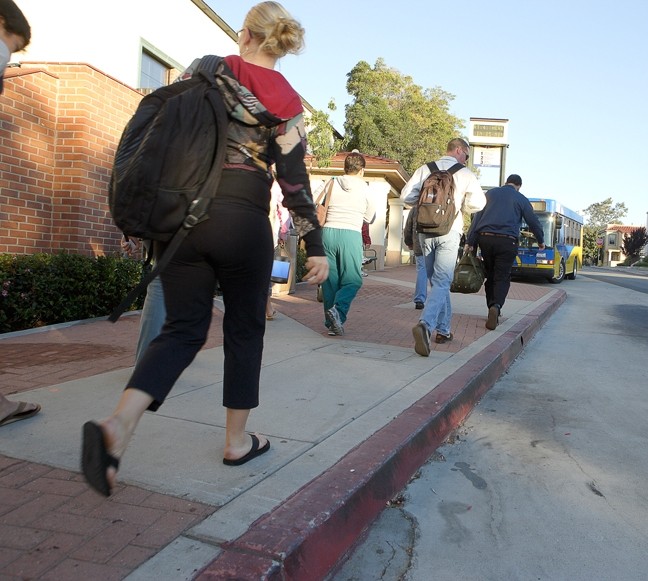 “It seems like every time I board, there are more people,” she said.

It’s an experience Shannon Tell has had as well. The 21-year-old said he’s encountered busses so crowded on that same route, between Santa Maria and San Luis Obispo, that he’s been flat left behind at stops lately.

“The service here hasn’t been too good,” said Tell, who said he’s used to far more convenient, and less crowded, service in the Bay Area.

Unfortunately, the local bus experience isn’t likely to get better any time soon.

Ed King, transit manager for the SLO Regional Transit Authority, said ridership is setting records at a time when funding is disappearing and costs are soaring. He noted ridership has risen about 26 percent since the year before.

“And fares haven’t come close to keeping up,” he said.

At the RTA, King said, they are considering fare increases that would take the base fare from $1 to $1.25. That would be the first increase since 2000. The system is also looking to simplify its complicated fare structure and reduce the number of passes offered.

Even those changes won’t come close to covering increasing costs, which have risen 20 percent in a year. It’s perhaps ironic, King noted, that the problems come from exactly the scenario the RTA has tried for years to accomplish: increased riders.

San Luis Obispo’s situation is a reflection of nationwide trends. Nationally, bus ridership is on track to make all-time records, and 85 percent of all public transportation agencies report that at least some of their routes are full. Forty percent say they are turning away new riders.

According to the American Public Transportation Association, bus ridership in mid-sized areas such as San Luis Obispo County spiked 14 percent in the last quarter, as compared to the year before.

That’s far higher than in the nation as a whole, where ridership increased 5.1 percent. Experts say the difference reflects the fact that people in urban areas are already accustomed to mass transit, while people in less populated centers only seek out alternatives when factors such as high gas prices drive them to them.

That national survey found that half of all public transportation agencies are adding service to meet the surging demand, but King said that’s not an option locally.

“We’re at the limit where we can’t put out any more busses because we don’t have the funds to operate the service,” he said.

Students at Cuesta College noted how crowded the busses were when school opened this summer. The student newspaper the Cuestonian highlighted the issue in a recent front-page article. At Cuesta, students say they’re routinely finding busses full past capacity, despite a subsidy the college pays RTA for service.

King said the addition of Cal Poly students has only made matters worse. In the City of San Luis Obispo, which operates its own system, things aren’t quite as dire, but folks are still feeling a pinch.

Transit Manager John Webster noted that service around Cal Poly, which subsidizes routes on the campus, is sometimes maxed out, and there are few options for increasing service there. The system is also suffering from increasing fuel costs and more people are riding the bus, he noted. But he said it’s far from a crisis situation in the city.