The first cover story I ever wrote for New Times was about Santa Barbara wunderkinds Toad the Wet Sprocket, a band whose first self-produced album, Bread & Circuses, quickly gained major label attention and launched the band into the stratosphere, where they hovered for awhile before falling back to Earth and sort of disappearing.

Then editor Todd Kleffman and I drove down to Santa Barbara, where we met the band at Dean Dinning’s house. Well, actually it was his parents’ house, which is where he lived at the time, and the interview was conducted in the basement. They were all just kids on the verge of a great adventure.

That was about 20 years ago, and now Dinning, Randy Guss, Todd Nichols, and Glen Phillips have reformed and are playing a series of West Coast dates before heading to Texas and then the East Coast.

According to Dinning in the band’s press materials, people like you are what got the band back together: “We’ve taken time off and are all active writing and recording in various projects, but our fans are what bring us back together.”

This Sunday, March 14, when they play Downtown Brew (7 p.m.; 21-and-older) with opening act Truth About Seafood, I suspect local fans will be singing along to the band’s old hits: “All I Want,” “Walk On The Ocean,” “Fall Down,” “Good Intentions,” and “Something’s Always Wrong”—all tracks heard in such films, TV shows, and commercials as Friends, I Know What You Did Last Summer, Empire Records, So I Married an Axe Murderer, Scrubs, Cold Case, Dawson’s Creek, My So Called Life, Party of Five, and Buffy the Vampire Slayer.
On Wednesday, March 17, Downtown Brew will host a St. Patrick’s Day party with Mystic Roots (6 a.m., and yes, you read that right; 21-and-older; absolutely free). Start your celebration off with a green dose of reggae, hip-hop, and dancehall riddems. 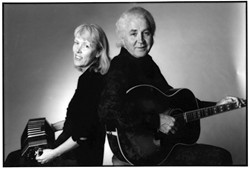 Fans of National Public Radio’s All Things Considered will no doubt remember Steve and Cindy. He’s a gifted and highly sought after songwriter, and she’s got a simply stunning voice, making them a perfectly complimentary pair.

Orville and Mark are billed as the Kings of Mongrel Folk, who rule “a vast domain populated by folk, blues, country, jazz, and nameless but intriguing musical forms that only they can bring to life.” Mixing harmonica, guitar, and dobro with soulful singing and witty songwriting, these two inject fun in everything they do. 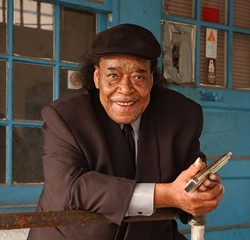 When blues fans think harmonica, the first name that comes to mind is usually James “Superharp” Cotton, the Grammy Award-winning musician who was inducted into the Blues Hall of Fame in 2006, the Smithsonian Institute in 1991, and won countless W.C. Handy Blues Awards over his long and venerated career.

Orphaned at 9, Cotton was raised in Mississippi by his mentor Sonny Boy Williamson, another famous blues harp player known for his innovative Delta Blues harmonica style.

“I just watched the things he’d do, because I wanted to be just like him. Anything he played, I played it,” recalled Cotton, who was discovered by Muddy Waters in 1954, who took him from Arkansas to Chicago, where he played with Waters for a dozen years.

Cotton formed his band in 1966, crossed over into the rock arena, and played with the greatest bands of the classic rock generation. 2009 marked Cotton’s 65th year in the entertainment business!

“My audience always tells me how I’m doing. If I look out there and don’t like what I see, I work harder,” he said.

“Well, since pissing off everyone in town—actually before pissing off everyone in town—Bad Assets decided to leave town for a few weeks and go on a Southern tour,” said Shea. “We’re leaving March 16 and returning April 6 after hitting Phoenix, El Paso, San Antonio, Austin, Granbury, Dallas, Houston, New Orleans, Biloxi, Memphis, and a few other small towns in the south. I really want to go to Graceland and see if I can channel Elvis.

“Because Joe, Jon, or myself might piss Southerners off and we might get lynched or shot, people should come to our tour kickoff show on Saturday, March 13 at Sweet Springs and wish us good luck. The show starts at 9:30 p.m. and it’s a $5 cover. We’re having a rock’n’roll auction and debuting material from our recently recorded second album.”

Deathbear will open the show for Shea and the rest of Bad Assets.

“Shoot, who knows? If it was anything like our last Frog and Peach show, we might only play two songs before getting unplugged,” added Shea. “Whatever happens, it’s going to be a night to witness. We are loud, we sweat, we move around a bunch, we engage the crowd, and we aren’t afraid of rock’n’roll.

Ricky Skaggs once said, “The cycle comes back around, if you can stand still.” While Skaggs has hardly stood still during his nearly 40 year career, the cycle has indeed returned as the country star has returned to his bluegrass roots.

Skaggs became a superstar in the early ‘80s at the height of the Urban Cowboy craze, but instead of riding that trend, he took a more traditional route, updating classics such as Flatt & Scruggs’ “Crying My Heart Out Over You,” Webb Piece and Cindy Walker’s “I Don’t Care,” Mel Tillis’ “Honey/Open the Door,” and Bill Monroe’s “Uncle Pen.”

The twelve-time Grammy Award-winner is affectionately known today as “bluegrass music’s official ambassador,” which makes sense when you recall that in 1971, Skaggs and the late country singer Keith Whitley were invited to join the band of bluegrass patriarch Ralph Stanley. Later Skaggs joined J.D. Crowe & the New South, performing on the band’s 1975 debut album, which is widely regarded as one of the most influential bluegrass albums ever made.

“This group of guys meets my approval every night,” Skaggs said.  “Each and every one of the pickers in Kentucky Thunder totally amazes me in every show.”

Native Lounge & Tolosa Wine Clique continue their “Native Unplugged” series, a weekly event where they showcase the best local bands in an intimate dining setting every Thursday at Native Lounge. Happy hour runs from 5 to 7 p.m., with live music 7 to 9:30 p.m. Admission is free but dinner reservations are recommended. See The JD Project on Thursday, March 11, and Avanti on Thursday, March 18.

The Pour House in Paso has a great blues show coming up this Friday, March 12 when The Nathan James Trio and The Bluz Dogz bring the heat. 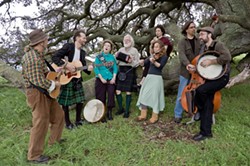 Hear Hear The Darlins Roar this Saturday, March 13 during a pre-St. Patrick’s Day party from 7 to 10:30 p.m. at Arroyo Grande’s SLO Down Pub. This local favorite will deliver driving jigs and reels and songs of life and love in the Celtic lands, and they’ll be joined by world champion step dancers from the Claddagh Dance Company.

Red Eye Junction is fixin’ to drop a heapin’ cowpie of countrified love on Creekside Brewing this Saturday, March 13 with opening act Split Rail (9:30 p.m.; 21-and-older; free). “It’s been a rough week (or two),” revealed Reid Cain, Red Eye’s frontman. “We have a new guitar player, Mr. Riley Allen, Wyatt Lund (of Siko) on drums for the time being as Curtis quit when we got back from tour because his girlfriend doesn’t think he should be in a band, and our forthcoming album is on hold because we are fucking broke. We just came back from a tour from the Pacific North West and did well. We’ll be playing a ton of new material that hopefully shows up on an album at sometime in the future.”

Pianist Jon Mayer plays the next Famous Jazz Artist Series concert at the Hamlet in Cambria this Sunday, March 14 (4 p.m. for $15; 7:15 p.m. for $12; or see both for $20; call 927-0567). Mayer recently released Nightscape, which climbed to #3 on the national jazz charts. He plays with Freddy Hubbard, Jackie McClean, Lou Donaldson, Dexter Gordon, and many more. Bassist Luther Hughes and drummer Paul Kreibich, as well as series co-producers Charlie and Sandi Shoemake, will join the fun.

Up-and-coming Seattle songwriter Anna Coogan will release her first record since 2007—and her first as a solo artist—on Sunday, March 14 at Linnaea’s Café at 7 p.m. She’ll also perform at the “Songwriters at Play” series at Senor Sanchos
on Monday, March 15,
at 5:30 p.m. 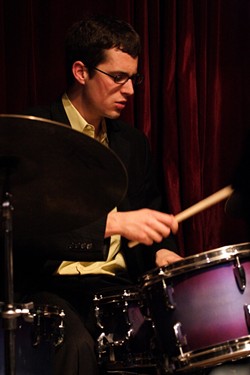 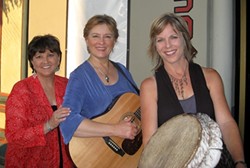 Women on the Move (Joan Enguita, Linda Geleris, and Trish Lester), a trio of Los Angeles area singer/songwriters, play Tuesday, March 16 at the Oak Creek Commons in Paso Robles (7 p.m.; $10 to $20; 239-9906). The group is traveling through the area on a Los Angeles to Portland tour, bringing their original folk, country, and pop songs of love, laughter, and hope.

Traditional Celtic act Altan will be at the Clark Center next Thursday, March 18 (call 489-9444 for tickets). Formed in County Donegal by singer/fiddler Mairéad Ni Mhaonaigh and the late Frankie Kennedy, Altan celebrates its 25th anniversary this year with the release of Altan: 25th Anniversary Celebration (Compass Records), a mix of the band’s favorite songs from over the last quarter century.

“I submitted a proposal to the Citizens’ Stamp Advisory Committee that was accepted to have a series of first class postage stamps on the vinyl record theme,” explained Gary. “The purpose is to raise awareness that only 5% of all recordings have been transferred to digital format, leaving countless historical recordings, peripheral artists, and all kinds of stuff only available on vinyl. The goal is this is our audio history, and like the written word of past eras, it needs to be preserved for future generations.”

Visit vinylrecordday.org/stamp_petition.php to sign an electronic petition to help get the ball rolling.

“In this first week, about 109 signatures have been acquired, one from Croatia, another from France,” said Gary. “Since Vinyl Record Day is SLO-based, I wanted to let you know. We can make a difference in preserving audio history.”


Glen Starkey, unlike Barbra Streisand, doesn’t have a good side. Lament his bad fortune at gstarkey@newtimesslo.com

Dum Dum Girls—I Will Be

The golden California garage sound of hazy guitars and lo-fi production blossomed in the electrified chords of dozens of ‘50s surf rock outfits and filled the spacious vocal pop of Phil Spector’s girl groups. But the sound of yesterday is being revived up and down the west coast, from the messy charm of San Diego’s Wavves to the cassette tape aesthetics, sun-saturated melodies of San Francisco’s Girls. The ladies of Los Angeles-based Dum Dum Girls continue fueling our consumption of rock’n’roll stripped of any bloat, combining a sound that touches on the early punk-fire of Blondie and the infectious rhythm and bang of the Go-Gos. “Jail La La” drenches layers of reverb on everything, yet can’t sink the insistent beat or the la-la harmonies from inflating this balloon to sugary pop. The sound of Deborah Harry is instant on “Oh Mein Me,” with the shimmering closing ballad “Baby Don’t Go” offering the same gentle hallucination that makes “Crimson And Clover” adored. Eleven songs clocking in at thirty minutes, and they didn’t miss a beat.

Jon Spencer is due for a revival. With the Blues Explosion, he hoisted the flag of rock being a primitive art form, and this was all before the White Stripes. For Spencer, American rock’n’roll never escaped the juke joints or the backwater farms, where Muddy Waters harnessed his MOJO, which the Rolling Stones spent a career trying to emulate. The Blues Explosion is a homage to the first ripple in the giant pond of rock, with the initial crest being the purest representation of the electrified rawness of Howling Wolf and Muddy. On this retrospective, it opens perfectly with “Chicken Dog,” as the legendary Rufus Thomas chicken clucks, barks, and screeches through the entire blues stomp. “Love Ain’t On The Run” brings in the booming baritone of Calvin Johnson for a sauntering ditty, and “Shake ‘Em On Down” revisits Spencer’s assistance to the last of the bluesmen, R.L. Burnside. Funky, swampy, dirty and raw, this is essential rock’n’roll.