After opening an office in Santa Maria in 2019, the Mixteco Indígena Community Organizing Project (MICOP) quickly became a fixture in northern Santa Barbara County communities, particularly known for its translation and outreach services that helped get critical information to local residents during the pandemic.

This year, as the organization starts to expand its efforts into San Luis Obispo County, MICOP celebrates its 20th anniversary. 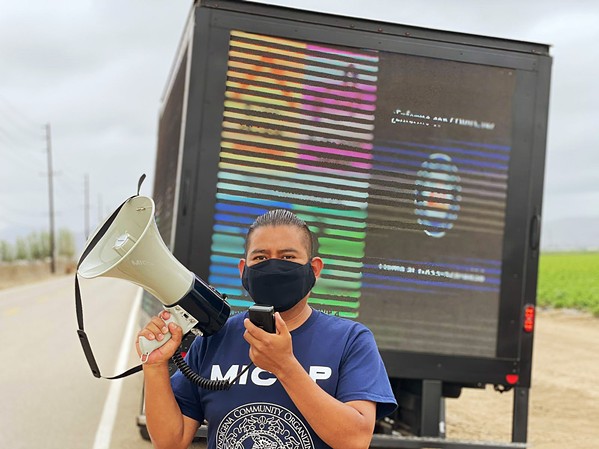 "It started in 2001, very small, by one person: Family Nurse Practitioner Sandra Young," MICOP Executive Director Arcenio Lopez said. "The reason why she started it is because she noticed that a lot of her patients, they were not able to communicate either in Spanish or English, so she identified many of them being from the Mixteco community."

Young advocated for a Mixteco interpreter to be hired at her clinic, and they brought someone on part time at first.

"Soon they realized that there were so many Mixteco patients that they made the interpreter full time," Lopez said. "On the side, outside [Young's] work, she started inviting people to these monthly community gatherings where they were distributing information and basic necessities for families."

"They started with direct services. It was pretty hard to ignore the immediate needs of our communities," Lopez said. "But at the same time, they recognized that there were social issues, and there was a need to create this other arm about advocacy and community organizing, and looking to create long-lasting, systematic change."

In 20 years, MICOP went from "a tiny organization, a small budget, no offices," to now having dozens of employees and multiple offices—two in Ventura County, two in Santa Barbara County—and a recent community outreach position added in Paso Robles.

"We have an Indigenous Advisory Committee, mainly leaders from indigenous communities, giving guidance to the [MICOP] board of directors on what is needed. Based on that, we started many different programs," Lopez said.

This includes interpretation services, a radio station called Radio Indígena, a youth group, a scholarship program, and more. These programs became acutely important during the pandemic, as MICOP is the only organization working with and for indigenous migrant communities, Lopez said.

"All these years being present, working with communities ... there was already a trust established with communities," Lopez said. "We started doing Facebook Live, started using Radio Indígena. We never imagined that Radio Indígena would be such a crucial tool during this moment. This pandemic forced us to be in these virtual platforms."

Radio Indígena already was a trusted source of information within local indigenous migrant communities, particularly among farmworkers, Lopez said, making it an important tool to reach those people with COVID-19 information.

"When they're working, they're always carrying a radio and listening to radios, so that just became so handy during the pandemic," he said.

MICOP was also one of 12 organizations to partner with the state for the Disaster Relief Assistance for Immigrants project, which provided one-time assistance to undocumented adults who weren't eligible for other types of aid.

As the organization looks to the future, it's hoping to expand.

"People from San Luis Obispo were traveling to [MICOP's] Santa Maria office because they started hearing about the organization and they wanted to be able to get that support," Lopez said.

In partnership with the Labor and Workforce Development Agency's statewide COVID-19 workplace outreach campaign, MICOP was able to add a community outreach position in SLO County, based in Paso Robles, earlier this year.

"We pushed for this vision and said, 'Why not [the whole] Central Coast?'" Lopez said. "So that's our new vision, mission statement: To support, organize, and empower indigenous, migrant communities in California's Central Coast. ... We're already looking into expanding to San Luis Obispo, and that's probably the next step."

• The Agrarian Hotel in Arroyo Grande was awarded LEED (Leadership in Energy and Environmental Design) Silver, according the South County Chambers of Commerce—it's the first new construction project in the city to earn the certification from the U.S. Green Building Council. Visit agrarianhotel.com for more information. Δ

Staff Writer Malea Martin can be reached at mmartin@newtimesslo.com.