Support the SoulCycle dream by visiting the Indiegogo crowdfunding site and searching "SoulCycle." From there, you can learn more about the project, backing rewards, and pledge a donation. You can also email Gil at djmanogil@gmail.com.

Hold any vinyl record in your hand—say, James Brown's 1963 release Live at the Apollo—and you'll see visible grooves in the shiny surface. When a needle hits those peaks and valleys at 33 1/3 RPM, a beautiful thing happens. A warm, rich sound suddenly blares to life, with all its delicious imperfections and pops. 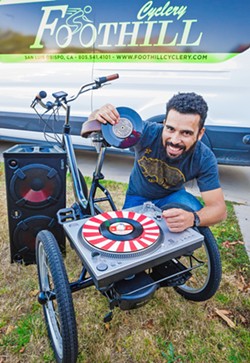 Not unlike the crackling of a campfire, a good vinyl record has the ability to bring humans closer together, both on the dance floor and in the living room.

This is exactly why SLO DJ Gil Braga (aka DJ Mano Gil) fell in love with records in the fist place. Now, the Brazilian-born world music buff wants to take the fascination one step further. His unique Indiegogo campaign asks friends and neighbors: "Could a mobile DJ experience help to create more community in SLO's underutilized outdoor public spaces?"

According to Braga, SLO Mayor Heidi Harmon and key members of the city Parks and Recreation Department have already answered with a resounding, "Yes."

Enter SoulCycle, a customized electric tricycle fitted with a mobile DJ setup: two turntables, mixer, and speakers—plus a handy umbrella to keep harsh sun off the fragile hunks of wax. Braga's crowd funding campaign—which asks for $4,700—will end on Aug. 22, and as of mid-July, stood at nearly 30 percent of the flexible goal.

Thanks to the initial surge in support, the local teacher has already been able to obtain the project's most expensive item, a $2,600 E3 CO electric tricycle from SoCal company IZIP. With help from partner and Foothill Cyclery owner Josh Cohen, the machinery will receive a full custom overhaul inspired by Montreal-based TupiCollective. Thanks to a 350 watt motor and a 48v lithium battery, the mobile DJ unit will have the ability to zip all across bike-friendly SLO, stopping at parks, sidewalks, and other community spaces.

"San Luis Obispo is one of the most bike friendly cities in America, with several public spaces that are not always used to their full potential at times," Braga explained on his Indiegogo page. "This project aims to provide an extra bit of diversity to our already vibrant music scene by bringing music to where people are. We expect the impact to be almost immediate. People of all ages and social walks will be able to congregate, meet new friends, build new community relationships, and share the public spaces in a healthy and rich way."

In other words, this isn't a pretentious operation reserved only for the vinyl collecting set.

Braga fondly remembers growing up in urban Brazil and enjoying the shared community of public spaces. All walks of life and age groups would mingle outside in parks and on promenades, where pickup soccer games were plenty and conversation surged. If Braga wasn't kicking a soccer ball, he was usually on his bicycle waving as he went.

"Everybody knew me as the kid being raised by his grandparents, and I always had this sense of community, even in a big city. I always liked cities—the mobility, the proximity with neighbors. As a kid, I was really into world cultures and, at 13, started studying English on my own," Braga said.

Obsessed with Michael Jordan and the Chicago Bulls, Braga resolved to someday come to America (thanks to a YMCA exchange program, he made his first visit in 1995 at the age of 19). This love affair with the U.S. continued, and Braga moved to SLO in 2009 after spending a few years in LA. He now considers himself both a SLOcal and a "citizen of the world."

"The more we know our neighbors, the more we can understand and appreciate each other. Music can help create those bridges and strengthen the community as a whole," the DJ said.

The records Braga spins are a direct reflection of this ethos. You won't hear Top 40 radio hits, but you may hear some Brazilian bossa nova or French yé-yé. The volume and the selection of songs planned for the SoulCycle experience will change depending on the mood and environment, ranging from jazz, soul, salsa, and other family friendly rhythms.

As a father, soccer coach, teacher, and music lover, Braga said he aims to do his part to keep SLO vibrant for future generations. Indiegogo backing prizes include stickers, T-shirts, and tickets to a special launch party, but what SLO residents really stand to win is bigger than all that.

"Every time I DJ, and somebody comes to me and asks me a question, I get excited," Braga said. "I like to spread knowledge, and I feel like music is knowledge. When you become interested in music from somewhere else, you become interested in that culture as well. If I'm spreading different types of music, I am also giving that person an opportunity to become richer culturally." Δ

Hayley Thomas Cain is dusting off her records and throwing a listening party with her neighbors. She can be reached at hthomas@newtimesslo.com.