Mohamad Hafez's Retrospective will show at the Harold J. Miossi Art Gallery at Cuesta College until Dec. 20. The gallery is open weekdays, 11 a.m. to 4 p.m., and until 7 p.m. on Thursdays.

For architect and artist Mohamad Hafez, attracting media attention is not always a joyous experience. That's because many of his sculptural pieces tell a sobering story: the destruction of his homeland in the Syrian Civil War.

"The work has gained that attention, so any press or high-traffic media that comes with it is always a bittersweet feeling," Hafez told New Times.

But Hafez says that his work goes beyond the sentence or two that media outlets often boil him down to. It's something far more complex and nuanced than just a headline of hopeless destruction. 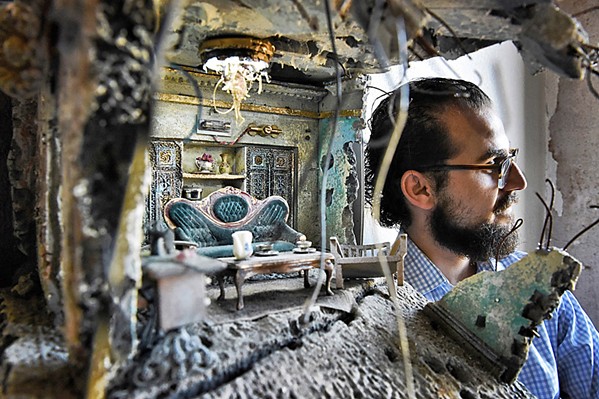 "It's not all about Syria but our common humanity: How can we all connect with each other?" Hafez said. "I think part of it is that our attention span has gotten so short. People want to understand you in two seconds. We're human beings: We're complicated creatures with so much baggage and history."

Hafez's exhibit—currently on display at the Harold J. Miossi Art Gallery at Cuesta College—features pieces from the last 20 years of his work. Most of Hafez's work is done in series: a group of pieces that are cohesive in some way. Each piece in his Facades Series, for example, is a miniature mixed-media plaster façade that depicts the front of a building inspired by Hafez's home, Damascus, Syria. Hafez picked out just three from that series to display in his Cuesta exhibit, resulting in what he calls a "snippet" of the bigger picture.

These representatives of Hafez's various series come together to form the appropriately titled exhibit, Retrospective.

While Hafez now finds himself moving closer to full-time devotion to his art, he was originally trained as an architect. After experiencing "homesickness and nostalgia" for his home while studying toward his architecture degree in the United States, Hafez decided to try art as a way to cope.

"My way of connecting to my roots and my homeland was through really diving into detailed, miniature works of the land," he said.

In addition to the smaller works, the exhibit also features surreal metal sculptures made of found objects, a handful of pieces that work with suitcases, and a boat installation in the center of the space called Desperate Cargo.

"This boat here, it used to hang upside down from the ceiling, fully inflated," Hafez said of the large centerpiece. "For this time around we couldn't hang it, so ... we actually worked with the students here to make this installation. There were about 20 students that were bringing sand- and sea-found objects."

The result is a partially deflated boat surrounded by strewn-about orange life vests that are covered in sand and ocean debris. The boat is filled with a metal sculpture that is reminiscent of pieces on the walls, creating a sense of cohesion despite how much the piece sticks out. The installation is a poignant reminder of the Syrian refugee crisis, and its placement in the center of the gallery forces the audience to remember its presence as they view the other pieces. It commands immediate and sustained attention.

Much of Hafez's work is architectural in nature. Even pieces that lean toward abstraction are grounded in reality by ties to the intimate spaces that all humans can relate to. They feature every last element of a lived space, from electrical wires to intricate details that line the miniature walls.

Yet Hafez says the influence goes both directions—his artistic brain makes him think differently about the actual living spaces he designs.

"A kid might have a special relationship with their window [seat] back home because it was deep enough for them to crawl up in there and sit on a sunny day in the winter and build memories," Hafez gave as an example. "It might not be the cheapest thing to do, but to build up a wall that's 2 feet thick for a kid to crawl up in and play with their Legos—that is highly influenced by my art world, and my experiences with people coming to me and saying, 'Your art reminds me of my childhood.'"

Finding the common humanity among his audience and connecting with people from different walks of life is the most fulfilling feeling, Hafez said.

Hafez said he hopes his work can counter that narrative by asking his audience to consider the America they want to raise the next generation in.

"Is it a nation of division, xenophobia, us versus them?" he asked. "Or is it an inclusive society?" Δ