Mohammed has the goat

“Don’t eat Kochi cheese. Don’t eat cheese made by the nomads,” photographer Gloriann Liu concludes one of the countless tales she acquired in Afghanistan. It’s one of her more humorous narratives, perhaps because in a country that has seen more than three decades of brutal, relentless war the enemy in this story is unpasteurized coagulated milk. 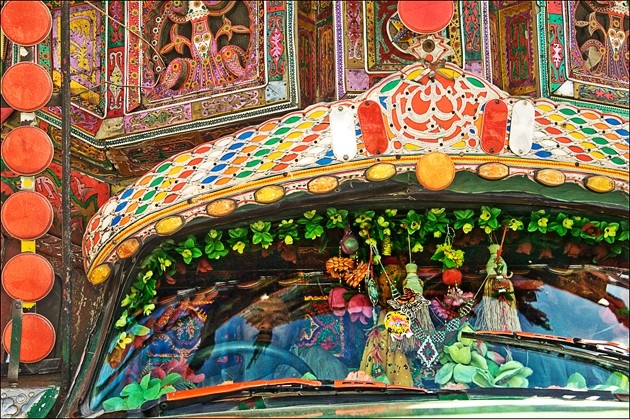 Her first expedition to Afghanistan took place in 2003, and she would return a dozen times in the years that followed, also exploring Jordan, Dubai, Gaza, Yemen, Egypt, Syria, and Iraq. Each city or village was a window into a world utterly unlike the one she inhabited in San Luis Obispo, but it was the generosity and warmth of the Afghani people that truly captured her heart, and camera.

“I had a glimpse of a world that I had very little understanding of,” she said. “You can read. You can take courses. But until you actually meet people you don’t know what they are.”

As she busies herself with preparations for her approaching exhibit, Afghan Perspectives, on display at Big Sky Cafe through Nov. 12 and at the Art Center from Oct. 15 through Nov. 30, it’s clear that Liu would prefer to be in Afghanistan. As it stands, she plans to return at the end of February, and will spend the interim organizing and printing five years’ worth of photos and creating a portfolio.

Her first visit to the Middle East was in 2001, a few months before the Twin Towers were destroyed. As security, terror alerts, and fear have come to dominate the West’s perception of Islamic countries, Liu’s experiences and photographs afford a different portrait altogether of the Muslim and Arab world. She talks about strangers inviting her into their homes, families that would offer her their the last scrap of food.

Still, she can’t always escape the implications of recent political events. In order to visit Afghanistan would-be travelers must first receive a letter of invitation, something she first acquired from Global Exchange. A guide, translator, and general jack-of-all-trades—Najbullah—accompanies her during her expeditions, scouting neighborhoods where she might be shooting to ensure that they are safe. And in Baghdad she was accompanied by an armed guard, a necessity that is no longer affordable at $3,000 per day. In Afghanistan Liu conveys her respect for local culture by wearing a headscarf and dressing modestly, insisting that crossing the cultural barrier is “just a matter of total respect and communication.” But the fact that she doesn’t wear a dress places her on the edge of propriety.

“There’s no way to shoot in a dress,” she explains her decision. “I’m on the ground. I’m climbing fences. I’m always dirty because I’ve been rolling around in the dirt.”

Life in Afghanistan is a complex mesh of poverty and joy and hardship, and Liu somehow communicates all of these elements, sometimes in a single photograph. Pointing to an image of a screaming, bloody newborn curled into a metal pan, Liu narrates, “This is how life starts in Afghanistan.” She chases this photograph with a story about the birth of a girl, a baby immediately displayed to her older brothers who were told that she could be exchanged for a wife. Then relates that she had heard of a girl in Afghanistan being traded for a dog.

“These are things that are there,” she says, matter-of-factly.

As Liu travels across Afghanistan, she isn’t simply snapping photographs she’s plucking out the complicated plot lines from this land, a world of people who are like and unlike her. For one week she accompanied social workers who operate on behalf of a clinic for drug addicted women. She learned that opium in Afghanistan is cheaper than food or medicine, prompting mothers to feed it to their children when they can’t afford anything else. And she cites a statistic—gleaned from one of the social workers—that there are villages with a 90 percent addiction rate.

Kite makers and buzkashi (a sport)—both activities suppressed during the Taliban’s reign—appear in her work, the click of her shutter preserving rather than halting the erratic trajectory of the kite and the confusion of dozens of players on horseback fighting for possession of a headless goat.

“Afghanistan works for me,” Liu said, gesturing to a photo of a buzkashi caller, crazed, with a blue feather wig on his head. “This guy—what a riot! He’ll run around with his wig and he’ll say ‘Mohammed has the goat!’ Or ‘Mossad had the goat.’”

At Cafe Kabul Liu was charmed by the way soda cans were stacked across the shelves, not unlike a pop art installation. Flamboyant Pakistani buses, larger and more elaborate than the art cars that race across the desert at Burning Man, return Afghan refugees to their native country.

Of course, not all of Liu’s photographs bear the promise of a happy ending. One of the images that won’t appear in the exhibits is a portrait of a 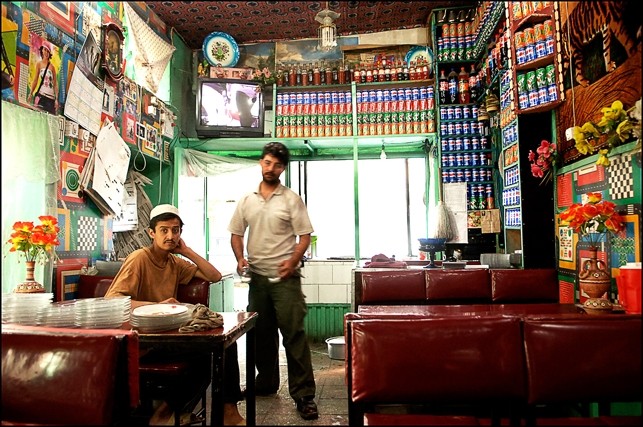 mother and daughter, two sets of eyes piercing the camera. The pair are Iraqi refugees and the mother is afflicted with multiple sclerosis. With no father and aged grandparents, the daughter—a mere child—will likely become a prostitute to support herself after her mother dies.

Liu may not appreciate being landlocked during her exhibits, but it has afforded her the opportunity to take stock of her last five years’ worth of work. However many times she visits Afghanistan, Liu will always strive for artistic growth as a photographer, and right now that means refining the focus of her work.

“There’s always been some kind of mystique in my mind about Afghanistan,” Liu mused. “I had to come this far to get away from the West, to really see something different. I think I was motivated by that sense of adventure to keep learning and explore something new. And I found it. There’s a lot of tribal traditions that do need to be changed but the commonness of need and the commonness of who we are is not about being an American but about being a human being.”