Handcrafted beers are rising to the top of pint glasses across the nation—and the Central Coast is no exception. Nowadays, it seems there’s a microbrewery in every town. 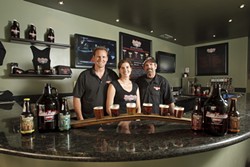 Arroyo Grande’s Tim and Melissa Moscardi, however, brought something new to the local beer scene when they recently opened Pismo Beach Brewing Company. With a shop located stumbling distance from the Pismo Beach Pier at 361 Pomeroy Ave., the Mosacardis understand a large part of their clientele is Valley Folk.

“We have a lot of customers from Bakersfield and Fresno, and when I say microbrew, we hear a lot of, ‘We don’t like those kinds of beers,’” said Tim, noting a heavy demand for light beers such as Budweiser and Coors Light. “Most smaller microbreweries lean toward the gnarliest, hoppiest, more aggressive beers. That’s not what we’re into. We wanted to give a new introduction to microbrew.”

The Moscardis got their introduction to brewing like many Americans do: in a garage with friends. What started as a part-time hobby quickly became another full-time business (they also own Royalty Construction). The idea to go big-time beer was sparked after the couple took a couple kegs of their homebrew to a friend’s party and received awesome reactions. But it wasn’t until they were in vacation in Cabo San Lucas, Mexico, that the epiphany hit.

”My wife and I were sitting around at the opening day of Baja Brewing Company saying this sure looks a lot like Pismo Beach,” Tim recalled, “and that was the point when we decided to go for it.”

“It evolved faster than we thought it would,” Tim admitted. “But the brewing business is a lot like the construction business; it deals a lot with electrical and plumbing and it is very hands on.”

Their construction knowledge also helped with the remodelining of their tasting room, as the Moscardis added custom wood trim and granite counter tops. They went with a classic Pismo Beach theme set in the Prohibition Era, making for a casual environment.

“We were trying to make a fun atmosphere where people could come in and feel like it’s their own place,” Tim said. “We want everyone to enjoy it.”

Currently, Pismo Brew beers are available in six-packs at local stores and on tap at local restaurants. The long-term goal, however, is to expand distribution.

“We want to walk in the stores and see it everywhere,” Tim said. “We’re competing with the giants like Bud and Sierra Nevada. It’s amazing to see our beer next to those. We’re just a wife and husband in Pismo Beach.”

Pismo Beach Brewing Company brews on site and uses local ingredients. They boast a rotating line-up of six custom-crafted beers ($4 a pint or $10 for six tasters) and a homemade root beer. Hours of operation are noon to 10 p.m., seven days a week. For more information, call 295-6200 or visit pismobrew.com.

The 4th of July Drive-Thru BBQ benefiting Susan G. Komen for the Cure takes place at the Beach House Bistro in Morro Bay from noon to 4 p.m. Enjoy tri-tip or chicken, beans, garlic bread, salad, brownie, and drink. Pre-sale tickets cost $13, and all proceeds are donated to charity. For more information, visit beachhousebistro.com or call 771-9705. …

Celebrate the 4th of July in style and take a boat cruise from Virg’s in Morro Bay to Cayucos and enjoy the best fireworks show on the Central Coast. Check in by 6:30 p.m. The boat departs Morro Bay at 7:30 and returns about 10:30 p.m. Tickets are available by calling 772-1222 or in person at 1169 Market St. in Morro Bay.