If television and movies have taught us anything, it’s that a gang is only as cool as its home turf.

With its row of flashing vintage pinball machines, killer made-to-order sandwiches, and vast array of cold craft beer, Lincoln Market is more than a neighborhood grocery store and deli. It is also the beloved stomping grounds of the Slam Tilts, SLO’s baddest—and only—pinball gang. 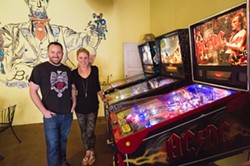 Each week, you can see the ragtag group punching flippers and jingling quarters against a colorful mural of Abraham Lincoln, who reminds customers “to be excellent to each other,” a la Bill and Ted’s Excellent Adventure.

If this sounds sort of old-school, it is.

Lincoln market reflects a time when social media was nonexistent and you were likely to run into everyone you knew—from your third grade teacher to your dentist—at the local market.

Husband-and-wife owners Becky and Mike Hicks believe that picking up a gallon of milk, a box of dish soap, or a hot meatball sub can bring neighbors together in an authentic way. In fact, they’ve seen it happen with their own eyes.

In 2011, after a decade living in the Bay Area and experiencing the quirky, intimate markets found in various neighborhoods, they decided to bring the concept back to their own stomping grounds (Mike was born and raised in SLO; Becky hails from Bakersfield).

“The market was built in 1941 and remains one of the original mom-and-pop grocery stores in SLO,” Mike said. “Historically, each neighborhood would have a meat market and deli. People would come in and buy all of their groceries in one place. Every area had its own spot.”

Lincoln Market hasn’t offered butcher services for a few decades, but it’s still got a heck of a lot of old-school cred. The hangout offers up a chill place to sit down with a killer morning breakfast burrito, shop for locally produced sundries, and maybe even challenge the neighbor kid to a game of Pat Lawlor’s Addams Family pinball. 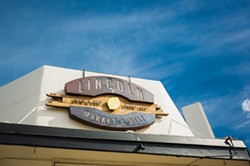 Many New Times readers are old enough to remember this kind of living and, surprisingly, the concept makes sense to Gen Xers and Millennials alike. In an era where people are moving more and more toward the ways of life that their grandparents—or great-grandparents—lived, the idea of farmers’ markets and small, local grocery stores feels as current as ever.

I mean, why go to a big-box store like Target to get your dog treats, diapers, and snacks when you could support your neighbor’s business (and all the local businesses your neighbor supports) right there in your backyard?

Ah—if only there were a Lincoln Market tucked away into every corner of SLO town!

“We carry the stuff we like, and hopefully other people like it too,” Mike said, adding that he always takes requests from local people. “Our niche is focused on quality. That’s just like our sandwiches, too. The recipes are simple, but we elevate them by creating our own sauces and adding interesting flavor profiles.” 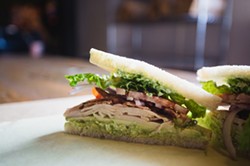 When the couple purchased the market in 2013, they both—very wisely—respected the sandwich items that had become local institutions. Instead of reinventing the wheel, Mike (who helped open up Eureka Burger in downtown SLO) and Becky (who spent time managing the Madonna Inn) injected their own personality into the old-school faves. It goes without saying that everything is made fresh to order.

“We cook our roast beef in-house; we just try to do as much here from scratch as we can because it just tastes better that way,” Becky said.

A few recommendations, dear readers: The Almost Famous Breakfast Burrito is a massive ode to traditional morning grub, bolstered by a from-scratch chipotle sauce that earned the right to dribble down my chin. The Tassajara Delight sandwich is a highly splittable monster of sourdough, turkey, bacon, and avocado drizzled with a bright, tangy honey-jalapeño sauce that kicks you in just the right pain-pleasure centers of your brain.

Don’t even get me started on the hot sandos. Where else in town can you get a steamy meatball sub made with handmade meatballs and freshly  crafted marinara?

“The menu is a group effort and everyone in the kitchen likes to riff off each other,” Mike said. “Everyone around here loves pulled pork, but maybe they haven’t eaten it in a bang mi style sandwich with pickled carrots and cilantro. We do little things like that—twisting ideas to make things our own style.”

Events, including tastings with local beer and wine producers, happen sporadically (check the market’s Facebook page), but impromptu community events are often. In this way, the space transforms itself into a well-worn living room.

Regulars are now used to coming in during the lunch rush and seeing Becky with her eight-month old baby on her hip (the 2-year-old likes to run around freely).

“Most events we do for the neighborhood. It’s the mom-and-pop feel we want to bring back,” Mike said.

Like the neighborhood, Lincoln Market’s customers are a diverse cross-section of humanity. College students, young parents, 40-year residents, and empty nesters rub elbows on the daily.

“They are the ones who really support us and this market; they want to keep Lincoln Market here,” Mike said. “Essentially, this is their place. We are just stewards of it.”