Turn back the clock while you eat

If the upcoming release of the redone Hairspray with local celebrity Zac Efron has boomers yearning for the good ol' days, I've got just the fix they need. Head over to Oceano for breakfast, lunch, or dinner at the Rock & Roll Diner, where they're serving old-school burgers, fries, and shakes. Not only do they have every treat you relished as a teen, you'll relive sweet 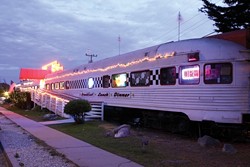 # memories of the times when Chuck Berry and Elvis blasted early rock 'n' roll from jukeboxes in drive-ins, hamburger joints, and homey diners just like this one.

The Rock & Roll has everything from Bill Haley and his Comets to the Beach Boys rockin' the two dining cars from an ancient jukebox. Sans the usual woody trim, this one was originally made for the Flamingo Hotel, so it's pretty in pink if a bit worn from wear like the interior of the old rail-cruisers. The Coca-Cola wallpaper barely peeks out from behind the miniaturized movie posters featuring legends Joan Crawford, James Dean, and Marilyn Monroe. The cozy booths in metal-flake red-and-white vinyl befit the scene. The atmosphere certainly took me back to the days when my daughter Barbara named her first kitten Potsie. She was crazy about Happy Days.

No boomer could forget that popular old television sitcom about the Cunningham family and the Fonz, who appeared on primetime TV from 1974 until 1984, nor will our kids who watched it with us. I tried to dissuade my precocious little girl: "Barb, couldn't you name her after someone cool, like the Fonz?" Now an entrepreneur, she still retorts: "Fonzie wouldn't have been a fitting name for a cute kitten."

A recent lunch at the Rock & Roll Diner in Oceano brought back that long-forgotten memory, and many others. I enjoyed sitting inside the kitschy train, a true American diner, watching the bustling servers. Whenever the wait staff delivered decadent treats like tall, frosty milkshakes crowned with whipped cream and a glistening cherry Shirley Temple sodas giant platters heavy with hamburgers and fries or Fred Flintstone-sized beef ribs with a bowl of chili beans it elicited squeals of delight from the kids. They seemed to enjoy it even more than their nostalgic grandparents.

#  Now before you Happy Days fans get all riled up, I know the place where Richie, Potsie, and the Fonz sucked up cherry cokes and hamburgers was Arnold's Drive-In, but they regularly ate inside the place too. In fact, I describe this place as a "true" diner because it befits the Webster's Dictionary description: "a restaurant in the shape of a railroad car."

But this is no pre-fabricated structure built on an assembly line. It's the real deal. The restaurant is made from two railroad cars that originally served as the diner car, with the full-sized kitchen and club car with the bar intact, according to owner Marios Pouyioukkas, a native of Cyprus who studied hotel and restaurant administration at the University of Nevada, Las Vegas.

Pouyioukkas was working in L.A. when his cousin moved to Santa Barbara to open a Greek restaurant named Aphrodite (now defunct). He moved here after buying the old restaurant, which had been closed for several years. Pouyioukkas says it took him nearly a year and a half to refurbish it, updating the kitchen with stainless steel, new refrigeration, fryers, and a grill. They opened in January 1998. The owner describes himself as the "executive chef" and says he created the menu and recipes, adding Greek foods with a "Cypriot flair" (in tribute to his homeland's cuisine, which is a blend of Greek and Turkish dishes).

"One of my motives was to give people what they want," Pouyioukkas said, explaining why he combined a typical diner menu with Greek foods and healthy alternatives. "We do everything American-diner style. Nobody leaves hungry."

# In full disclosure, I don't eat hamburgers or fries. Nor do I drink milkshakes, even if they are chocolate. So when I dined here, I skipped past fried foods and went with Pouyioukkas' Greek selections. Like everything else, even the small Greek salad was generously portioned and too big for my appetite. On a second visit, I tried the baby back ribs, one of the few fatty meals I still relish occasionally. Although the ribs were tender, I didn't like the barbecue sauce. The mashers, noted on the menu as "real mashed potatoes," had the appropriate chunkiness, but I disliked the heavy brown gravy covering them. Nevertheless, I heard satisfied diners all around me expound on their meals in high praise.

If you're overly picky, this isn't your place, and service was slow during both visits. But if you're out with the family to take in the boundless energy of Hairspray and you've worked up an appetite, this is the place to find. A meal at the Rock & Roll Diner will be akin to joining the Cunninghams for a dessert that's a sweet conclusion to your trip down memory lane.

Support the hand that feeds you at the second annual Mano Tinta Release Party at Talley Vineyards on Aug. 4, noon to 3 p.m.

# If you didn't attend this fundraiser last year, you certainly won't want to miss the upcoming new release party, taking place at the esteemed Talley in Arroyo Grande Valley. Mano Tinta, which refers to the red hand of the farm worker, is a 2005 red blend made from donated grapes, including Syrah from Talley, Tempranillo from Laetitia, and Petite Sirah from Wolff vineyards. New at this year's event is a special bottling of Mano Tinta featuring Talley 2005 Pinot Noir, their first East Rincon Vineyard release of which there are only 150 bottles in commemorative magnums (double-sized bottles). Everything necessary to produce these wines including labor, bottles, labels, and corks was donated, and 100 percent of proceeds from its sales benefit the Fund for Vineyard and Farm Workers.

This fund was established by Brian and Johnine Talley in 2004 to provide grants for medical, dental, and educational organizations that assist vineyard and farm workers throughout SLO County. In 2005, they achieved their initial goal of raising $100,000 and they're resolute in trying to raise that amount annually. Because all proceeds from the wine sales go to a charity fund, Mano Tinta can't be sold in retail stores but you can buy it online or at Talley Vineyards' tasting room. For more information about donations or wine or ticket purchases, visit www.talleyvineyards.com and click on the link for the Fund for Vineyard and Farm Workers. If you can't attend the event, you can still support the fund with the purchase of just a single bottle of Mano Tinta.