The case for campaign finance reform in Atascadero

# This data and that which follows is the result of a thorough and painstaking analysis of all of the campaign finance forms filed by the candidates since the 2000 election. I am grateful to Kevin Ashley for inputting this mountain of data into a database that can be analyzed in various ways. This data has been checked and double-checked and we have absolute confidence in its accuracy. Certainly it is more accurate than the forms filed by the candidates themselves, which contained several errors ranging from 1 cent to $1,000. Unless

The money for these increasingly expensive campaigns comes from a growing number of large donations, much of it provided by real-estate agents, developers, and construction companies. In 2000, six candidates received three contributions of more than $500. In 2006, six candidates (including in the two-year race) received 24 such contributions, a seven-fold increase.

It would be foolish to discount the effect that money has on an election. In each of the four elections studied, the two candidates who raised the most money won.

Most citizens, when faced with these financial facts of life, would probably abandon any thought of running for Atascadero City Council unless they had access to large sums of money. So when folks say, "If it's not broke, don't fix it," I point out these facts and say I believe it is broken.

Because of this, we asked the City Council to address the issue of campaign finance reform. During the strategic planning session in February, three of the five City Council members agreed and asked staff to submit a draft ordinance. 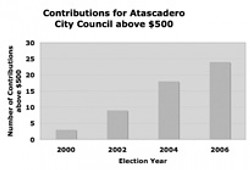 # This draft ordinance states that the aim of campaign contribution limitations is " to protect the integrity of the electoral process since local government should serve the needs and respond to the wishes of all citizens equally, without regard to their wealth." It goes on to state " the financial strength of certain individuals or organizations should not permit them to exercise a disproportionate or controlling influence on the election of candidates for municipal office."

The draft ordinance attempts to accomplish this primarily by establishing a contribution cap of $250 to individuals running for office. It is important to note that such a cap does not apply to fundraising efforts for measures or initiatives, nor does it apply to what a candidate can contribute to his or her own campaign. The Supreme Court has ruled that a cap in such instances would be an unreasonable infringement on free speech.

The Fair Political Practices Commission uses $250 as the trigger point for recusal of some public agency officers. Between 2000 and 2006, 90 percent of all contributions were below $250. Setting the cap at this amount seems reasonable. It would have no effect on the vast majority of citizens who choose to financially support their favorite candidates, but would prevent " certain individuals or organizations [from exercising] a disproportionate or controlling influence on the election of candidates for municipal office" (this is from the draft ordinance).

Some of us have said that businesses, unions, and other groups that are not individuals should not be allowed to make political contributions. The draft ordinance allows such organizations to make contributions, but the amount is counted toward the cap of the individual " financing, maintaining, or controlling the contribution." This allows these groups to make donations in a manner that is fair to all. No one gets to donate twice.

An item that we asked for but is not in the draft ordinance concerns petitions. Currently, a citizen can ask someone gathering signatures for a petition whether they are being paid to do so and if so, by whom. It is a misdemeanor to reply falsely to this question. We have proposed that such terms be clearly stated on each page of any petition that is circulated. We hope to have this provision added to the ordinance.

Thirteen counties and 96 cities in California have a cap on contributions. As the statistics presented here show, the threat that big money may gain a strangle-hold on local politics is quite real. It is time for Atascadero to become No. 97.

The city council has directed staff to schedule a public workshop on campaign finance reform in September. Let's start discussing this issue now so we can go to the workshop informed and with suggestions on how to draft an effective and fair ordinance. ?

Mark Phillips lives in Atascadero. Send comments to the editor at rmiller@newtimesslo.com.