Photo Courtesy Of Cooking With A Side Of Sunshine 'BEAUTY AT FIRST SIGHT' Food blogger Nancy Waltz sampled blueberry cream, lemon, and chocolate flavors at Monika's Macarons in San Luis Obispo on July 31.

Macarons and macaroons derive from the same Italian word maccherone—meaning paste, pasta, or pastry—but they are completely distinct cookies. The semantic difference boils down to an extra "o," but the taste difference is worlds apart.

Monika Anderson's macarons are definitely not American drop cookies made with shredded coconut. They are delicate French confections that look like works of fine art.

Anderson, owner and founder of Monika's Macarons in downtown San Luis Obispo, was raised on the Central Coast in a hotbed of culinary and artistic talent. Her primarily French-born family includes amateur chefs on the female side, and professional artists on the male side.

Her mother and late grandmother instilled in her a love of French-inspired cuisine, while her artistic talents flourished under her father, Lucasfilm artist Steve Anderson, and her stepfather, the late Andy Lakey, known for his depictions of angels. 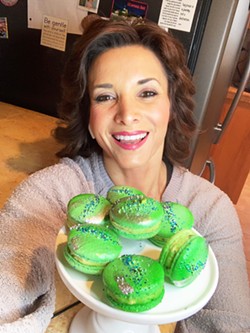 Lakey's paintings and mixed media are displayed across the globe in private and public collections, including the Blind Children's Center of Los Angeles. Anderson was most impacted by her stepfather's tactile pieces, which he referred to as "sensualism."

Monika's Macarons, which opened its doors in January 2021, is an ode to Lakey's efforts to enable artistic appreciation through touch. Only Anderson has taken his vision one step further with the sense of taste.

Food blogger Nancy Waltz, of Grover Beach, visited Anderson's bakery recently, intending to simply sample a macaron, but she was instead blown away by the sensorial impact of food as art.

The immersive experience begins as soon as you enter the shop, with its "warm, inviting, French farmhouse" ambience, said Waltz, who publishes the blog Cooking with a Side of Sunshine.

Waltz tried the blueberry cream, lemon, and chocolate macarons. She noted the "light, crispiness of meringue followed by a gratifying chewiness of a decadent spongy layer before my taste buds were introduced to the creamy filling."

"I savored each bite, taking in the perfect balance of sweet, creamy, and chewy nuances, and smiling throughout the entire experience," she said.

She was equally impressed by the visual presentation.

"They were beautiful and artistic," she said. "I loved the ombré and dazzle of edible glitter." 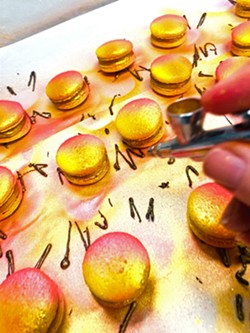 Anderson painstakingly airbrushes her macarons with food coloring, then lightly dusts several flavors with 24-carat edible gold. She said, oftentimes she's at the bakery 10 to 12 hours straight, six days a week, but "no matter how exhausted I am, painting and decorating is the part that re-energizes me. My work is an interesting combination of art and pastry."

It also takes her back to her apprenticeship with Lakey, who used 22-karat gold leaf applied to mixed media surfaces for his angel series.

Anderson performed detail work for Lakey from 1996 to 2010, assisting with thousands of pieces.

"That's where my inspiration comes from as far as what the macarons look like," she said.

Lakey's passing in 2012 coincided with the launch of her macaron business, which had begun several years earlier as a hobby. She started selling her artfully decorated macarons out of EAT Marketplace in Temecula, where she resided for more than a decade before returning to San Luis Obispo in 2018.

After a short stint as the pastry chef at Los Osos' Blue Heron restaurant, she decided to open her own bakery.

In 2020 she found the perfect spot next to Big Sky Café on Broad Street, then COVID-19 shut down the state's nonessential business sector. Rather than despair, she used the time to decorate her new 2,400-square-foot shop and fine-tune her recipes, the crown jewel being her grandmother's version of French buttercream.

Anderson said flawless buttercream is the key to the macaron's flavor. The outer meringue-based layers provide a beautiful presentation for the heart of the pastry, Anderson said.

"I use a buttercream containing highly whipped eggs with sugar that gets cooked down and reduced, then you add butter to it when it cools," she explained. "Then I will add natural flavoring, such as pistachio nut and almond extract for the pistachio macarons. I do not use artificial flavors. Period."

Anderson also offers more than macarons. Her display case is filled with a wide assortment of handcrafted pastries and savory items, all of which are gluten-free. Her tea comes from nearby organic herb shop the Secret Garden, while her coffee is imported from Washington state. 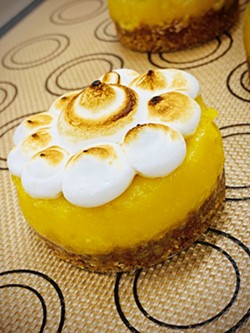 Her products and ingredients reflect her motto to source responsibly—always—and locally, when possible.

Her motto is also a nod to EAT Marketplace owner and founder Leah Di Bernardo, who Anderson credited with giving her business its start and, on a grander scale, instilling in her the principle of supporting ethical food suppliers.

She added that she's in the process of finding fresh, local eggs. If she can't find local products that meet her standards, she'll branch out beyond the Central Coast.

Her coffee beans, for instance, come from Roast House in Spokane. Roast House is owned by Di Bernardo's sister, Deborah Di Bernardo, who will travel as far as Africa to meet growers and confirm ethical practices.

Anderson believes "it's critically important to make sure the dollars we spend go to work making the world a better place."

The bakery's—which also contains a small retail shop with home-décor items—hours of business have been evolving over the past six months as she hires more workers and adds more products.

Additionally, she is working on a beer and wine license.

"We want to do a mimosa bar," she said. "We can do some cute pairings with macarons and maybe decorate the glasses with matching colored sugar rims.

Anderson's new venture has been fulfilling, but there's one item left on her agenda.

"I'm happy to be able to honor what I learned from Andy," she said. "It's a very personal process for me when I airbrush the macarons. I feel like he gave me this gift that I get to share with others."

But he had one more request—that Anderson continue his work in "sensualism" by teaching the tactile art form to others. The method uses raised paint on textured wood, and, of course, heavenly symbolism.

"I'm the only person he taught this technique to," she said. "I want to share his vision and gift to the world."

In San Luis Obispo, at least one customer, food blogger Waltz, thinks she's already honoring his legacy, as well as her grandmother's.

Anderson's pastries were "beauty at first sight," Waltz said. "And I walked away with a dozen more macarons ... for personal research." Δ

Flavor Writer Cherish Whyte is into "personal research." Reach her at cwhyte@newtimesslo.com.