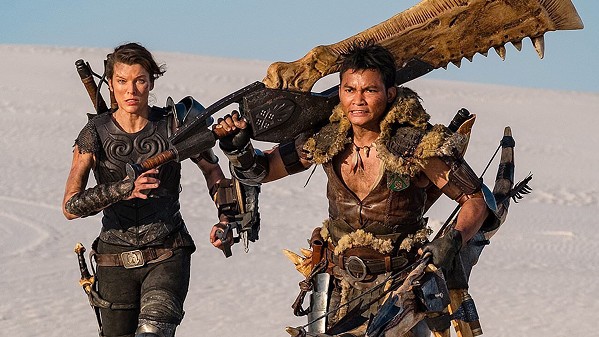 Writer-director Paul W. S. Anderson (Resident Evil, Alien vs. Predator, Death Race) helms this video game adaptation about Capt. Artemis (Milla Jovovich) and her U.N. Security soldiers who are transported to a new world where they fight for survival against giant monsters with special powers. Their best hope for survival is to team with Hunter (Tony Jaa), who lives in this hidden realm and is trained to hunt and kill Diablos, a subterranean horned monster.

Is it dumb? Yes it is! Is the acting mediocre? Hell yes! But are there giant monsters causing mayhem galore? Totally! And sometimes that's enough! This is a ridiculous B movie with an absurd fantasy plot, but the creatures are cool, and the stunts are amazing.

Do you want to see Ron Perlman in a Dolly Parton-esque wig? Of course you do! Do you want to roll your eyes at dialogue from one of Artemis' soldiers who says, "This shit is way above my pay grade?" Sure you do! This is big-budget trash at its finest! (103 min.) Δ