Monument Board Shop will close

It's been a wild ride for ten years. 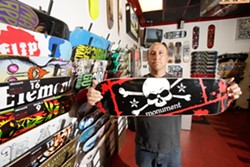 Since opening in 2000, Monument Board Shop has become prominent in SLO County skate and surfboarding culture. But the tough economy and competition from outlet stores has forced co-owner Billy Wallace to close his shop in mid-September, he said.

When Monument was created, the mission of Wallace and cofounder Gary Ellsworth was simple: They wanted a space that could become a home-away-from-home for kids who were using the Grover Beach skate park. Within five years they changed locations twice, more than doubling the size of the store, and added surfing gear to their wares. It was during their latest expansion to 1402 Grand Ave. in Arroyo Grande that Bud Aquino joined Monument as a manager and then as a partial owner.

Wallace describes the shop as “specializing in the surf and skate lifestyle.” It’s stocked with skateboards, surfboards, shoes, apparel, and local artists’ work, all of which will be discounted by 30 percent to 50 percent during August.

In Wallace’s opinion, what really separates chain stores from neighborhood shops is participation in the local culture. As the owner and manager of a shop that founded the Central Coast Monster Skate Park Series, hosted and endorsed many skate contests, fully sponsored both a skate team and a surf team, and established parking-lot sales for local vendors, Wallace has seen first hand the rewards that come from a personal relationship with the community. In a final press release Wallace and Aquino thanked their customers “for their loyal support of what we felt was truly a shop for the locals and part of the fabric that makes up this community.”

During the past two years, Wallace and his team have seen their revenue drop by more than 60 percent. Wallace attributes the lean times to the flagging general economy and a shift that has occurred in the skate and surf industry during the last decade. With a “corporate” orientation on the rise, “core shops” have been faced with a choice of expanding to compete or relying on area support.

Big-box stores are fine for generic shopping, Wallace feels, but when it comes to specialty items, people should support their local merchants. He argues that one-stop-shops may be more convenient but the small businesses are informed about local happenings and stock unique products. “People need to wake up and remember to support the independent shops that they grew up on or they will disappear as well,” he warned.

Tutta Bella Salon is soliciting donated backpacks filled with back- to-school supplies, which will be given to SLO County children in need before school begins in the fall. The final date to drop off donations is Friday, Aug. 14 at 6 p.m. Take donations to the salon at 1750 El Camino Real, Suite E, in Grover Beach. Contact Chrissy Marinez at 489-4589. …

The Make-A-Wish Foundation has granted the wishes of more than 900 children in the SLO County who have had life-threatening medical conditions, but their Tri-Counties office in Ventura at 4222 Market St., Suite D needs donations for their toy shelf. A list of toys that are needed is available at tri-counties.wish.org. SLO volunteers accept and deliver locally donated toys. Contact Shanna Taylor at 676-9474 or staylor@tri-counties.wish.org. …

The Area Agency on Aging will be issuing senior Farmers Market coupons, which can be exchanged for fresh, nutritious foods at all farmers markets throughout San Luis Obispo and Santa Barbara counties. All individuals who are at least 60 years of age and who have household incomes of no more than 185 percent of the federal poverty income guidelines are eligible for coupons. Contact the Area Agency on Aging at 1-800-510-2020. …

The Exploration Station invites teachers and school administrators to help students who need but cannot afford computers to apply for them through Computers 4 Youth. Call Ellen Wood at 473-1421 Ext. 2 on Wednesdays from noon to 5 p.m.